Louisville, Michigan fans out in full force at the 2013 Final Four in Atlanta

On the eve of the Final Four, Atlanta has been overrun by four fan bases with four very different outlooks on Saturday's action.

Share All sharing options for: Louisville, Michigan fans out in full force at the 2013 Final Four in Atlanta

That the Wichita State contingent of fans are outnumbered in Atlanta should come as no big surprise. The Shockers are massive underdogs in their first Final Four appearance since 1965, currently getting 10.5 points from No. 1 overall seed Louisville. The spread makes the Cardinals the second biggest favorite in a national semifinal since 1985.

Predictably, the Buckhead region of Atlanta is overrun with Louisville fans. It's also decently populated by Michigan fans and lightly occupied by Syracuse fans.

We've been there for over half an hour before we get our first taste of Shocker fandom. 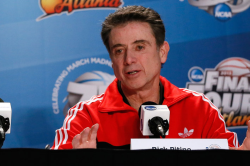 It has been 27 years since the Louisville Cardinals claimed their last national championship, and 16 years since Rick Pitino won his last title. Both of those facts could change in three days.

Almost every conversation with a small group of Wichita State fans goes the same way: There's an introduction, a "what do you think your guys chances are" question which is met with "Woo! We're gonna shock the world!" or some slight variation from the members of the group not being interviewed, and then an admission. "It's not looking good, but we're hoping for the best" is a popular line.

As if facing off against a Louisville team that has won three of its four tournament games by more than 20 points wasn't challenge enough, the Shockers are also fighting against history. Wichita State is just the second No. 9 seed to crash the Final Four, and would be the first to win a game there. The 1979 Penn Quakers are the only other 9th seed to claim a regional title. That team lost to Magic Johnson and Michigan State by 34 in the first national semifinal before also falling to DePaul in the third-place game.

As for the prohibitive favorites, Louisville fans, for the most part, are about as confident as you'd expect. While a few allowed themselves to brazenly look ahead towards a potential matchup with Michigan or Syracuse in Monday's national championship game (alcohol helps the process along), most were pulling the "you can't look past anybody, but I like our chances" routine.

"It definitely feels like our year," said Cardinal fan David Simms. "Especially with all this (injured guard Kevin) Ware stuff. It feels like, finally, it's meant to be for Louisville. I like our chances against Wichita, but it's the Final Four, of course anyone's good enough to beat anyone else."

Behind Louisville, the second strongest contingent in the A is clearly Michigan. Though they're trailing in numbers, the maize-clad clan has "Card Nation" defeated -- at least based on the small sample size a post-midnight hour in Buckhead provides -- in a pair of areas: confidence and inebriation.

"Oh we're gonna beat Syracuse," said Michigan man Mike Cosenza with his friends shouting indiscernible agreement in the background. "And then we're gonna beat Louisville or Wichita or Ohio State or friggin' ... Miami or whoever in the championship game."

Their orange garb makes the modest number of Syracuse fans pretty easily identifiable. They're mostly keeping to themselves and looking annoyed when the latest "C-A-R-D-S" or "Let's go Blue!" cheer breaks out.

To my surprise, there's no mention of either the Fab Five or Michigan football at any point. Cosenza's focus is impeccable.

Their orange garb makes the modest number of Syracuse fans pretty easily identifiable. They're mostly keeping to themselves and looking annoyed when the latest "C-A-R-D-S" or "Let's go Blue!" cheer breaks out. They're also the most likely group of people to engage in a serious basketball conversation.

"We have to keep (Michael) Carter-Williams' confidence as high as it's been," said 'Cuse fan Paul Bennett. "He's the key. Obviously Trey Burke is going to be the focus but we can't let Stauskas beat us by going apesh-t and hitting eight threes or something. I think the first 10 minutes are huge. If they're looking frustrated by the zone then, then they're probably going to be frustrated by it all night. The other th--"

He's interrupted by Louisville fans breaking into yet another "C-A-R-D-S" chant.

The games haven't started in Atlanta, but the love is spreading.