The 2013 national championship will feature a classic battle of offense against defense as Michigan and Louisville match their strengths against one another.

The 2013 NCAA Tournament will conclude with a great battle on Monday night, matching two teams with opposite strengths in the Louisville Cardinals and Michigan Wolverines. The top-overall seed Cardinals are built on strong defense, while the No. 4 seed Wolverines rely on the nation's most efficient offense.

Louisville (34-5, 14-4 Big East) holds the top-rated defense in the country, while Michigan (31-7, 12-6 Big Ten) has the best offense in terms of Ken Pomeroy's efficiency ratings. The Cardinals have relied on their pressure defense all season, forcing turnovers at an alarming rate and limiting opposing teams to just 0.824 points per possession according to Eamonn Brennan. Louisville's defense is based on full-court pressure, forcing turnovers on 27.3% of their opponents' possessions, and finishing second in the league in steals per game behind only VCU. 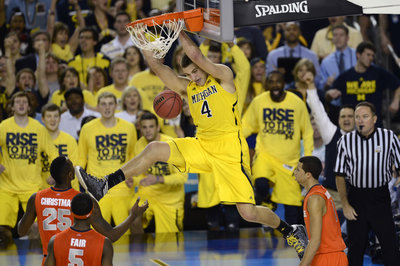 Before Michigan plays in the national championship game Monday night, let's take a closer look at Mitch McGary, and why he's the best.

To reach the championship game, Michigan has already had to overcome some of the best defenses in the tournament. In the Round of 32, they throttled VCU's turnover-inducing defense with a 78-53 win. Then in their next three games they beat the No. 5, No. 3, and No. 6 Ken Pomeroy-rated defenses in Kansas, Florida, and Syracuse (Louisville is No. 1).

The battle could ultimately come down to the point guards. Michigan is led by national player of the year Trey Burke, the best offensive point guard in the country, averaging 18.5 points and 6.8 assists per game. But Burke will face a stiff test from Louisville senior Peyton Siva, the heart of Louisville's defense. Siva averages 2.2 steals per game and is a constant pest to opposing point guards. If he can frustrate Burke it may spell the end for the Wolverines.

Both teams barely advanced through their Final Four games on Saturday night, with Louisville needing a late run to top tournament Cinderella Wichita State and Michigan holding off a late run by Syracuse.

This is the first appearance in the national title games for the Wolverines since the Fab Five lost back-to-back championships in 1992 and 1993. It is the first trip back to the championship for the Cardinals since they won the 1986 title. This will be the first time coaching in the NCAA Tournament final for Michigan coach John Beilein, but Louisville coach Rick Pitino won the 1996 championship while at Kentucky (and lost in the 1997 title game).