Rick Pitino's press has been a signature of his teams for decades. John Beilein's team, on the other hand, is completely unlike the ones that got him to where he is -- but significantly scarier, on offense and defense.

To get to the national championship game, Rick Pitino continued the strategy that's made him a successful coach stop after stop. John Beilein abandoned his.

Styles make fights, and the two coaches have crafted monsters who match up perfectly: Pitino's Louisville Cardinals are the best defensive team in the country; Beilein's Michigan Wolverines, the best offensive team.

But before we do analysis or whatever, let's start with some goofy similarities between the two guys, huh? People like this stuff! Both are 60 years old! Both are from New York State -- Rick's from the city, John's from Burt, N.Y., which is a place. And get this: both have sons who are also coaches! Rick Jr. just took the head coaching job at Minnesota, Patrick -- once a West Virginia player under his dad -- now coaches West Virginia Wesleyan. Boy, apples and trees and whatnot! AND GET THIS: Rick Pitino almost took the Michigan job a while back! Crazy. Did you guys like this paragraph? You will hear it on TV maybe, if the camera ever cuts away from Kevin Ware.

But when it comes to the squads, they had different methods.

Beilein has a reputation as a coach with a strong, easy to identify system. Never an assistant, he methodically worked his way up the coaching ladder -- Erie Community College, D-III Nazareth, D-II Le Moyne, Canisius, Richmond, West Virginia, and now Michigan -- with a common theme. His squads were never superior talent-wise, and they played a style that tried to make up for that defeciency, gunning ad nauseum and running an unconventional zone.

But the Michigan squad that will take the floor with the national title on the line Monday doesn't match the defining characteristics of historic Beilein teams.

His trademarks were things set to keep teams with strong shooters -- but iffy athletes -- in games long enough to knock off more talented opponents. On offense, he'd spread the floor and have his squad jack up threes. In his first 10 years as coach between West Virginia and Michigan, Beilein's teams took at least 40 percent of their shots from beyond the arc in all but one season, his first with the Mountaineers. Four times, his squads were in the top 10, proportionally, in percentage of shots from beyond the arc, and they never finished lower than 50th. For Beilein, it worked: Kevin Pittsnogle shot the Mountaineers to some tourney wins, and his first few Michigan teams banked on guys like Stu Douglass and Zack Novak being able to connect regularly from deep.

This year's Michigan squad only shoots 34.1 percent of their field goals from beyond the arc, 147th in the country. It's a huge departure from what Beilein's done, but it fits the personnel. Trey Burke explodes off the dribble, and can score or find anybody for an easy hoop. Glenn Robinson III and Tim Hardaway Jr. can each make moves on the bounce as well, and Mitch McGary is one of the more talented post players Beilein's ever had. They're all capable shooters, and having Nik Stauskas squared up at all times doesn't hurt, but this unit doesn't need threes to keep them in games. They just give the ball to guys who are better than their opponents and let them go to work. And as such, they're the No. 1 offense in the country -- 121.7 points per 100 possessions.

And on defense, Beilein became known for the 1-3-1 zone. It's a freaky little set that I've been unlucky enough to watch for years as a Northwestern fan. When executed well against a team that hasn't prepared a lot, it gives fits, and most importantly, minimizes the ability of an opponent to exploit mismatches by not allowing any real one-on-one play. The ballhandler gets hounded, turnovers happen. It has the potential to be a giant-slayer. But if you do some homework, its easy to beat. At any point, a team going against the 1-3-1 zone can get an open three or open layup with three or four smart passes. And if teams do miss, the center is playing in the high post instead of under the basket, so there's opportunities for second-chance points. Beilein's coaching profile backs this up: his teams typically have had decent turnover rates, but defended poorly on twos and threes, with opponents having high assist rates passing to easy baskets. Oh, and offensive rebounds. Lots of offensive rebounds.

Beilein barely played around with the 1-3-1 this season. He didn't need to. It would have been effective -- well, more effective than when Northwestern uses it -- but it would have been pointless to have it serve as the base defense of this team. It's good as a gimmick or a change of pace. But Beilein pretty quickly realized this team would be better matching up than going with the same old system he'd always used. This is one of Beilein's worst teams at forcing turnovers due to the lack of zones, but it's one of his best in virtually every other defensive category. Its 91.6 points allowed per 100 possessions is Beilein's best between West Virginia and Michigan. 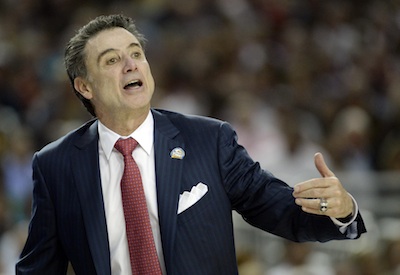 It's been 27 years since the Cardinals claimed their last national championship, and 16 years since Rick Pitino won his last title. Both of those facts could change Monday night.

If you don't know Rick Pitino, maybe you haven't watched much college basketball in the past few decades. So here's a summary: he started out at Boston University, turned them around, brought Providence to the Final Four, had some mixed results as an NBA coach, won a national title at Kentucky and has turned Louisville into a powerhouse.

The key? Pressure. Since back when he headed up the Terriers, Pitino has opted to run full-court press from the tip to the final whistle. Pitino plays a match-up press rather than the more typical strategy of assigning players to zones, with lots of rules about when and when players shouldn't double. The New York Times wrote about how he implemented the zone at BU, at Providence, he threw Billy Donovan into the mix -- and Donovan is now a proponent of the press at Florida. At Kentucky, Tony Delk, Derek Anderson, and Ron Mercer spearheaded a furious press that earned a national championship.

And that brings us to Louisville. Although this is the most success it has had, Pitino's squads always have been strong on defense. This is their sixth season with a top-five defensive efficiency, and second straight where they've led the nation -- they only allow 82.4 points per 100 possessions. Opponents turn the ball over on 27.3 percent of their possessions, the second-highest turnover rate in the nation. Some of that's due to Peyton Siva and Russ Smith, who can harass ballhandlers end-to-end. (It also helps to have Gorgui Dieng capable of blocking shots if the press does get broken.)

Although it probably made one guy significantly less comfortable, both coaches figured out the optimal style to make their team's personnel successful in 2013, which is pretty much all you can ask from a guy in charge. As a basketball nerd, I'm a little bit geeked to see how each team does in the season's final game. Michigan passed around and shot over Syracuse's zone in their other Final Four game, while Louisville's defense hasn't shut teams down -- but it has caused enough havoc in stretches and its offense has carried the weight. Which one wins? We're T-24 on hearing that Luther Vandross song, and we'll just have to wait and see.