Before Michigan plays in the National Championship Game Monday night, let's take a closer look at Mitch McGary, and why he's the best.

We need to talk about Mitch McGary. The national championship game is Monday night in Atlanta, and there are plenty of stories to discuss--Kevin Ware and how he's inspired Louisville and millions of others, how it's been 20 years since Chris Webber's timeout in Michigan's last title game, or Louisville and Rick Pitino, gunning for the state of Kentucky's second straight national title. There's also Russ Smith and Trey Burke, pretty much everything you could ever want from college point guards, and of course the NCAA, that greedy hypocritical beast that makes all this possible AND makes it almost impossible to love, because loving the Final Four just feeds a system that makes no sense and exploits everyone who makes it special. We could hit on any of those stories.

But we need to talk about Mitch McGary. 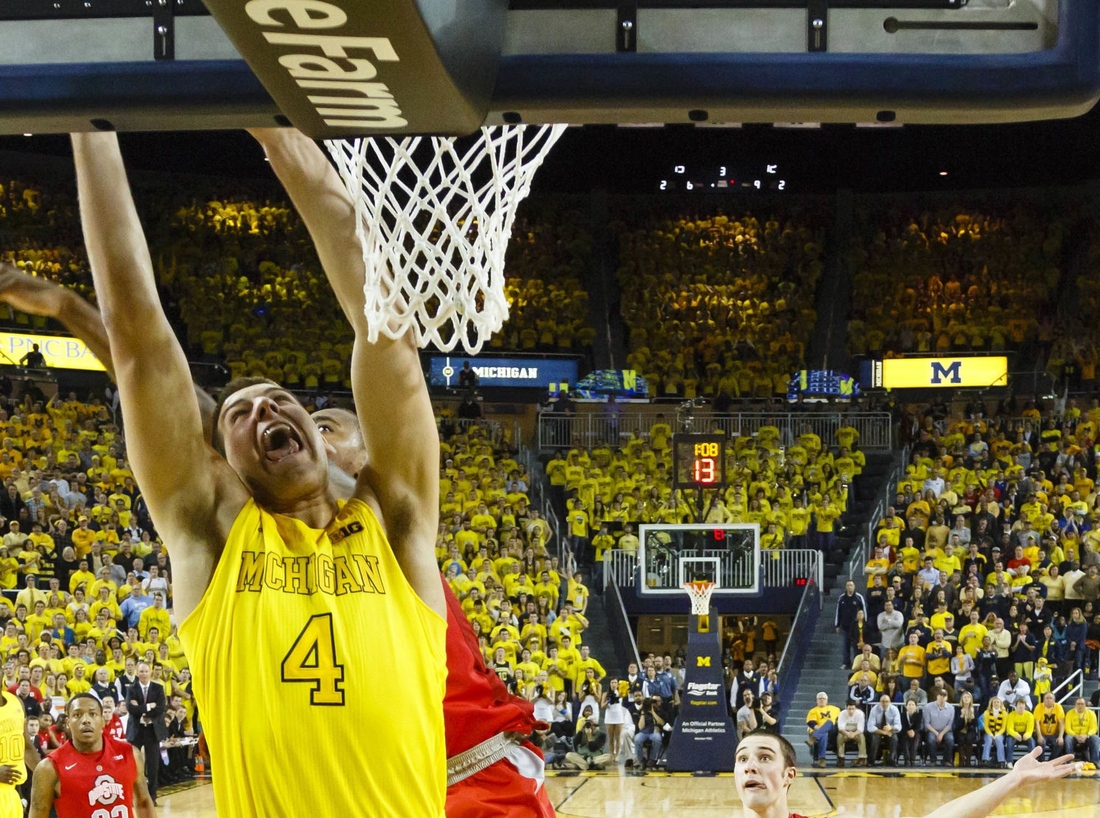 Back before the tournament began, as part of other rambling predictions that look pretty awful right now, we said this: "there's no college basketball player more fun than Mitch McGary, the goofiest almost-good player college basketball has seen in years. He's like a puppy who hasn't totally grown into his body yet, which means it's way too much fun watching him careen all over the court before his flying limbs inevitably lead to at least three stupid fouls and/or turnovers. I want to legally adopt Mitch McGary just for entertainment's sake."

But that was just the beginning! Nobody had any idea McGary was going to go off and become the most valuable player of the entire tournament, retain all his glorious awkwardness, AND turn himself into a top 10 NBA draft pick in a matter of three weeks.

He's still a yellow lab puppy in a 6'10 white guy's body, but now that he's put it all together after an up-and-down freshman year, McGary is also the biggest reason Michigan has made it to the title game. (That, and Trey Burke going superhuman against Kansas.) So with that in mind, let's get to know the most important player in Monday's title game.

1. Where did Big Mitch come from?

Abraham Lincoln was from Perry County, Indiana. Sean Combs is from Mount Vernon, New York. Oprah Winfrey is from Kosciusko, Mississippi. Bruce Springsteen is from Long Branch, New Jersey. And one day someone will ask, hey where is Mitch McGary from?

Per Wikipedia, notable Chesteron natives include Jenna Fischer of The Office, and comedian Jim Gaffigan, which is pretty cool because both of them are great. And now we can also list MITCH MCGARY, SIX FEET 10 INCHES OF PURE SEX, OUT HERE PUTTIN CHESTERON ON THE MAP EVERY GODDAMN DAY. (Someone should really add that to the Wikipedia.)

Yes, but it took a while. Again working from Wikipedia, McGary played JV basketball as a freshman and his father made him quit football after he played varsity his freshman season. Once he started growing and basketball became his obvious calling, he repeated his junior season because his parents thought transferring to a different, more disciplined high school would be good for him. McGary has been diagnosed with ADHD, a fact that isn't even a little bit surprising to anyone who's ever watched him play basketball.

Anyway, he was ranked the 92nd best player in his class in March 2011, but after tearing up the summer camp circuit he wound up the no. 2 prospect in his class by the following spring, choosing between Kentucky, Duke, Michigan, UNC, Florida, and Maryland.

YES. And God, that would've been awful. Both his parents loved Mike Krzyzewski, but Big Mitch ultimately chose Michigan to play with Glenn Robinson III, his best friend after years of playing on the same AAU team. (Note: We would not be writing this article if Mitch McGary played for Duke, because Duke would have ruined everything that is great about Mitch McGary.)

From the New York Times:

McGary flopped down on the other bed. "Oh, I love this one," he said.

Brumm left the room and returned about an hour later. "Here they were, lying in bed, just two girlfriends on movie night," Brumm said. "That’s Mitch. He goes: ‘You came back at just the right time, Coach. It’s a really good ending.’ "

We don't know what movie it was, and shame on the Times for not asking, but shoutout to Mitch McGary for keeping it real. Everyone loves chick flicks, but only the true ballers among us are willing to embrace it openly. (For the record: I like to think he and the coaches wife were watching "Sweet Home Alabama" that day. Because seriously, look at these quotes, look at these opening credits. "Sweet Home Alabama" is the greatest.)

5. Does Big Mitch have to give a shoutout to his man Justin Bieber?

Aside from "shoutout to my man Justin Bieber", other insights from this video:

-- His celebrity crush is Selena Gomez

-- His favorite movie is "Step Brothers"

-- His favorite TV show is "Teen Wolf" on MTV

-- If he were to sing karaoke, he would sing Justin Bieber's "You Smile" [/proceeds to sing that song on camera, which is the first time I've ever heard that song.]

To recap: He takes Justin Bieber seriously and loves Selena Gomez and holy shit this section makes us feel old. HE THINKS TEEN WOLF IS A TV SHOW.

6. Will Big Mitch be a lottery pick next year?

Yes, and the funniest tweet of the NCAA Tournament goes to Yahoo!'s Dan Wetzel:

Look, I don't know who out there is texting sportswriters posing as an NBA GM, but just for the record: Mitch McGary would be insane not to leave school this year. He's a lottery pick now, and depending on what happens Monday night, he could go as high as top 5. He's probably the most athletic big man in the country, it's a weak draft, and over the past four days he's been compared to David Lee and Kevin Love. (Because he's white, you see.)

Did you see him against Syracuse? Against the same murderous zone that made potential top-5 pick Cody Zeller look like the most overrated prospect in decades, McGary was the best player on the floor and nearly had a triple double.

Best case he's another Greg Monroe or Kevin Love, worst case he's Tyler Hansbrough. In a weak draft after dominating the NCAA tournament? It's kinda impossible to imagine Big Mitch going any lower than no. 10.

7. Does Big Mitch ride a unicycle?

Yes. This is young Big Mitch on a unicycle. 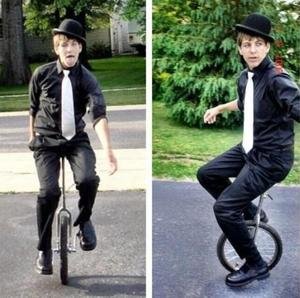 Yahoo! Sports has the full story, including this:

... McGary became intrigued enough to ask his friend to let him give the contraption a try. His older brother eventually bought him a unicycle of his own for his 12th birthday, a gift McGary cherished so much that he spent all his free time for weeks perfecting his riding ability.

"I fell on my face plenty of times," McGary said. "Busted up my knees, elbows and hands, but it was all worth it finally achieving that goal."

Answer (via MLive.com): "McGary's stage name is 'Big Mitch.' He raps at meetings, in locker room, at hotels or even in layup lines before games."

"It's a very, very, very aggressive style of rap," says Glenn Robinson III. "He yells when he raps, just like if he's on the court screaming after a rebound. It's kind of like Rick Ross, a little bit. He tries to make his voice really deep, and yells while he does it."

HE THINK HE BIG MITCH. 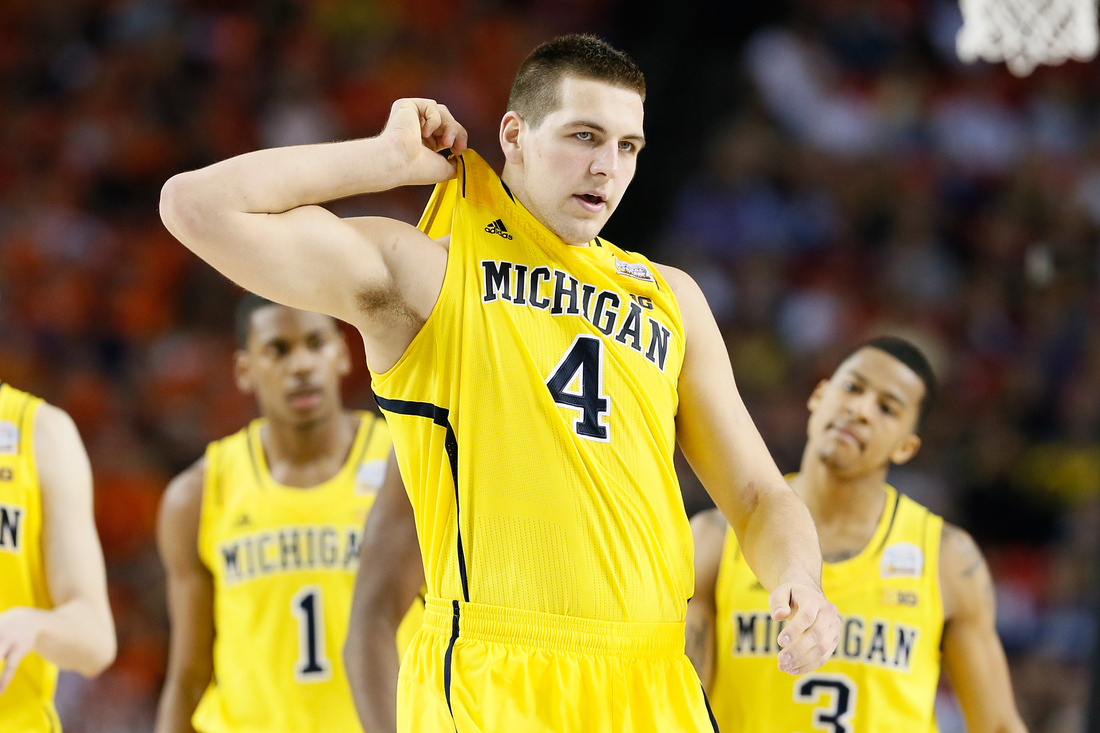 ... If you'd like to read more about Big Mitch's hip-hop career in the Michigan locker room and maybe imagine him re-recording every Rick Ross song ever, the article is here.

Meanwhile, yes: The National Championship game is tonight in Atlanta. And with all due respect to Kevin Ware and Louisville and Rick Pitino's hair, if you can't root for the 6'10 ADHD kid at the center of all this, then I don't want to know you. "I don’t know how exactly to describe it," his old coach told the New York Times. "He relates to everybody. I mean, grandmas love him. Grandpas. Little kids. Blue-collar people. He’s going to take America by storm."

I think we're already there, coach.

All that's left now is to make sure someone has a unicycle in the Georgia Dome Monday night, because the entire world and especially Jim Nantz needs to see Big Mitch riding around on a unicycle and rapping like Rick Ross while he celebrates a Michigan National Championship. DO YOU BELIEVE IN MIRACLES? 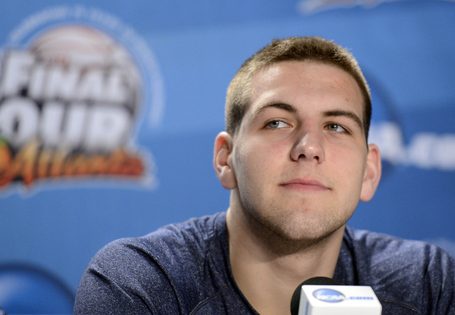