Final Four 2013: Highs and lows from a weekend of great basketball

The Final Four wrapped up an entertaining NCAA Tournament with a weekend of fun basketball. We take a look at some of the highlights and lowlights from Atlanta.

Share All sharing options for: Final Four 2013: Highs and lows from a weekend of great basketball

This past weekend, I was fortunate enough to attend the 2013 Final Four in Atlanta. A friend of mine who lives in Atlanta won four tickets in the NCAA's Final Four lottery, and we joined over 74,000 people taking in some entertaining basketball in the Georgia Dome. I wasn't a fan of any of the four teams in the Final Four, but that gave me a chance to simply root for some quality basketball.

When our friends at Bad Left Hook discuss fights, a common refrain is that matchups make fights. Two entertaining fighters might be great on their own, but it is possible that when you match them up, boredom can unfold. The best example might be a guy like Bernard Hopkins. He has turned into an all-time great fighter, but his defensive strategy can drive fight fans crazy. There is plenty to respect about it, but sometimes it can lead to less-than-stellar fights.

Over the course of Final Four weekend, we got to see this cliche in action. Louisville and Wichita State opened Saturday's national semifinals, and for the first half, you could not have asked for uglier basketball. While the Cardinals were looking to run, the Shockers were looking to slow the game to a manageable pace. Wichita State was able to do just that, and the game suffered because of it.

I can't blame the Shockers for trying to slow it down. After all, their goal is to win, not to entertain me. And they almost pulled off the upset. Unfortunately for them, Louisville was able to pick up the pace and they used a 20-8 run to take control of the game. The second half was entertaining thanks in part to Louisville's comeback from a double-digit deficit, but it was a brutal first half.

Fortunately, we were treated to a fantastic national championship game. Questionable officiating aside, Louisville and Michigan put on a show. Louisville was able to get some running going, while Michigan was fundamentally sound for much of the game, until it mattered most. Both teams climbed ahead to double-digit leads, only to see those leads crumble. Michigan was able to break the Louisville press frequently enough to get into their sets, thus allowing for some measure of flow to the game. Most importantly, you had two teams scratching and clawing for 40 minutes, bringing out the best in each other. Aside from a buzzer beater, we got just about everything we could want from the 2013 National Championship Game.

As great as some of the basketball was, the officiating was abysmal at times. The worst call had to be the quick jump ball against Wichita State late in their loss to Louisville. However, there were plenty of other bad calls as NCAA officiating continues to struggle mightily. The call that drove me craziest was the foul on Trey Burke as he blocked a Peyton Siva dunk late in the second half. The Georgia Dome erupted on the block, as even Louisville had to acknowledge how spectacular it was. Seeing it turned into a foul left us all a little bewildered.

The Dome is where it's at 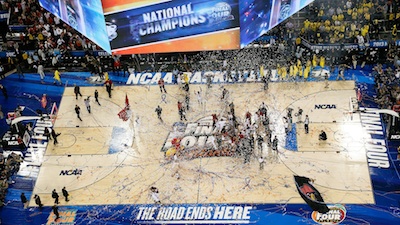 From Spike Albrecht to Chane Behanan to Trey Burke to Luke Hancock, let's look at the heroes that made Louisville-Michigan one of the best NCAA title games we've gotten in years.

The Georgia Dome hosted over 75,000 people on Saturday, and another 74,000 and change on Monday, setting attendance records for the Final Four. The NCAA will host the next three Final Fours in football stadiums as well, with Cowboys Stadium hosting next year, Lucas Oil Field in Indianapolis in 2015 and Reliant Stadium in Houston in 2016. After that, reports indicate the NCAA is looking to move back to smaller arenas for the Final Four.

My friend's tickets were in the second level of the Georgia Dome, in the front row of section 238. I can't provide an opinion on what the view was like from the upper deck, but even still, a 75,000-person crowd brings all sorts of excitement. All four teams traveled extremely well for the title game, and the Georgia Dome was rocking all weekend. Downsizing to 20,000-seat arenas will lock out most of the people who went this weekend, and will reduce the atmosphere. It will be plenty loud, but a smaller arena with all the corporate sponsors in attendance removes the passion team fans bring to tournament games.

Basketball is not quite natural in a football stadium, but for an event as huge as the Final Four, it seems fitting to go big. Let's hope the NCAA reconsiders, and sticks with larger domes for the event.

The enemy of my enemy is my friend

The Georgia Dome was set up so that floor seating behind each basket was reserved for students of each university. For Saturday's semifinals, Louisville and Wichita State students filled the areas for the first game. Late in their game, Michigan and Syracuse fans were brought down to staging sections at the edge of the lower seating bowl. When the first game ended, Louisville and Wichita State students departed through opposite tunnels.

As the Wichita State students left the floor, Michigan fans gave them a loud ovation, and flashed the "shocker" sign. We won't even get into the amusing use of the shocker sign. There was something cool about seeing the defeated fans leaving the seating floor to an ovation from another group of students.

The NCAA has another scam? Color me shocked

I have to give the NCAA quite a bit of credit. While they try to pretend this is all about "student-athletes," they do a great job cashing in on said student-athletes. In order to apply for the Final Four ticket lottery, you can pick your preferred section when you submit your application. In submitting your application, you pay for those seats up front. If you do not win the lottery, you eventually get your money back. If you end up with worse seats than you wanted, you eventually get the difference back. Of course, in the meantime, the NCAA gets to rack up interest on your money. Why do I have a feeling they do business with Tony Montana's bankers?

League commissioners and other sports leaders often find themselves on the receiving end of boos from fans. The leader of a given sports league often ends up with more credit than they deserve when things go well, but also more blame when things go poorly. The best example of this is NHL commissioner Gary Bettman. The man responsible for three work stoppages during his tenure is booed every year when he hands out the Stanley Cup.

Boos rained down upon Mark Emmert any time he was mentioned or appeared on camera.

It's safe to say Emmert will never again be able to avoid boos at an NCAA event. I had a chance to attend the Sweet 16 in Washington, DC, and that round included the Miami Hurricanes. Before and during the games, we were fortunate enough to get a video featuring Emmert and the Director of Homeland Security. Every time Emmert showed up on screen, boos rained down from angry Miami fans. A week later, even with Miami out of the tournament, boos rained down upon Emmert any time he was mentioned or appeared on camera.

Given how grossly incompetent Emmert has been in leadership positions, it's possible he could surpass Gary Bettman as one of the most reviled men in sports. Congratulations, Mark Emmert!

I departed Atlanta on Tuesday morning, joining most of humanity attempting to depart Hartsfield-Jackson Atlanta International Airport. Reports indicated over 150,000 people came to town for Final Four weekend. While only 75,000 attended the games, a handful of concerts and general revelry brought everyone out of the woodwork.

Overall, it was a fantastic weekend in the ATL. While Falcons fans want a new stadium, I thought the Georgia Dome did a great job putting on a great event. Security was efficient in getting people into the games and MARTA ran well for the most part. The experience could always be improved, but all things considered, Atlanta did good.

It's also possible the amazing peach cobbler I had Monday night is doing the talking. If you go to the Georgia Dome and sit in the 200 level, I cannot recommend the peach cobbler enough.

• Kevin Ware cuts down the nets

• GIFs: Trey Burke's awesome block (which was called a foul)