Final Four 2013: Did bad refereeing give Louisville its title?

There were some, let's say, questionable calls made late in games in the Final Four and national championship. But did they really hurt the NCAA Tournament, and how can we make sure it doesn't happen again?

Share All sharing options for: Final Four 2013: Did bad refereeing give Louisville its title?

It's sort of a bummer, at the end of a beautiful season of college basketball and a thrilling tournament. Three big games -- the two national semifinals and the championship game -- all marred by potentially incorrect refereeing mistakes late in the game that seemed to cost teams an opportunity to get back in it.

For Wichita State, it was the phantom jump ball, the Shockers' last chance at life seized away when a play that really didn't look like a tie-up was ruled a tie-up, with the possession arrow giving Louisville the ball:

The ref probably could've held his whistle a bit longer, giving Wichita State the chance to tie after Ron Baker passed the ball away. Instead, there was a jump ball, Louisville got possession, and won.

In Syracuse-Michigan, there was a late charge called on Brandon Triche. An opportunity to tie the game ended up as a turnover when the referee ruled Jordan Morgan beat Triche to a spot just instants before Triche went airborne on a shot attempt.

If it's a block, Triche shoots free throws to tie. It was a charge, so Michigan got the ball and won by shooting free throws.

And in the championship game, there was Trey Burke's block that wasn't, an unbelievably athletic play on a fast break dunk attempt by Peyton Siva that referees ruled a foul.

Yeah, like, that's all ball. All ball. From every angle. With Siva's free throws, Louisville took a five-point lead instead of leading by three with five minutes to go.

There's been a lot of hand-wringing about bad officiating, and deservedly so. It's very unfortunate that some questionable -- possibly incorrect -- calls hurt teams trying to make comebacks. The Burke call is almost definitely wrong. The jump ball was, at best, the right call made too early -- let's say there's a 75 percent chance it was the wrong call. And the charge is a 50-50 call that could've been either a block or a charge.

There's no way to put a positive spin on controversial, maybe wrong calls in close, important games. None.

But I think it's important to take everything here in perspective, and remember two things: these calls most likely didn't change the outcomes of these games, so let's not act like anything delegitimizes Louisville's national title. And in the grand scheme of things, there's not much we can change to make things better.

For starters, let's take a peek at some win expectancy graphs for each game, and how each call changed things. (All graphs are taken from Kenpom.com, which you should buy access to next year.) 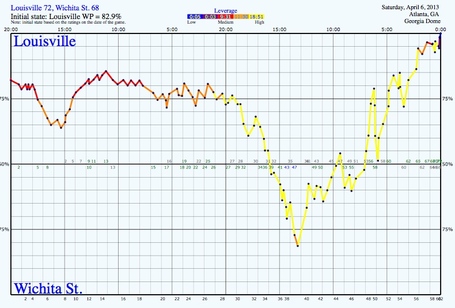 The entire jump ball fiasco takes place in the last few seconds of the game, all in the 90-plus segment of Louisville's win probability. If that play had been a no-call, Wichita State would've been tasked with getting the ball upcourt and hitting a three in about six seconds; then, in overtime, holding off a Louisville team that had been charging for almost the entire second half. Impossible? No. Likely? Far from it. If this call was wrong, it most likely robbed us the chance at seeing a rushed missed three. 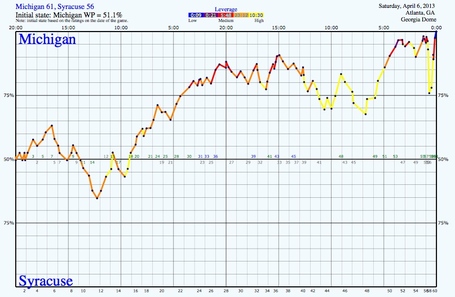 This one sort of makes you cringe. You see that huge spike toward Syracuse's chances, followed up by an equally violent spike back toward Michigan? That's the brief glimmer of Orange hope ended by Triche's charge.

But we're still dealing in the realm of a scenario that wasn't very likely to happen. If that charge was a block, we'd be asking Triche to hit two free throws -- he's a 75 percent shooter, so there's a slightly better than 50 percent chance he'd do that -- and then for Michigan not to connect on its game-winning attempt. If the call goes the other way -- I won't say the right way, since it's really hard to tell -- we're probably still talking about Michigan's win, and if Syracuse completes the comeback, Michigan's griping about a controversial block call.

And then the final: 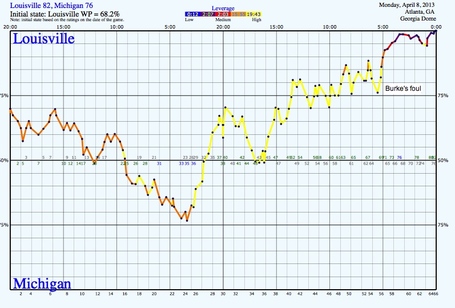 Burke's foul is a part of the stretch right before the five-minute mark-- the last big line on the Y axis -- where Louisville's odds of victory go from a bit over 75 percent to close to 90 percent. There's other stuff in there -- the events are, in order, a Tim Hardaway rebound to get Michigan possession, a Spike Albrecht missed layup and Louisville rebound that gave them the fast break, then Burke's foul and Siva's successful free throws.

If Burke's foul is called a clean block instead of a foul, Michigan gets the ball back down three instead of five. It's a difference, but it's not a game-changing difference. The Wolverines were still at a disadvantage either way, and were only slightly more so because of the awful call.

In summary, all three calls tell similar stories: there's a lot more to the game than just one bad call, and each team was facing under a 25 percent chance of victory at the moment the bad call happened.

Sure, this was a tournament filled with great, improbable comebacks -- Marquette vs. Davidson, Michigan vs. Kansas come to mind -- where, if any one of many calls had gone against the teams that came back to win, we would've been robbed of a moment. There's a small chance we were robbed of another such moment in one of the last three vastly important games, but most likely we weren't. I don't think it would be fair to say any of the three teams that didn't win got screwed out of championships.

But more importantly, when the outrage clears: What are we supposed to do in each case? What changes can we now make -- or what should have been done before -- that could have prevented this?

In the jump ball case, the issue is not just with the quickness of the call, but also with the NCAA's rule that awards the ball to the team with the possession arrow, which unfairly favored Louisville because of a bad double foul call earlier. (Editor's note: Apparently, the double-foul didn't change the possession arrow, although the announcers indicated it did at the time.)

I think that's a really good point. NBA jump balls are awesome. They're a rare, once-in-a-blue moon opportunity for two players to test one pure physical skill against the other, but sometimes one player outwiles the other by properly timing the jump or tapping the ball to an unexpected part of the court on a set play. They sometimes lead to memorable opportunities -- Vince Carter outjumping Yao Ming to win possession.

But in this case, that probably wouldn't have helped Wichita State. It would've had Ron Baker -- 6'2 -- jumping against Luke Hancock, 6'3, with the clock starting on the tip with just six seconds to go. That's not a good scenario.

In the Michigan-Syracuse game, we have a block-charge call, one of the most difficult in the game. There's an awful lot of complaints about this call on both the NBA and college levels, and it seemed heightened in this tournament. Some players seem to play just to draw charges instead of providing quality defense, others flop, some do both. But what's maybe most irritating is that a really pivotal thing -- the difference between a team having two free throws or turning the ball over -- comes down to a spur-of-the-moment judgment call based on which of two things milliseconds apart happened first, and whether or not a foot was in the restricted area -- something often tough to judge on multiple replays.

It's tough to argue the referee in charge of this game made a bad call. Something has to get called, and there's merits to both sides of the argument even after multiple reviews, so the initial judgment sticks. It's also tough to say there's anything we can do to make this ruling easier for officials. The restricted area is a nice rule, since it limits extremely late attempts at drawing charges and makes the refs' job easier, but other than that, I'm not sure how rulesmakers can do. I think we all agree that a defensive player can't blatantly impede the path of an offensive player, but that offensive players shouldn't be able to barrel through previously set defenders. That's sort of a huge amount of the basis of basketball rules. And as long as we agree that's the case, its tough to come up with objectively better or easier rulings than what we have. It'll always come down to split-second, hair's breadth snap decisions, regardless of where we set the parameters for what's legal and what's not. And one team will always feel like it has been robbed, the other will throw its hands up and mention how tough a call it is.

The Burke block -- well, that's just wrong. There are no debates here, and the easy way to fix the scenario is make sure that guy who blew that whistle doesn't ref very many important games.

So what's my point? For starters, the NCAA, like every sports league in the history of mankind, could use some better referees. Here we had three scenarios where guys supposedly at the pinnacle of their profession were asked to make judgment calls in important, close games. In two of the three, they made less-than-satisfactory calls. In the third, its a toss-up, and repeatedly botched block-charge calls elsewhere make us suspicious. That's not good!

But if anyone's out there thinking poor refereeing and bad NCAA rulesmaking cast a dark shadow over this NCAA Tournament -- there might not be, but this is the internet -- it really didn't. In a dream world, we're looking at three teams that still likely weren't going to win with slightly better odds. Instead, we have three results that leave us wondering why in difficult scenarios, difficult and occasionally wrong calls that rule changes likely can't prevent were made. Is that a bummer? Yeah. A fiasco? I don't think so.

I guess in the end we should just be glad we don't have the refs from WrestleMania. Did any of you guys watch that? No idea what game those refs were watching.

• Kevin Ware cuts down the nets

• GIFs: Trey Burke's awesome block (which was called a foul)