The top high school basketball player in the world will spend next season in a Jayhawks jersey.

Share All sharing options for: Andrew Wiggins commits to the Kansas Jayhawks

Andrew Wiggins, the top-rated high school basketball player in the class of 2013, committed to the Kansas Jayhawks on Tuesday amongst a small gathering of friends, family and teammates.

Proving that one can never count Kansas coach Bill Self out of the equation, Wiggins spurned offers from the Kentucky Wildcats, North Carolina Tar Heels and Florida St. Seminoles and hopped on board with the retooling Kansas Jayhawks, who appear to be ready for another big NCAA Tournament run.

The Jayhawks, having won or shared the Big 12 title for nine straight years, had a bit of reloading to do after losing all five starters from the 2012-2013 team to either graduation or the NBA draft. Wiggins will make that pill easier to swallow, serving as the crème de la crème of Self's 2013 recruiting class, which is ranked second in the nation by most media outlets. 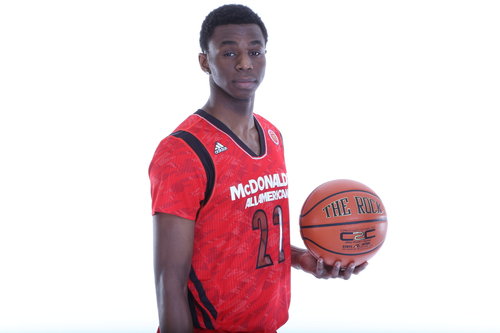 Andrew Wiggins is as talented as any high school basketball player in the last 10 years, but the Canadian-born wing doesn't seem to know what all the fuss is about.

Wiggins led Huntington Prep in Huntington, W.Va. to a 30-3 record while averaging 23.4 points, 11.1 rebounds, 2.5 assists, 2.4 steals and 2.6 blocks per game. He was named both the Naismith Prep Player of the Year and the Gatorade National Boys Basketball Player of the Year in 2013, the first player to receive both awards in the same year since Kevin Love in 2007.

Wiggins will join fellow five-star recruits forward Wayne Selden and center Joel Embiid as immediate impact players on the Jayhawk roster. Wiggins will likely be the centerpiece of Bill Self's offense, playing under a coach that made sure everyone knew the name of Ben McLemore by season's end. McLemore came to Kansas as a four-star recruit in 2011 and, after redshirting for one year, had an outstanding freshman campaign and now figures to be a top five pick in this June's NBA Draft.