Drugs are bad for you, and doubly unhelpful if you're a big-time college athlete. None of which quite explains why athletes like Marshall Henderson need to be drug-tested.

Share All sharing options for: Idiocy, easy virtue, the NCAA and Marshall Henderson

If only because of his continued insistence that it is in fact the case, we might as well consider the possibility that recently suspended Ole Miss chucker-in-chief Marshall Henderson actually is an idiot. Let's concede, true or not, that Henderson's impulse control is nil and his decision-making skills effectively negligible on his best day, and that he drinks and takes drugs in unwise ways. In short: let's concede that he acts like an idiotic parody of himself during every moment that he's awake, and that he's probably even worse in his dreams. (Because he can fly in those.)

This is the same thing as saying that Marshall Henderson is more or less in the middle 80 percent of college-age American humans. But let's further stipulate that Marshall Henderson shouldn't be that way. He should be different than that, better than that. Shave that unfortunate smudgy bro-goatee. Get his diction and grammar up, ease back on the #hashtag #abuse. Eat a healthy diet and get enough sleep, and stop smoking dope and drinking. These are all good ideas, actually, and things we might all do well to work towards ourselves. (At least start with the goatee, if that applies to you. What are you, a member of the 1997 Atlanta Braves bullpen?)

So, now the difficult part: whose problem is all this idiocy and drinking and marijuana-smoking, and what, if anything, should be done about it?

If Marshall Henderson is a volume-physicist or volume-anthropologist on an academic scholarship instead of a volume scorer on an athletic scholarship, the answer would be simple: to the extent that he's not hurting anyone else, the problem, such as it is, is all his. He should do about it what he and his family think is best.

But, of course, Marshall Henderson is a basketball player, which means that the fact that he is and acts like Marshall Henderson is a problem for The Authorities. The NCAA's answer to all this problematic Marshall Henderson-ian behavior is to have him submit to drug testing at random intervals, and to see that he is suspended if/when he tests positive for such opposite-of-performance-enhancing drugs as marijuana or cocaine. Because the NCAA does not wish to be unfair, all of Henderson's peers must do this, too. 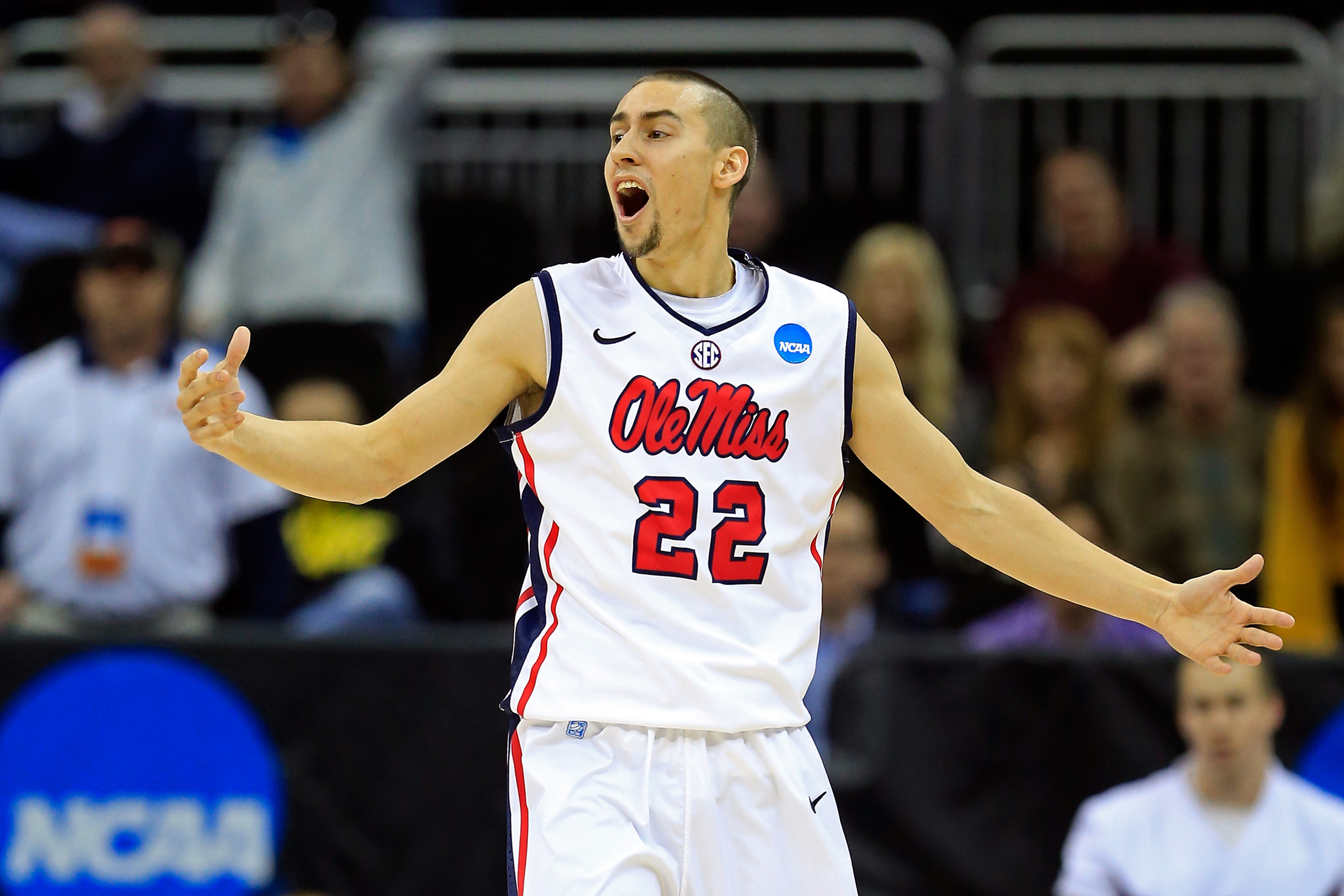 A timeline of events from Marshall Henderson's tumultuous basketball career: From an early arrest to his latest suspension.

And because Marshall Henderson is Marshall Henderson, he just keeps failing these tests. Henderson was arrested and placed on probation -- not the NCAA or Suspended Indefinitely But Really Just For The Game Against Alcorn State kind, but the law-enforcement kind -- back in 2009 for attempting to buy a bunch of pot with counterfeit money, which is pretty much the most Marshall Henderson crime imaginable. Since then, he has been busted for marijuana possession -- and served time in prison for failing to do his court-ordered community service for that offense -- and apparently failed several subsequent drug tests. ESPN's Jeff Goodman reported that Henderson failed multiple tests before this most recent suspension. This is obviously not good, but cf. that earlier bit about Henderson quite probably being an idiot.

But here's the thing: it doesn't really matter how big an idiot Marshall Henderson is or isn't but probably is, when it comes to managing his bad habits. It certainly doesn't matter relative to the bigger question of why the NCAA spends -- and crows about spending on its website -- over $5 million every year to test more than 13,500 urine tests for "street drugs" like marijuana. Marshall Henderson got caught because he likes marijuana too much. The NCAA tests him because... well, why?

There are, it turns out, a pair of recent Supreme Court decisions that give school districts wide latitude to administer drug tests to students. The first of these, Vernonia v. Acton, was decided in 1995, with Antonin Scalia authoring a majority opinion holding that school districts were allowed to drug test high school athletes because of those athletes' unique standing in their community, and because these were high school kids. In 2002, Clarence Thomas wrote the majority opinion in Board of Education v. Earls, which held that an Oklahoma high school district had the right to enforce random drug tests on any students participating in any extracurricular activity, more or less because of Scalia's earlier decision in Vernonia.

Those are high school kids, and Marshall Henderson -- despite doing an awesome imitation of an overcompensating high schooler -- is not. But the principle that justifies suburban high schools getting Latin Club kids to submit to urinalysis is also the one that gives the NCAA and its member institutions the right to make the same demands of their scholarship athletes. In the high school cases, this was justified because the kids had been entrusted to the school system by their parents. The NCAA would argue -- if it ever had to argue this, which it doesn't -- that it's in the same role.

Sketchy judicial precedent for this sort of thing is not the same thing as saying that it makes ethical sense. Some students -- the human resources that collectively comprise a revenue-generating product for their schools and the NCAA -- are subject to a disciplinary regime to which other students are not. The authority responsible for overseeing and administering these hypocrisies is itself a rentier institution whose primary business is enforcement -- of an increasingly ridiculous and metastatic rulebook, of a sentimental and increasingly self-satirizing ideal of amateurism -- and other brand-maintenance work related to its product. The NCAA's unpaid labor force also happens to be that hugely lucrative product.

The result is about as conflicted and confounding as you'd expect.

Anyway, you know all this. You know it, but it's worth mentioning mostly because it brings home the queasy perversity of the incentives behind all this tough-guy punishment. The goal of this discipline is to protect the brand and the product, to perform discipline without significantly impacting the product produced by (often idiotic!) young humans. The result is about as conflicted and confounding as you'd expect.

It is expensive to test for performance-enhancing drugs -- which, besides being illegal, actually do pervert the game the more pervasive they become -- and less expensive to test for recreational ones. "Between 1996 and 2010 -- the era of Barry Bonds, Mark McGwire, Marion Jones and Lance Armstrong -- the failure rate for NCAA steroid tests fell even closer to zero from an already low rate of less than 1 percent," the AP reported in 2012. What's left is what's left. And so a few thousand athletes pee in cups, and the more Marshall Henderson-ian among them test positive for "street drugs" and handshakes all around.

The NCAA has clear and harsh rules for positive tests involving performance-enhancing drugs; the penalties for the drugs that Marshall Henderson (and most college-age humans) favor are less specific. That Henderson keeps getting caught for these drugs is, of course, on him. He may go to rehab, which is good news if he's an addict who wants help and wearyingly glib crisis-management otherwise. That the NCAA does not have a protocol for athletes dealing with addiction -- and that, in fact, the de facto protocol generally winds up being schools revoking scholarships and cutting ties with the troubled kids they kinda-sorta employed -- is on the NCAA.

Which is more embarrassing -- Henderson's apparent inability to stop making the same mistake or the NCAA's multiply cynical approach to those mistakes -- is finally a matter of taste.

Professional athletes, it's worth mentioning, submit to the sort of tests that Henderson continually fails on a regular basis. They mostly pass them and sometimes fail them. But they know when they take these tests and why they're doing it. They were collectively bargained as part of a bigger deal, an appeals process was negotiated and funded, and there are other benefits that balance out the imposition on privacy and everyday non-urinary business of periodically being told to urinate into a cup.

You can argue that a person's habits are fundamentally that person's business as long as they're not hurting anyone else -- you've probably guessed by now that I'd agree with you in that -- but the sort of testing that professionals undergo nevertheless reflects something rational, a sort of trade between some people who work and the people who pay them.

That's not what's happening here. The NCAA extracts a great deal of money from Marshall Henderson's on-court labor and offers Henderson nothing but a heavily contingent scholarship and the promise/threat of future high-handed discipline. His scholarship and health care aren't guaranteed. If he is an addict (and some sportswriters seem to think he is) the commitment to helping him with that on the part of those so dedicated to testing him will go exactly as far as Ole Miss coach Andy Kennedy wants it to go. The NCAA's job is finding and publicly punishing problems, not solving them.

There is the sense that the NCAA's disciplinary regime is mostly corny-cruel, overdetermined theater -- a performance that reminds you how important the NCAA is, for the benefit of a notional fan base of mean dads in constant war against the urge to run through the mall spanking other people's kids. There is the sense, too, that the commitment of the coaches and athletic departments to the athletes they don't pay extends as far and as long as those athletes deliver headache-free surplus value, and no further. This is tough-mindedness for weak-minded people, built on the assumption that a series of escalating mean-mugged "no's" is somehow more adult or serious than working towards a fair solution to a difficult problem with actual human costs.

All of which is cynical and self-justifying and familiar and actually pretty distasteful. But it's also finally fine when it's part of a business transaction between labor and management, provided both sides have some say in things.

This is not that kind of transaction. Only one side of the equation has any power, and that side has very little shame or compunction about leveraging it. Judge Marshall Henderson by his deeds and you see that he's an idiot, but he's also a kid whose floridly berserk on-court performances make money for already-rich adults who refuse not just to share what he earns with him in any meaningful way, and additionally ask him to give up some rights in the bargain, too.

So, yeah: think of the NCAA as a marching band. Think of Marshall Henderson shifting hyperactively in an uncomfortable seat as the band plays the same sad-trombone note over and over, and then demands that he applaud.