Creighton, Ethan Wragge forgot how to miss 3s against Villanova

The Bluejays nailed their first nine attempts from beyond the arc. Queue up the "NBA Jam" announcers.

Share All sharing options for: Creighton, Ethan Wragge forgot how to miss 3s against Villanova

Creighton's matchup against Villanova was our pick for the Onions! Game of the Night -- Doug McDermott going up against the No. 4 team in the country on the road, with Gus Johnson and Bill Raftery on the call? Yeah, we'll watch. But from the moment the ball was tipped, Creighton began absolutely drilling threes.

No, really, drilling them: 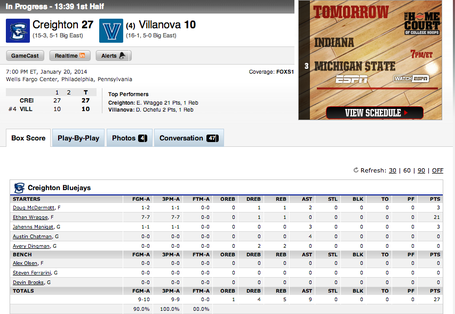 They'd miss their next attempt, but McDermott would pour one in a few seconds later to make all 30 of Creighton's first 30 points off of three-pointers.

Leading the way was Wragge, who believes the floor inside the arc is made of lava -- 134 of his 140 attempts from the field this year have been threes. When he eventually missed on his eighth attempt, a cheer went up from the Nova faithful. But the damage had been done. 21 points! In under six minutes!

Ethan Wragge at the half: 24 points, 0 dribbles

Dude's allergic to anything that isn't a three-pointer. It's a serious medical condition.

Creighton's 13 three-pointers tonight are a Wells Fargo Center record by a Villanova opponent. Still 26 minutes to build on it. CU up 47-21.

Wragge has eight threes in the first half, leaving him about halfway to the NCAA record of 15.

Or maybe it's just something in the water in Philly: