We have one rule whose key design is to make half of the people watching the game arbitrarily angry. That seems like a bad rule! Also, predicting the Super Bowl based on Denver vs. Seattle and Broncos vs. Seahawks.

I was worried what to columnize about -- it was going to be about the mythos of Aaron Craft, but, I mean, why pile on? -- when a game I was watching reminded me of MY LEAST FAVORITE THING IN COLLEGE BASKETBALL.

Oregon was playing UCLA, game tied, UCLA ball with a few seconds between the two clocks. Kyle Anderson, one of the most interesting players in hoops right now, goes for the pull-up jumper, and...clangs it. Forward Richard Amardi of the Ducks gets there first, but can only tap the ball into the air. When it comes down, UCLA's Jordan Adams is in the area too,and the pair get tangled up.

This is what I instinctively call a jump ball, but in college hoops is technically a "held ball." What should have happened is some contest between Adams and Amardi would have decided who got the ball. Perhaps this contest should be the jump ball we're used to from NBA games. Perhaps they should wheel out one of those carnival machines where you hit a thing with a mallet, and see who can get the other thing to go highest. Perhaps they should have to answer a quickfire trivia question, or play each other in flip cup, or have a dance-off. I like watching competitions, which is why I like watching sports.

What actually happened is UCLA got the ball, because the possession arrow was pointing their way. You see, UCLA had won the tipoff 39 minutes and 52 seconds earlier. If Oregon's players had known the game would have come down to which team had won the opening tip, they would likely have gotten hype and battled for it instead of treating it like a formality to start the game, which it is. Since there were no jump balls in the first half, Oregon got the ball in the second half. Since there were no jump balls for 19 minutes and 52 seconds in the second half, UCLA got the crucial possession.

Two years after Kentucky first disproved the "can't win with freshmen" crowd, Kansas is attempting to drive a stake into the notion's chest.

That jump ball turned the shot clock off, and ensured that Oregon wouldn't see it with any meaningful amount of time left. Travis Wear would find the ball randomly in his hands and he'd slot the ball home for the game-winner.

The possession arrow is my least favorite thing in college hoops, for two reasons:

They're like mini-games in the middle of a much more complex videogame, where players are asked to act in a manner they never have for a brief, tremendously important moment.

Most of the time, they're random: a battle of wits and leaping between two players while everybody else fights for the ball. Which is really want you want out of a held ball, anyway.

The only problem with jump balls is the occasional situation where one team clearly has the taller/more athletic player, but in my eyes these are the best jump balls. They bring out the moments like Vince Carter outleaping Yao, or the discovery that Manu Ginobili has sly ups. And even if the taller guy wins the tap, that doesn't mean his team will end up with the ball: it just means he won the right to tap it in the right direction, a direction the other team has probably figured out beforehand.

2. Giving the ball to the team with the possession arrow is stupid

Splitting things evenly is only fair if things deserve to be split evenly. I would know: I slacked as hard as I could on every group project I ever participated in my entire scholastic career, and still got the same grade as my partners. Random, even division rewards one party for just being there.

Each team gets the ball the same amount of times in a college hoops game, give or take one possession -- an advantage teams can earn by holding for the last shot or going 2-for-1. The possession arrow does not alter this fact. It merely jostles the times those possessions start and end. It sometimes takes the ball away from the deserving party without giving them a chance to plead their case. Considering the low odds of there being additional jump balls in a game, it often makes tremendous individual effort to reach a ball a moot point.

In theory, the possession arrow is "fair." But it seems strange to randomly have a game of chance inserted into a game of skill. The possession arrow's main upshot is that one team will be arbitrarily angry every time it comes into play. Which makes it seem pretty unfair.

How much basketball has Rodger watched

Shoddily filmed buzzer-beater of the week

We've got a soft spot in our heart for William and Mary because they've never made the NCAA Tournament, much like our Northwestern. Also, because we've always felt it must be a bit of a drag trying to win games 2-on-5, and with both players being long deceased British royalty, one of them female.

But Thornton really carried the banner against Drexel with 26 points and the buzzer-beater here. Very shoddily filmed, but great camera angle to capture Thornton's celebration. (Hat-tip to College Basketball Talk. We considered going with Duke Mondy's buzzer-beater for Oakland, but that was too well-filmed.)

Have you heard about football? WHAT?!?!?! YOU'VE NEVER HEARD OF FOOT

okay, how do i explain this: remember when Kent State made the 2002 Sweet 16? Well, that guy on that team, Antonio Gates? Yeah, so he's tall and good at jumping so that's also important in another sport, too. That sport is called football, and it's immensely popular in the United States, even at the collegiate level. The most important game is on Sunday.

The game will indubitably be close, so there are two ways to measure who will win:

1. Determining whether the Denver Pioneers or Seattle Redhawks is the better college basketball program

WHICH TEAM IS BETTER THIS YEAR

Denver is Kenpom 113 and has a legit shot at winning the Summit. Seattle is Kenpom 221 and is currently 1-5 in the lowly WAC. POINT, DENVER 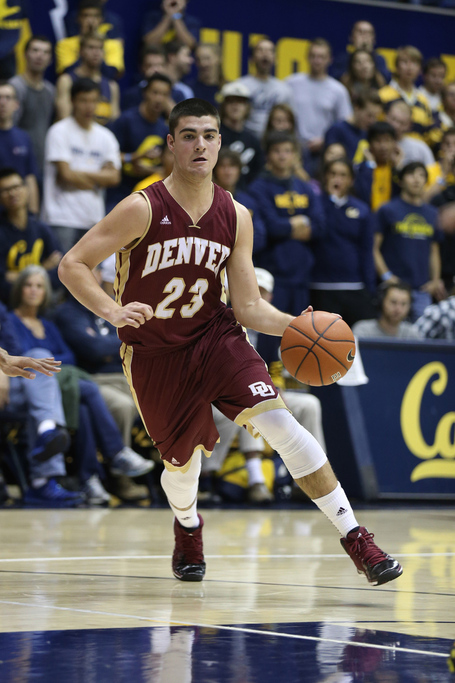 WHICH TEAM HAS THE BETTER HISTORY

Denver's never been to the NCAA Tournament, while Seattle is where Elgin Baylor played, leading them to the 1958 national title game. POINT, SEATTLE

WHICH TEAM HAS THE BEST NAMED PLAYER

The best name on Denver is probably Drick Bernstine, whereas Seattle has Manroop Clair, Shore Adenaken, Jack Crook, Jarell Flora -- his arch-nemesis is Jarell Fauna -- and DeShaun Sunderhaus, whose name isn't notable in any way besides the fact that DeShaun and Sunderhaus are acronyms. SEATTLE, IN A LANDSLIDE 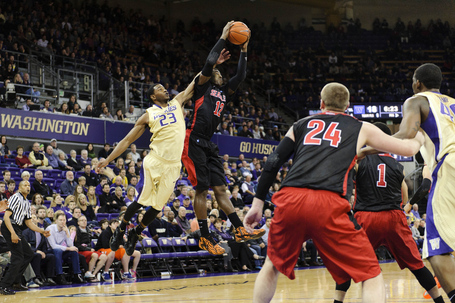 Umm, we should also take a moment to talk about the hideous back of Seattle's pants.

WHICH TEAM'S VARIOUS THINGS ARE COOLER

I'm not even going to discuss Denver, because Seattle is coached by Cameron Dollar -- who replaced Tyus Edney in the national title game in 1995 -- and plays in the Sonics' former building, KeyArena. KILLIN' IT. 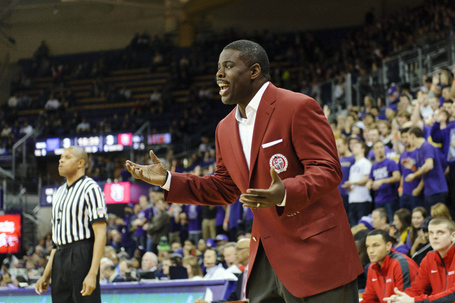 KILLIN' IT. Basically, we should deduct a point for Seattle's hideous pants and give them a point for Dollar's jacket.

Seattle. This is a moment to shoutout very brief draft prospect Charles Garcia, who I watched once and fell in love with.

WHICH TEAM IS BETTER THIS YEAR 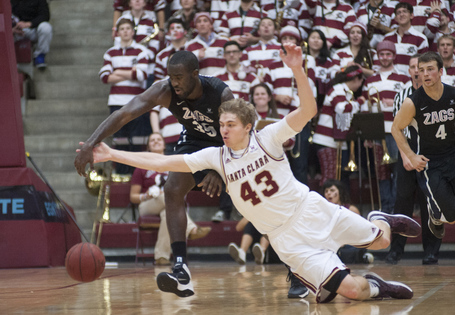 WHICH TEAM HAS THE BETTER HISTORY

You could have just guessed "the one Steve Nash played for." Santa Clara made it to the 1952 Final Four and five Elites Eights, plus got a win over Maryland when Nash was in school. They're also the irrelevant champions of the world, with a CBI (2013) and CIT (2011) title to their name, meaning they've ended two of the last three years with a win. And we're not even mentioning Kurt Rambis. Meanwhile, Wagner's only NCAA trip was in 2003, when they lost to Pittsburgh in the first round. POINT, BRONCOS

WHICH TEAM HAS THE BEST NAMED PLAYER

WHICH TEAM'S VARIOUS THINGS ARE COOLER 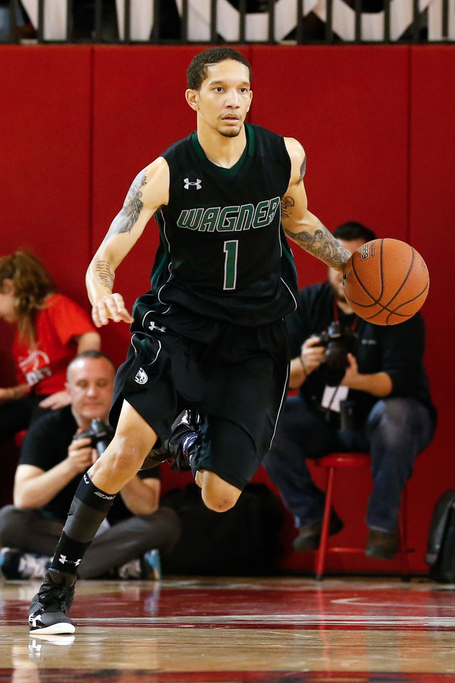 Basically, this comes down to a matchup of Santa Clara's Kerry Keating and Wagner's Bashir Mason, the youngest coach in college hoops at 29. I'm going with Bashir. POINT, SEAHAWKS

So there you have it: the only two, extremely scientific ways of determining who will win the Super Bowl both point to the Seattle Seahawks. Bummer for ex-Louisville point guard Peyton Siva, who I hear has found success as the Broncos' quarterback.

GAMES OF THE DAYS OF THE WEEK

My rule has typically been to pick an earlier game so you -- who presumably watch every game I advise you to watch, right? RIGHT?!?!?!?!?! -- can get on with your lives, but this is the good one tonight. It's a MAAC game between two Kenpom top 100 teams: last week we detailed how preposterously efficient Iona's offense is -- they still shoot 41.4 percent from deep, never turn the ball over, and also have the 21st fastest tempo in the nation. Manhattan's less fun claim to fame is that they're the best team at getting fouled in the country, thanks to NEW YORK POINT GUARD WOOOOO Michael Alvarado, who has scored exactly half of his 314 points at the free-throw line. Rhamel Brown has the No. 2 block rate in the nation. This is kinda fun, actually!

I DON'T NEED TO TELL YOU!

My prediction: Duke needs offense besides Jabari against a zone, and they don't have it, not in Syracuse at least.

Syracuse, Duke, Pittsburgh, and Virginia are the top four teams in the ACC. I had thought Pitt was better than Duke, but then Duke whooped Pitt at Pitt, so I guess I think the order is the one I listed up there. This should be pretty slow and ugly, but get to know Lamar Patterson and get to know Virginia's defense. Also, get the hell away from basketball before football starts -- no game starts later than 2:30, because we're not stupid.

Everything on earth has died, except for the point guards. DeAndre Kane and Marcus Smart recede to the depths of the ocean, where they fill the roles formerly inhabited by giant squids and blue whales. I put up popcorn and watch them grapple.

I BELIEVE IN YOU, BAYLOR! I THINK YOU'RE ALL TALENTED AND SHOULDN'T LOSE EVERY GAME! HIRE ME TO COACH YOU INSTEAD OF SCOTT DREW! (Selected over Ohio State-Iowa because oh no why is Ohio State on fire)

The Cyclones' chances to lose between now and the NCAA Tournament are as follows:

--This game, on the road at Indiana State, the second best team in the MVC

--The game after it at Northern Iowa

--Somebody getting lucky at the conference tourney.

Jake Odum's a heckuva point guard for the Sycamores, and maybe he does something to stop a mid-major monster.

The two top teams in the OVC! These two guys have a tendency for outperforming their conferences a bit, and although that's not the case this year, the Bruins and Racers are still clearly the two best teams in their leagues. (Also considered: UConn vs. Cincinnati, and you should watch a very good Bearcats team, but I wanted to spread the love and you'll be able to watch Shabazz Napier running things in late game situations, well, every single time UConn takes the floor.)

• Defense and ball control the keys for Arizona

• What the addition of Chris Walker means for Florida