Tubby Smith, Texas Tech, and the power of ball movement

How does an offense go from terrible to good in a single season with nearly the same roster?

Share All sharing options for: Tubby Smith, Texas Tech, and the power of ball movement

Lubbock, Texas is the Bermuda Triangle of the Big 12 -- a place where strange things just happen. Last Saturday was no exception. With six seconds left in a game that he was about to lose, Oklahoma State star Marcus Smart exchanged words with a fan, shoving him, before being pulled away by teammates.

It is unfortunate that this happened. Not just for Smart, but also for the Red Raiders. Smart's little shove buried the real story of the game, which was that trips to west Texas in the Big 12 can no longer be treated as easy wins. Actual competitive basketball is once again being played in Lubbock.

This season, the Big 12 is again among the best conferences in college hoops, even better than it was a season ago. Much of this improvement has come thanks to teams at the middle and bottom of the conference. No team in the conference has improved more dramatically than Texas Tech.

Before we go any further, let's address something; Texas Tech is still likely to finish in the bottom half of the Big 12 standings this season. By the standards of major conference basketball, Tech is still among the have-nots -- the sort of team that is typically ignored nationally. However, that doesn't mean that the Red Raiders aren't a substantially improved team. As of Sunday, Texas Tech was ranked 85th in the kenpom.com rankings. Compared with their 233 ranking last season, the Raiders have a year-over-year improvement larger than any team in the Big 12.

What is remarkable about this improvement is that the Red Raiders do not have a bunch of new players. Tech's roster hasn't changed much this year from last year. What Tech does have is a new coach, Tubby Smith. Smith is winning games with a bunch of guys who went 3-15 in the Big 12 a season ago.

Tech's transformation has been the most dramatic on the offensive end. Last season, the Red Raiders had a hard time scoring, averaging 0.89 points per possession in Big 12 games, the second-lowest rate in the conference. After Saturday's win over Oklahoma State, Smith's squad has scored 1.10 points per trip, the third highest rate in the conference.

The Red Raiders aren't scoring a lot of points per game, mostly because of their slow pace play. Texas Tech games feature the fewest possessions of any team in the Big 12. Tech's victory over Oklahoma State is an illustrative example. Texas Tech scored only 65 points in a 55 possession game, averaging 1.18 points per possession against a good Oklahoma State D. That is efficient offense.

Texas Tech's offensive transformation is coming from doing the things that Tubby Smith's teams always do. The first thing that pops out is that the Raiders go to the offensive glass, rebounding 38 percent of their own misses, which is the 20th highest rate in D-I. This has long been a characteristic of Smith's teams; recall that the Minnesota Gophers last season led Division I in offensive rebounding percentage. But this isn't all that has changed.

Texas Tech's improvement at the rim

This improvement at the rim does not come from extra shots in transition, where shooting percentages on attempts at the rim are typically higher. The Raiders actually have taken fewer shots in transition this season than they did a year ago; Tubby Smith's Texas Tech offense is one of the most methodical in the nation. Instead, the tables below show that Smith's squad is just converting more of its attempts at the rim than the team of his predecessor did. For example, in non-transition situations, a season ago the Raiders converted 58 percent of their layups and dunks, while this season they are making just under 65 percent of these same shots.

Texas Tech transition and half court in 2013

Texas Tech transition and half court in 2014

Smith's three big guys -- Jordan Tolbert, Jaye Crockett, and Dejan Kravic -- last season combined to shoot a robust 66 percent on non-transition shots at the rim last year. This year they are at an outstanding 70 percent on these same shots. Most of this improvement is from Kravic, who has improved his non-transition shooting percentage at the rim from 56 percent to 66 percent.

Just watching Texas Tech play, the transformation of the offense is easy to see. The first thing that sticks out the most is that there is much more ball movement. The numbers show this as well. Tech's offensive load is more broadly distributed, which is easy to see when we study individual player possession usage rates and assist rates.

Possession usage rate measures what percentage of possessions end with the ball in a particular player's hands when he is on the floor. Possessions end with either a shot or a turnover, so usage rate is essentially the percentage of a team's shots and turnovers that a player takes while on the floor. Individual player assist rate measures what percentage of teammate's made baskets come from a players assists when he is in the game. Players with both high possession usage rates and assist rates tend to dominate the ball. These numbers are conveniently tabulated at Kenpom.com.

The plot below illustrates the change in the Tech offense from last season to this season. The vertical axis corresponds to assist rate, while the horizontal axis shows the possession usage rate. Each player who has been on the floor more than 50 percent of the time is plotted. Last season's results are indicated with blue squares. This season's results are plotted as red diamonds. 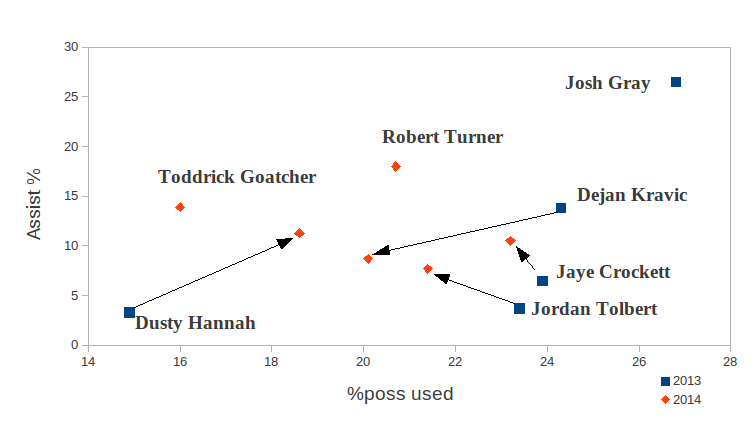 Last season, Freshman Josh Gray dominated the ball on offense, despite the fact that he struggled both with turnovers and his shot. After the season was over, Gray transferred to Odessa Junior College. This season, his replacement Robert Turner dominates the ball much less. Dejan Kravic spends less time with the ball this season than he did a year ago. Jaye Crockett and Jordan Tolbert find themselves with the ball at the end of possessions a little less frequently, but are far more likely to record an assist. Dusty Hannah was used primarily as a catch-and-shoot player last year, rarely assisting, whereas this year his assist rate is above 10 percent and he is a much more active participant in the offense overall.

The plot above makes clear the change in the Tech offense. No one player dominates the ball to the extent that Gray did a season ago, and no player spends most of his time basically frozen out of the action, in the manner that Hannah was. The individual points in the plot above from this season are are bunched together more closely, indicating that the workload in the offense is being shared more evenly across the various players on the court.

Often times 6-7 forward Jaye Crockett is finding himself to be a key trigger man in Tubby Smith's offense. When Tech scores at the rim this year, it is far more likely that the player making the pass to set up the easy score is Crockett than was the case a year ago. Crockett has 30 assists so far this season, 23 of which have resulted in layups or dunks. Crockett has recorded a little more than 15 percent of his team's assists at the rim so far this season, which is the second highest total on his team. A year ago, his rate was about half of this, at seven percent. This is a rather new role for Crockett, but it is one he is doing well with.

Some of these assists come because Crockett aggressively looks to find his teammates cutting to the basket, as is shown in the series of images below. This sequence was taken from a crucial point in a game against West Virginia earlier this year; it was a game that the Raiders lost in overtime. The action is set in the first photo, where the ball is near the upper right corner of the image. Jordan Tolbert is preparing to set a ball screen, while Crockett is lurking. 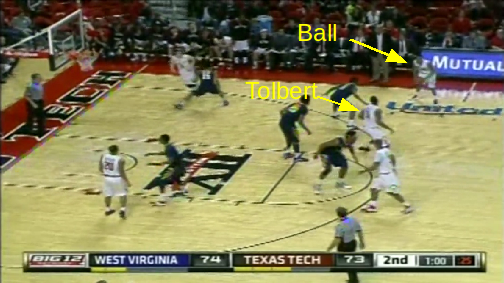 The moment after the ball screen is set, we reach the point in the image below. The dribbler comes off the screen, while Tolbert starts to roll to the basket. Tolbert's defender is playing back, and is ready to help pick up the dribbler. 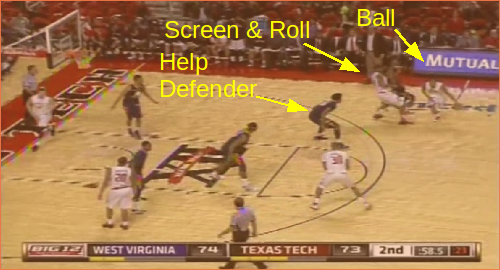 Advancing just a few frames further, we reach the next image. Tolbert is starting to cut to the basket, and is open, with his defender helping to limit penetration. But the passing angle to get the ball to Tolbert is not good. Instead of the ball handler making a single (difficult) pass to Tolbert, he will first pass to Crockett. Crockett will then quickly lob the ball to Tolbert, who will end up with a layup. Whenever you see Tech run a screen and roll, this is one of the options they are looking for. 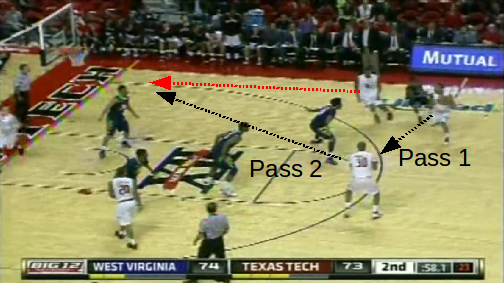 It is easy to overlook the improvement of Texas Tech. After all, this is a team with a 12-11 record that is likely to finish in the bottom half of its conference.

But the improvement is still real. The Red Raider offense is substantially better, and as a result the team is vastly improved. Texas Tech is getting more offensive rebounds, moving the ball better, and converting a higher percentage of their chances at the rim.

• Around the Big 12: The pack strikes back

• Jabari Parker, Jahlil Okafor not thinking about next year