Can we finally talk about how poorly Syracuse has been playing?

Boston College pulled off the upset of the year by knocking off No. 1 Syracuse Wednesday night, but the Orange have had this coming for almost a month now.

Share All sharing options for: Can we finally talk about how poorly Syracuse has been playing?

It won't take long on Thursday for the college basketball world's focus to shift from the end of Syracuse's quest for perfection to whether or not the Orange losing to Boston College will actually be a good thing for the team in the long-term. There will also be plenty of talk surrounding the notion of whether or not a "good loss" actually exists, as well as the idea that Syracuse lost to the Eagles because they were too focused on Saturday's rematch with No. 5 Duke.

Speculation and debate are fun, but in this instance both exercises will be a distraction from the simplest and most important takeaway from the end of Syracuse's run at perfection: the No. 1 team in college basketball doesn't look like it can win the national championship, and it hasn't for three weeks.

Troy Nunes is an Absolute Magician

For more on the Orange, visit our Syracuse team blog

Even if the Orange spent every available second from Sunday-Wednesday scouting Duke and popping anxiety pills to deal with the pressure of being undefeated, they should have had no trouble with Boston College.

Entering the Carrier Dome with a 6-19 overall mark, BC now owns the record for having the worst post-New Year's winning percentage of any team to knock off the nation's No. 1 squad. Even if the Eagles win out this season, their 19 losses will be the most ever by a team which defeated the AP No. 1. The last time a team with a losing record upset the nation's top dog on the road? 1955.

Ken Pomeroy, college basketball's mad genius, calculated Syracuse's chances of moving past BC and on to 26-0 to be 96 percent. For comparison's sake, the nation's other undefeated team, Wichita State, was given a 92 percent chance of winning its Wednesday night game against 9-17 Loyola (IL).

Regardless of the extenuating circumstances, legitimate championship contenders don't lose to teams like Boston College at this point in the season...especially not at home. But now that the "all they do is find ways to win" defense is out the window, we can finally talk about the fact that Syracuse hasn't looked like a legitimate championship contender since the calendar flipped to February.

We can finally talk about the fact that Syracuse hasn't looked like a legitimate championship contender since the calendar flipped to February.

Since defeating Duke in that 91-89 overtime thriller on Feb. 1, Syracuse has played five unranked teams and outscored them by a combined 19 points, a total which includes a 13-point win (57-44) over Clemson. They've averaged 58.2 points in those five games, and failed to score any more than 61. If Tyler Ennis 35-foot game-winner against Pitt doesn't go down and if what should have been a basket and-one for NC State's T.J. Waren is called correctly, the Orange are heading into Cameron Indoor on Saturday riding a three game losing streak.

Perhaps more disconcerting for Syracuse -- a team which had outscored opponents 17-0 in overtime or the final minute of tied games -- than their overall performance on Wednesday was the fact that they had ample opportunity to extend the "just find ways to win" tagline into the weekend, but their stars couldn't find a way to take advantage.

With a chance to win the game in the final minute of regulation, Jim Boeheim turned to Ennis, who has suddenly developed a reputation for being the most clutch player in college basketball despite being a freshman. Ennis misfired on a jumper, but then made a very Tyler Ennis play by securing the offensive rebound. Veteran Rakeem Christmas then took a shot at playing hero, but missed in close with three seconds left. After Boston College grabbed the rebound, All-American candidate C.J. Fair came extremely close to picking up one of the worst fouls in college basketball history. 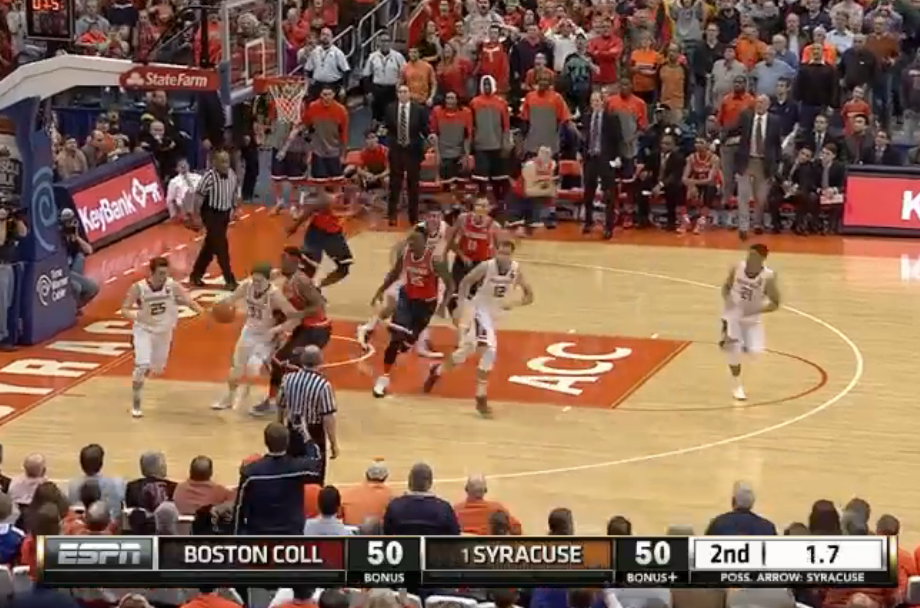 Despite not exactly riding a wave of great momentum into the overtime period, Syracuse still had the benefit of not having any of its top scorers in foul trouble, a fact which led most objective observers to believe they would once again escape with a victory.

Boston College had 10 possessions in overtime and made three field goals. Not an atrocious performance by any means, but certainly not one incapable of being outdone by the No. 1 team in the country.

Instead, here's a breakdown of what Syracuse did with its perfect season on the line:

Possession 2: Fair attempts to exploit a mismatch against BC guard Joe Rahon, a player on whom he owns a six inch height advantage. But instead of doing what he did the possession before and getting himself a clean look with his body square to the basket, Fair attempts a running lay-up from the left side. It misses and zero teammates are in position to compete for the offensive rebound.

Possession 3: Syracuse looks noticeably jumpy after another Boston College three, but a mysterious foul call in the lane bails them out and sends Christmas to the free-throw line where he drills a pair.

Possession 4: The Orange have a terrific defensive possession which culminates with a Fair steal near midcourt, but his lay-up attempt is swatted away by Patrick Heckmann.

Possession 5: BC's Lonnie Jackson takes a criminally quick three-pointer that leads to a Syracuse breakout and an uncontested lay-up for Ennis. Game is tied, Orange have the momentum, this is supposed to be where the proverbial deal is sealed.

Possession 6: Fair again attempts to exploit his height advantage but winds up forcing a shot over two Eagle defenders that misses. Ennis comes up with the big rebound, misses an uncontested floater in the lane, but gets the rebound again and winds up at the free-throw line where he can only manage to make one of two.

Possession 7: BC scores on a backdoor lay-up to take a 58-57 lead. Jim Boeheim calls a timeout where he presumably decides to get the ball to his senior captain. Instead, Ennis -- for the second time in the game -- does what he hasn't done all season and makes a freshman mistake by throwing the ball away. The officials say the errant pass was touched by an Eagle, and although the replays don't appear to confirm that, the ball stays with 'Cuse. 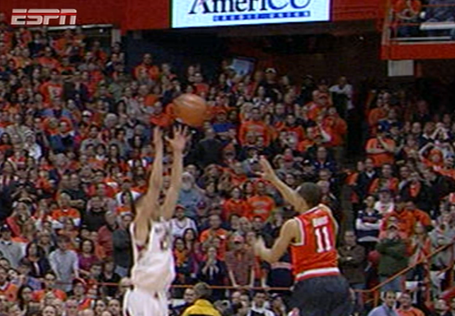 Fair winds up taking another highly contested shot in the lane that finds all iron, and the ball goes out of bounds off the Orange.

Possession 8: Up three, Boston College doesn't appear particularly interested in doing anything to keep Syracuse from scoring. Ennis passes up multiple opportunities to shoot an open three for the tie in favor of shooting an open shot around the rim. He misses, but Christmas is right there for an equally uncontested tip-in. Again, this Boston College team isn't exactly the 1983-84 Georgetown Hoyas.

The formerly undefeated Orange owned the No. 1 overall seed in Chris Dobbertean's Tuesday bracket projection, even after a pair of uncomfortably close wins last week. That will probably change Friday.

Possession 9: Outside assassin Trevor Cooney gets a decent look for a game-tying three in the closing seconds, but comes up woefully short. Ennis briefly has control of the offensive rebound, but loses it when he puts the ball on the court. BC chucks the ball into the air and the upset is complete.

For the game, Fair, Ennis and Cooney combined to play more than 128 minutes and miss 30 shots, and all three had key misfires in the game's final five minutes. That's not going to get it done, even in a game where the opponent hasn't beaten anyone in the ACC not named Virginia Tech.

Syracuse has the pieces to beat any team in the country, and I still think this is a more complete squad than the one which ended last season in the national semifinals. That said, their play since beating Duke inside the Carrier Dome nearly three weeks ago has been nowhere near championship caliber, and it's been pretty obvious to see. What happened Wednesday night simply gave us all the green light to go ahead and discuss it.