Oklahoma State guard Marcus Smart will sit out after shoving a fan during a game against Texas Tech.

Oklahoma State Cowboys guard Marcus Smart has been suspended three games for shoving a fan during his team's 65-61 loss to the Texas Tech Red Raiders, according to an announcement by his university during a Sunday press conference.

"This is not how I condone myself, this is not how the program is ran, this is not how I was raised," Smart said during a press conference that was broadcasted online. "I just let my emotions get the best of me. I feel like I let my teammates down. These guys mean a lot to me, and not being able to be out there with them, it hits me in my heart." 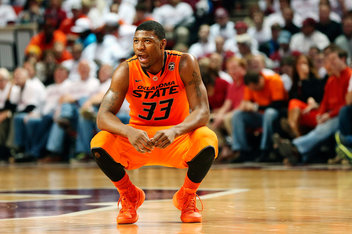 Mark Rutherford on Marcus Smart, and the conversation we should be having about fan participation.

"I take the responsibility and the consequences that come with it."

Smart will miss the Cowboys' upcoming stretch of Big 12 play against No. 15 Texas, No. 21 Oklahoma and an unranked but dangerous Baylor squad. He will be able to return Feb. 22 in Stillwater against the same Texas Tech team he earned his suspension against.

The suspension adds to an already-thin depth chart for coach Travis Ford. OSU will lean more heavily on fellow guard Markel Brown, a senior averaging 16.6 points, 2.6 assists and 5.5 rebounds per game. After that, it'll come down to Ford giving 5'11 guard Phil Forte III the rest of the minutes left by Smart's absence.

It doesn't help in this situation that Oklahoma State dismissed freshman guard Stevie Clark from the team less than a week ago after continued off-the-court problems.

With seconds left to play in Lubbock, Texas, on Saturday, Smart's momentum took him into the crowd after he attempted to chase down and contest a Texas Tech shot. But while getting up, Smart reacted to a fan's comments by shoving him before walking back onto the court.

Smart claimed the fan, Jeff Orr, used a racial slur to incite his shove. Orr denied using a slur in a statement, but apologized for calling Smart a "piece of crap."

Following the Saturday game, Big 12 commissioner Bob Bowlsby reviewed the incident and laid the penalty on the sophomore guard, who returned to school after his freshman season despite being considered a potential top-5 pick in 2013.

"Last night was not one of his finest moments," Ford said of his team's guard, "but Marcus Smart has had many great moments as a person and a player. I know Marcus Smart's heart. I know how he's hurting, I know how regretful he is right now, and those are the things that make me love Marcus Smart."

While the shoving incident may or may not change NBA front office opinions of Smart's draft stock, it certainly indicates his struggles on the court of late.

Smart is averaging 17.5 points, 4.3 assists and 5.7 rebounds per game in 2013-14. His decision to return initially looked like a good one -- his three-point shot had improved to start the year and he seemed to be leading a legitimate top-10 team. But the wheels have fallen off the Cowboys' wagon of late. They've lost five of six, and Smart has expressed visible frustrations on the court as his own game has tailed off, his shooting especially.

At the end of January, he also tweeted an apology after fuming over a poor performance against West Virginia by kicking a chair.

"I think Marcus puts a lot of pressure on himself," Ford said. "Lots of times he's handled it well, and other times, he hasn't. I never fault his intentions of when he goes out to play, to be his best. It may not have come across every single time as his best."

Shortly after Smart met with the media, a Texas Tech release acknowledged the Red Raiders went through an investigation of Orr, which included a statement from the fan and a video of the crowd noise in the vicinity of the altercation.

"I would like to take this opportunity to offer my sincere apologies to Marcus Smart, Oklahoma State, Tubby Smith and the Texas Tech Men's Basketball program. My actions last night were inappropriate and do not reflect myself or Texas Tech - a university I love dearly. I regret calling Mr. Smart a "piece of crap" but I want to make it known that I did not use a racial slur of any kind. Additionally, I would like to offer my apologies to Texas Tech fans that have been embarrassed by the attention this incident has created."

Orr volunteered to not attend a Texas Texas game for the rest of the basketball season.

• Around the Big 12: The pack strikes back

• Jabari Parker, Jahlil Okafor not thinking about next year