J.P. Mundy and Ben Swain are live from the Greensboro Coliseum, covering all the action from the 61st ACC Tournament.

That’s right, kids. Since Ninja Swoff decided to expand the league and send Maryland off to the mid-majors, there had to be some minor tweaking of the season-ending championship. Instead of starting the tournament on Thursday afternoon, patrons have the opportunity to start the party early -- three high-level basketball games and a bonus: a concert by Raleigh’s own American Idol, Scotty McCreery.

I know, I know. Even the Tournament organizers aren’t all that hyped for Wednesday basketball. The upper-deck curtain is still up from last week’s women’s tournament, and tickets for the event today are general admission. But, hey, at least it’s still in Greensboro -- as it always and forever should be.

SB Nation will be here all weekend, and my tag-team partner Ben Swain (noted writer, podcast host, and ACC xenophobe) will be keeping you updated on all the happenings in the home of the Atlantic Coast Conference. 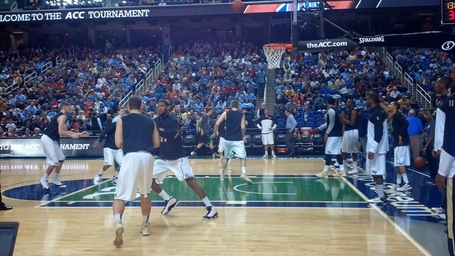 To Atlanta, D.C., or anywhere but Madison Square Garden as a host for this tourney. And if you go to New York, make sure it’s a one-off event, because travel is expensive, y’all, and there probably won’t be any barbecue. And that’s jacked up. Ben?

Selfishly, I love Greensboro for the convenience, but there’s no questioning that this town just embraces the tournament like no other. There are other venues that could do a great job of hosting the event, but the tournament would be just another attraction in New York, Atlanta or D.C. Having said all of that, MSG is a status symbol, and would be the ultimate trophy wife for the new-look ACC. Many would argue that’s all conference tournaments are good for in the at-large bid era. Hosting the tournament in Greensboro is like hosting your wedding reception in the church basement instead of renting out a restaurant. Enough with the nuptial metaphors.

Maybe I’m just being selfish, but there’s a chance we get to see two huge "threequels" this weekend. Syracuse/Duke III on Saturday, and Duke/UNC III for the championship on Sunday. I’ve never seen the 15-501 rivalry in person before, so that’s what I’m rooting for. That, and deep-fried pickles for the media snack on Thursday night. I imagine that Swain’s wish list includes some sort of Jeff Bzdelik-related fan conflict and a pair of the neon orange Miami shoes. Thoughts?

I think everyone will go home happy if they get to see Duke/Syracuse Part III, but even before that is the likelihood of an NC State/Syracuse rematch from yet another controversial finish from the Orange. On the top half of the bracket, I’m hoping for a Virginia/Maryland rematch from one of the most entertaining games of the entire ACC season –- a game that just happened to have been played just a few days ago. The No. 1 seed could go out in their first game of the tournament, and of course we’re one loss away from saying goodbye to Maryland forever in the ACC.

As I found out last year, one of the best parts of Tournament weekend is the Maryland pep band. Not for their adorable sophomoric antics, but rather for their expansive song cataloge. I hope they stick around for a while, just to hear "Born to Run" and "99 Luftballoons" again. Not to mention their countless renditions of "Teenage Mutant Ninja Turtles," which is tinged with irony this weekend. #NinjaSwoff. Also, it should be a league rule that the UNC pep band play the National Anthem … every game. The musical Tar Heels play a pitch-perfect arrangement that lasts roughly 90 seconds. There’s nothing that makes me cringe more than hearing a P.A. announcer say, "Here’s ____ with his/her original arrangement of …" No. Just no. Mr. Swain?

Pep bands, schmep bands. ACC Opening Day festivities include a concert by American Idol Scotty McCreery, and Eddie Money is playing a free concert on Saturday downtown. But seriously, it’s hard to beat Wake Forest’s electric bass and Miami’s electric guitar. Ultimately, the musical champion will be the Greensboro Coliseum itself. Last year between games, they played Juicy J’s "Bandz a Make Her Dance" over the P.A. My guess is that we get Beyonce’s "Drunk in Love" this year. Just a hunch.

Anywho, we’ll be here all weekend long, even if Notre Dame won’t be. 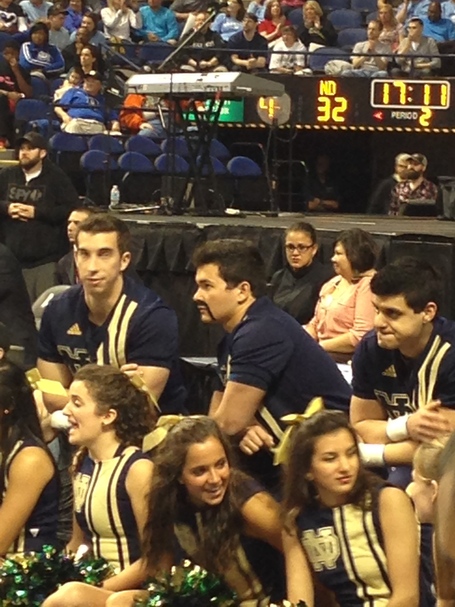 Live at the ACC Tournament: Virginia knocks off Duke