Louisville might be the hottest team in college basketball. But the Cards got a No. 4 seed.

Share All sharing options for: 2014 NCAA Tournament: Louisville, Louisville, and the other four most underseeded teams

The 2014 NCAA Tournament bracket is out and, as always, the selection committee has proven to be somewhat fallible. Here are the five most underseeded teams, whose beefs with Indianapolis are very much valid.

Louisville has won its last four games by an average of 33 points. Two of those games were against UConn, given a No. 7 seed by this same selection committee, and three were in the American Athletic Conference Tournament. And the Cardinals are probably the scariest team in this field, outside of No. 1 seeds Florida and Wichita State, because of their balance — it's just really hard to score with or score on the Cards.

So, yeah, a No. 4 seed makes a ton of sense for Rick Pitino, Russ Smith and the rest.

Louisville was never bound for a No. 1 seed, despite some insane chatter suggesting that as a possibility in the waning hours of Selection Sunday before the hour of revelation, because of its horrific non-conference schedule — best win: Southern Miss? Louisiana? — but the Cardinals looked to have played their way up to the No. 3 line, especially given how nearly every other national power seemed to go cold late in the season.

Instead, Louisville will be the No. 4 seed in Wichita State's region, and lurking as a booby prize for the unbeaten Shockers in the Sweet Sixteen. 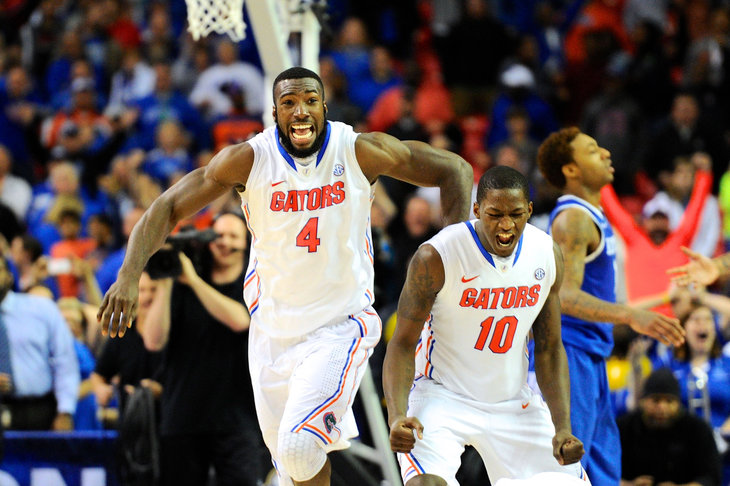 Well, if Wichita State gets past Kentucky, anyway.

The Wildcats have 10 losses. They lost to Arkansas twice, and to LSU and South Carolina once. They did not deliver on the potential of a 40-0 season promised by the best recruiting class of all time, not nearly.

They are the scariest damn No. 8 seed I've ever seen.

The No. 8 and No. 9 lines are often easy places for the selection committee to stash a really good mid-major (Wichita State in 2013, Butler in 2011) or an underwhelming if copiously talented major conference team (Louisville in 2010, Kentucky in 2007). If that team plays well enough to beat a No. 1 seed and make a Sweet Sixteen, great: That team was good enough to prove the selection committee wrong. If that team loses to a No. 8 or No. 9 seed, well, that's vindication.

Kentucky is good enough to have taken No. 1 overall seed Florida to the final possession at a "neutral" site (Kentucky fans made up the majority of the crowd) in Atlanta on Sunday, and really did look to have figured out many of its issues over the three days of the SEC Tournament. Its non-conference resume was excellent, too, with a win over Louisville and games against Michigan State, Baylor, and Providence.

Putting that team across from Wichita State such that only one of the two teams can make the Sweet Sixteen is either sadistic or brilliant — and given that there's no chance whatsoever that Wichita State will have more fans in St. Louis than Kentucky will, despite the Shockers' proximity, sadistic is the better bet. But it's unfair to Kentucky, too, which deserved better than to be fed to a No. 1 seed. (Also, Kansas State? Look out.)

The Lobos just took a rubber match against San Diego State in the Mountain West Tournament final, and San Diego State is a No. 4 seed over on the other side of the bracket. They played Kansas, Cincinnati, Massachusetts, and New Mexico State (twice) in non-conference play.

Their reward? A No. 7 seed, a first game against a Stanford squad that has a lot of talented players, and a potential rematch with Kansas in St. Louis for the privilege of getting to the Sweet Sixteen. Gulp.

No, neither Iowa nor Tennessee beat virtually anyone all season — Tennessee's beatdown of Virginia is the best win either team had, and the Vols bookended that win with wins over Morehead State and D-2 Tusculum, while Iowa's best win is Michigan. They're in a play-in game for good reason.

But Tennessee is currently No. 13 in KenPom's efficiency-based rankings, and Iowa is No. 27 after spending much of the year in the top 15, and quite a while in the top 10. These are really good teams that have been banished to Dayton for sport, ones that would have worried a lot of No. 2 seeds if they had been on the No. 10 line.

And if we're going to be giving KenPom rankings as evidence for Iowa and Tennessee: Louisville is No. 2, ahead of where the Cardinals were heading into the 2013 NCAA Tournament — which they won, as you may recall — and behind only Arizona.

Good news for the Cards: Two other No. 4 seeds have finished in the KenPom top-five in the last five years, and both 2011 Kentucky and 2013 Michigan made the Final Four.