How Vee Sanford put Dayton in the Round of 32

It might have looked like Dayton ran an isolation for Vee Sanford in the final moments of its win over Ohio State, but a tricky bit of a motion set the play forward and allowed the Flyers to get the go-ahead bucket.

Share All sharing options for: How Vee Sanford put Dayton in the Round of 32

Sometimes, the best last-second plays don't look like plays at all, at least not on the surface. Our eyes are trained to follow the ball, and with game on the line, that generally involves someone dribbling, often against one defender, before shooting. When these plays don't work, we bemoan coaches for seemingly calling timeouts just to tell their team to give it to their best player and clear out.

The end of Dayton's upset victory over Ohio State was a perfect example. To the naked eye, Dayton's Vee Sanford took Aaron Craft off the dribble and floated a right-handed bank shot off the glass to give Dayton the victory.

It looks like the Flyers simply told their best player to beat Ohio State's best defender. But it's more complex than that.

It starts at the beginning, when three Dayton players begin well above the three-point line. This is a signal to Ohio State that something is up. Surely, all three aren't needed to get the remaining player open, so why are they there? 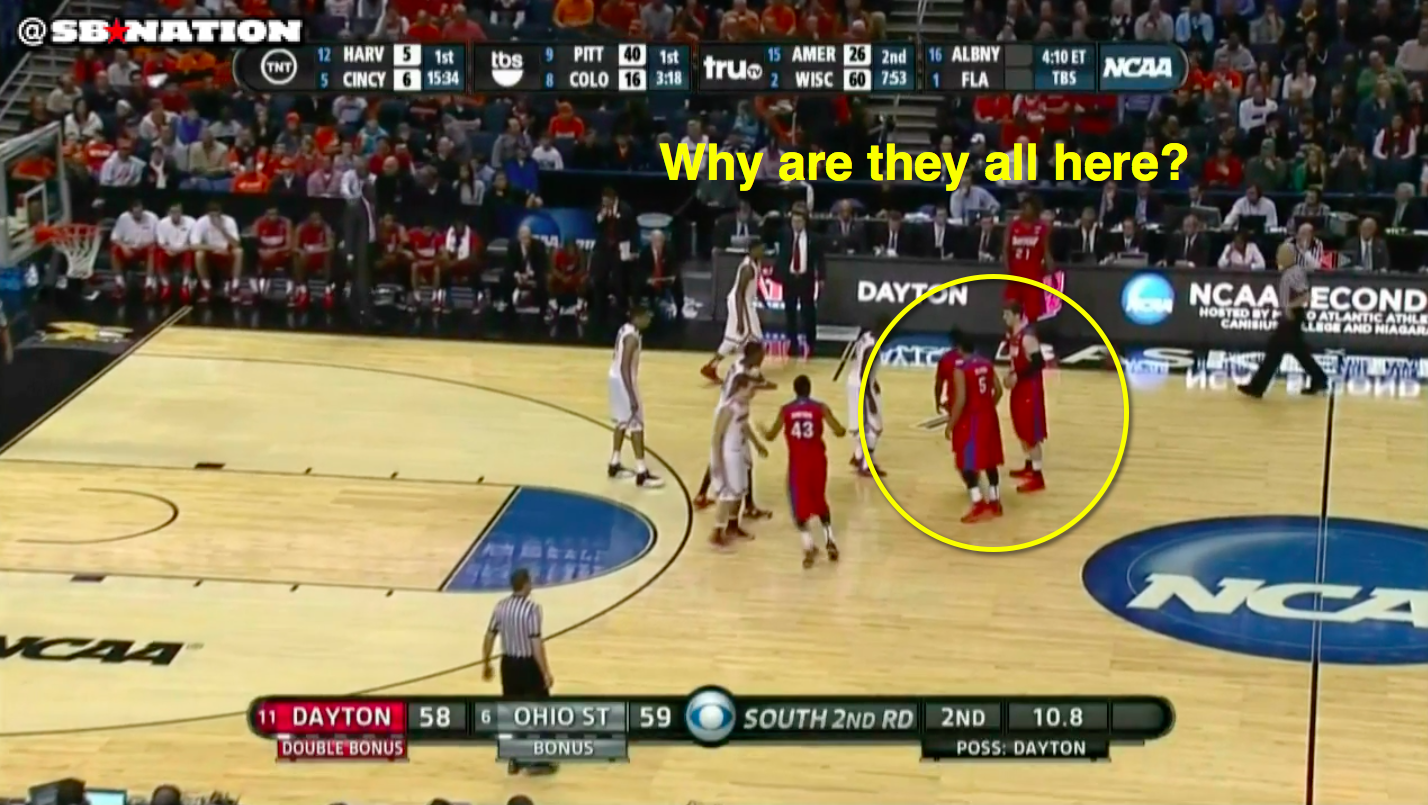 As it turns out, it's mostly a false signal. Once Sanford catches the ball, two of these three players fan out to different parts of the court to space the floor for the main action. As they do so, they draw the attention of their own defenders, who think, for a split second, that something is up with them. This is why they don't just start where they finish. By beginning up high and then moving to different spots on the court, they occupy the attention of the Ohio State players who could help on the main drive. 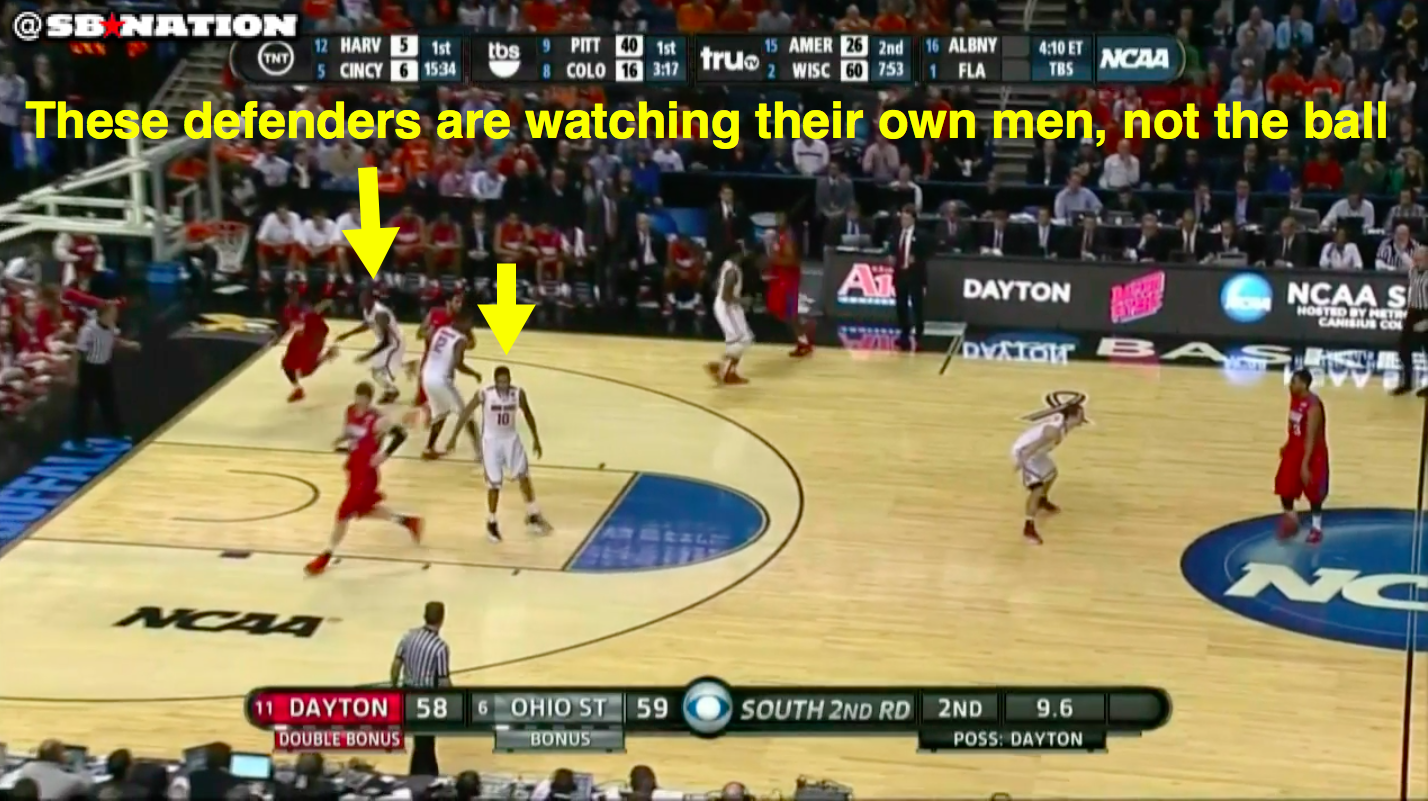 This'll pay off down the road. For now, though, the third of those three players, Devin Oliver, plants his foot sharply and comes toward the ball. It looks like he's doing this to set a ball screen on Sanford's right ... i.e. Craft's left. This would be a typical last-second action; often effective if not terribly creative. 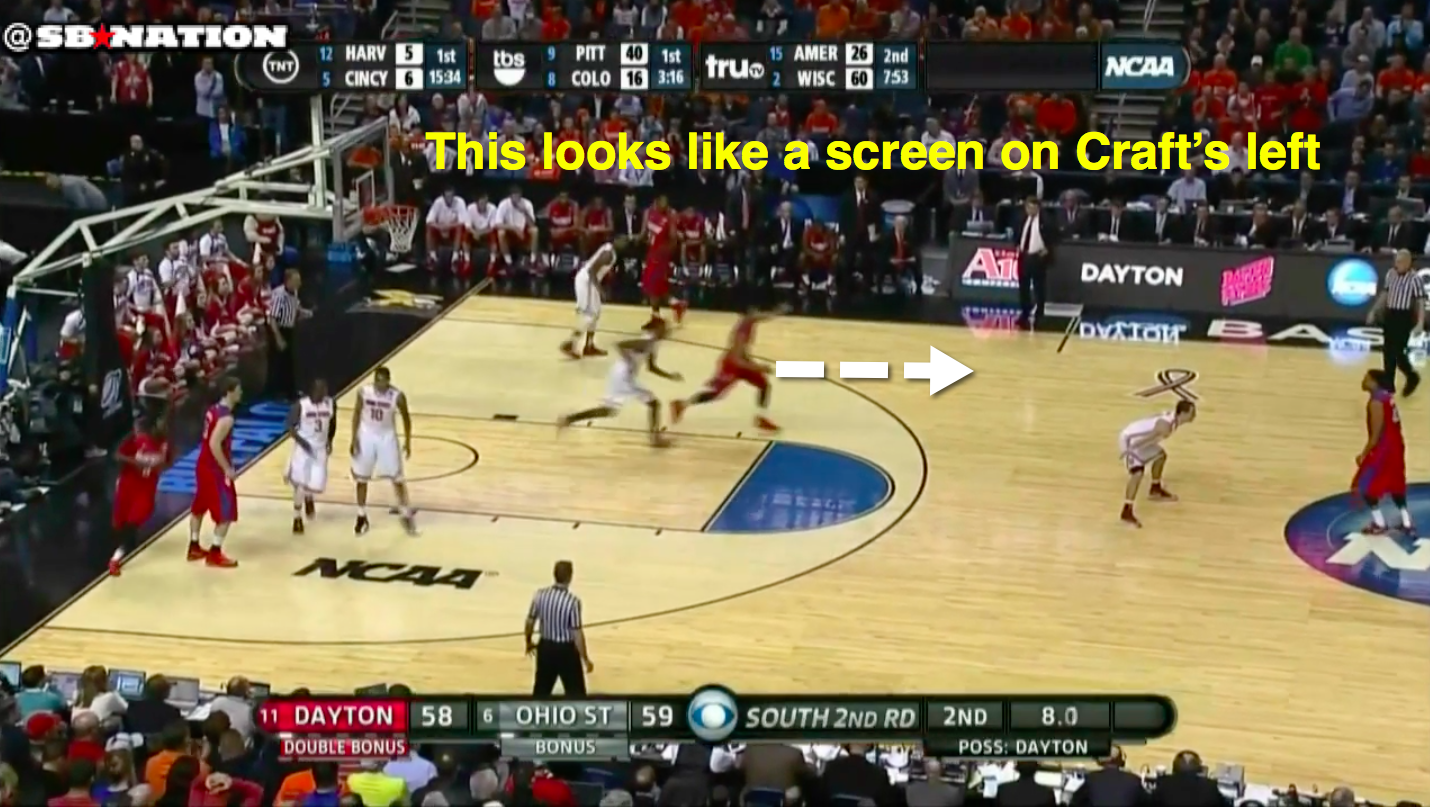 And as such, the Buckeyes must now construct a team alignment to stop the pick and roll. They do so with a tactic often known as ICE (or blue, as our Doug Eberhardt noted). The goal is to force the ball-handler one way, where he'll get swallowed up by the helping big man. Notice how Craft shades slightly to Sanford's left and Sam Thompson sets up on Sanford's right. They are ready to pounce. 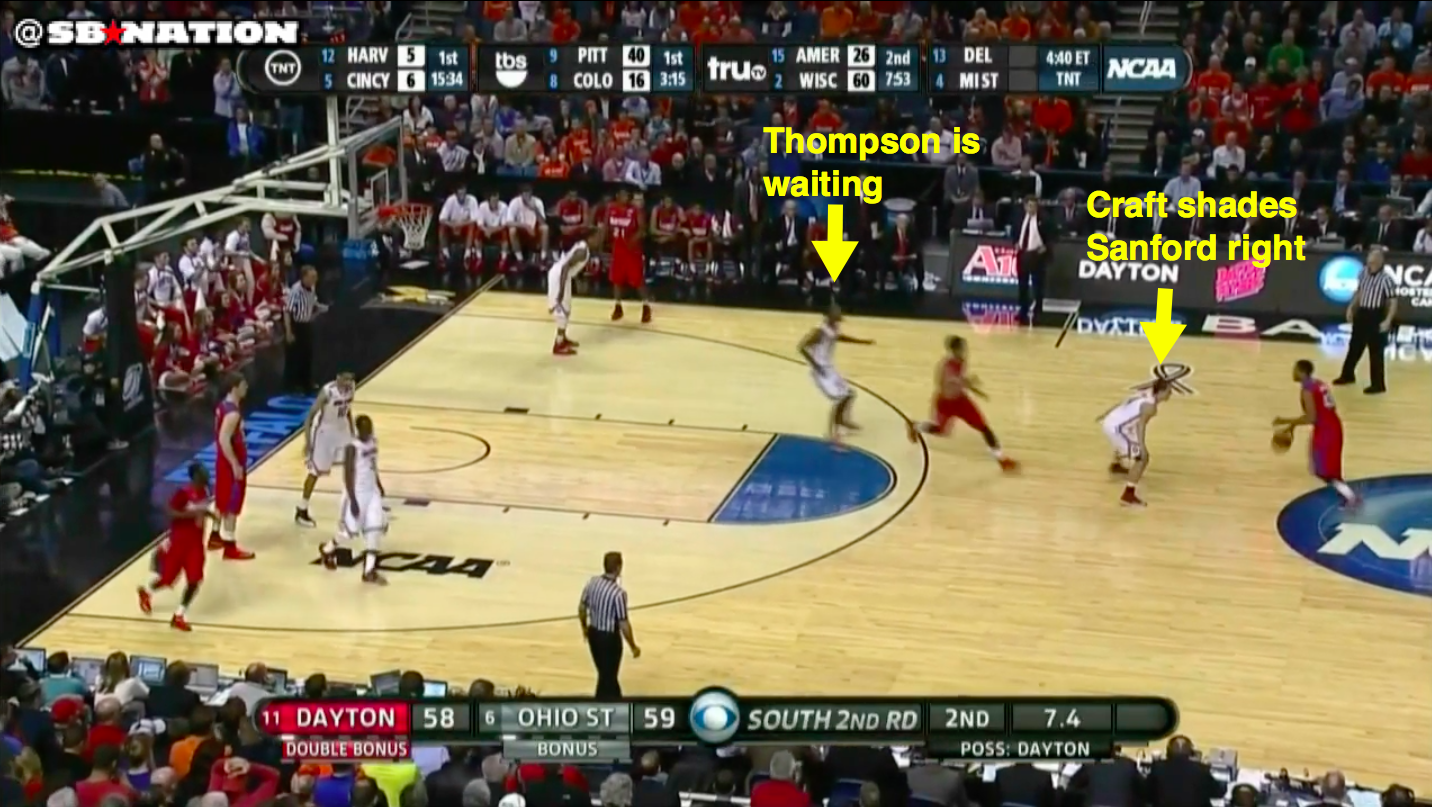 Except ... that's not really what Dayton is doing. Let's run this back again: 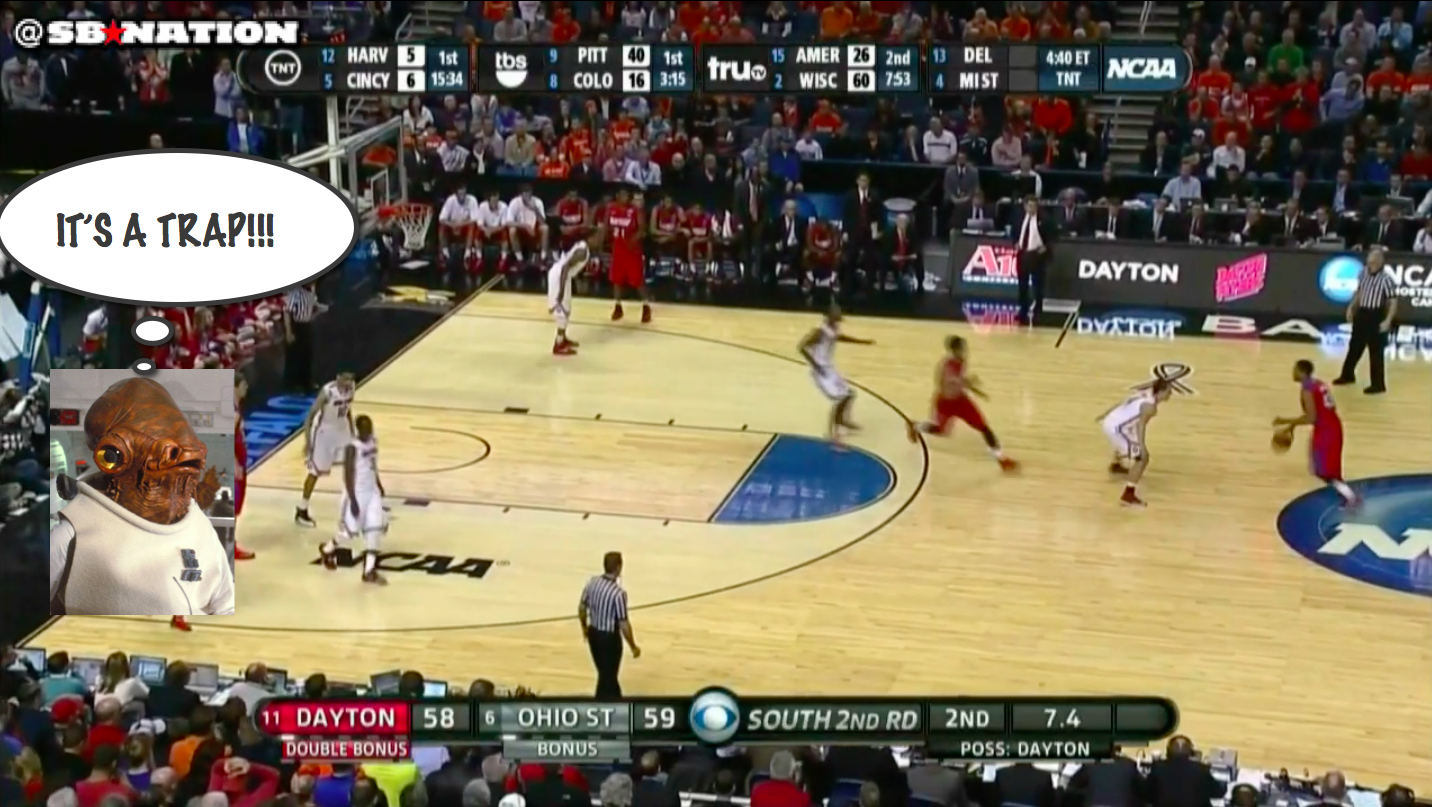 See, Oliver isn't coming to set a screen at all. You can already see it in the above screenshot: he's actually running away from the play. After convincing Ohio State that he is setting a pick on Craft's left, he veers back to Craft's right and goes well past the ball.

This causes the Buckeyes to panic a bit. If they stick to their original pick-and-roll coverage, Oliver suddenly is open from the perimeter. Thus, Thompson abandons his position and continues to run with Oliver. The problem is that Craft is still shading Sanford to go right, even though Thompson is about to leave. 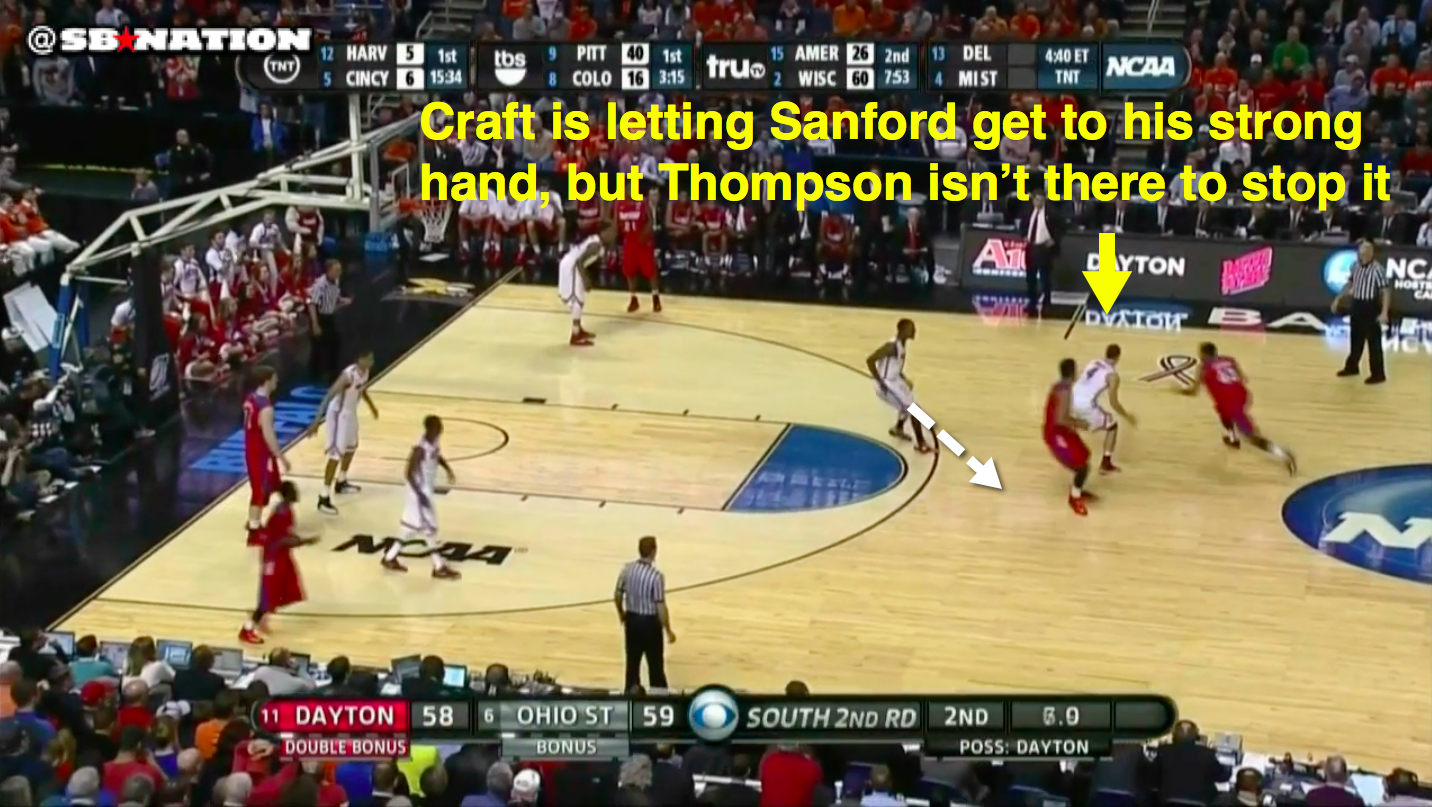 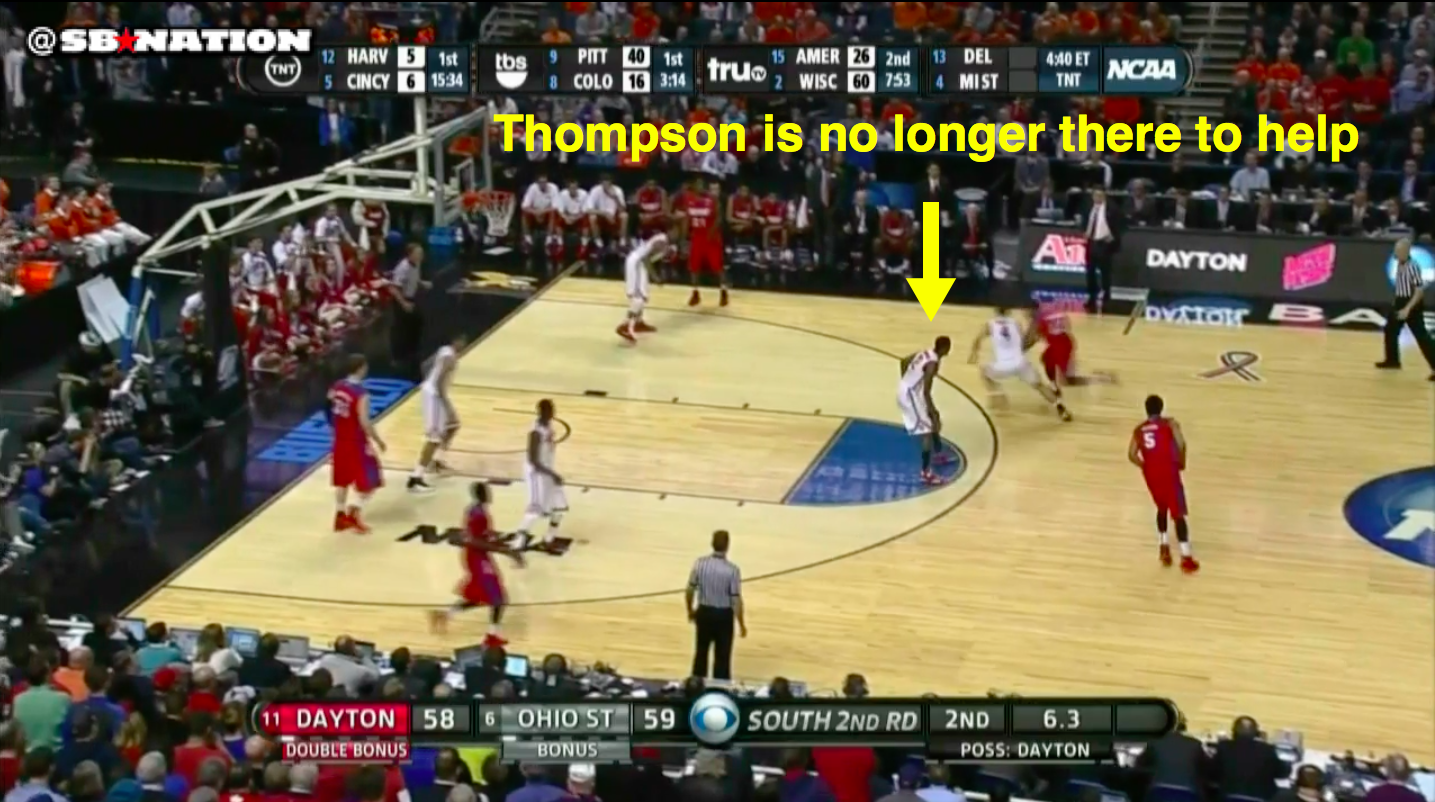 This is how Sanford is able to get to his right. Craft recovers as best he can, but he's already yielded a step. Lenzelle Smith tries to swipe from the corner, but you're taught never to leave the corner shooter on the same side open, so his help is useless. The other two Ohio State players are focused on their men on the other side -- remember the misdirection at the beginning? -- and can't help either. Sanford is able to get close to the rim, stop on a dime and hit the floater.

It's nothing overly complex, but that bit of motion is enough to confuse Ohio State. It's easy to sit here and say that the Buckeyes screwed up their defensive coverage. Thompson certainly overreacted to Oliver's fake screen -- he would have caught the ball far away from the hoop had Thompson held his position longer -- and Craft was a tick too slow realizing he needed to slide back to Sanford's right to stop the drive. But it's really hard for professionals, much less college kids, to react perfectly to this kind of misdirection in real time. There's a reason why the Denver Nuggets got great results running a similar play last year.

Credit Archie Miller and the Flyers for executing a beauty in the biggest moment of their lives.