The Crimson held Cincinnati under 40 percent shooting, riding a balanced offensive attack to advance to the Round of 32.

Harvard knocked Cincinnati out of the NCAA Tournament with a classic "12 over 5" upset, 61-57. The Bearcats, who won a share of the American Athletic Conference regular-season title, are the first power conference champion to be upset.

Harvard spread the ball around, using weaves and handoffs to get the ball in the paint. Laurent Rivard scored 11 points, shooting 3-of-5 from behind the arc. Rivard was the only Crimson player to get going from deep, as the rest of the team shot 3-of-12.

Sean Kilpatrick was his usual self, scoring 18 points for the Bearcats. Cincinnati took care of the basketball most of the game, but went long stretches without scoring a field goal.

The Crimson will play the winner of Michigan State and Delaware.

The Badgers held American to just 13 points in the second half, negating a strong start by the Eagles. It was the backcourt that led the way for Wisconsin, with Ben Brust and Traevon Jackson combining to score 35 points. Leading scorers Frank Kaminsky and Sam Dekker were quiet, combining for just 19.

The Flyers pulled off the first upset of the tournament when Aaron Craft's potential game-winner clanged off the iron. It was Vee Sanford who won the game for Dayton, hitting a runner with six seconds remaining in the game. Ohio State fails to advance to the Sweet 16 for the first time in five seasons.

Pittsburgh shellacked the Buffaloes, jumping out to a 13-0 lead and never looking back. Talib Zanna scored 18 points to lead the Panthers, who dropped 46 in the first half alone. Colorado was playing without Spencer Dinwiddie, who was lost midseason to a knee injury. 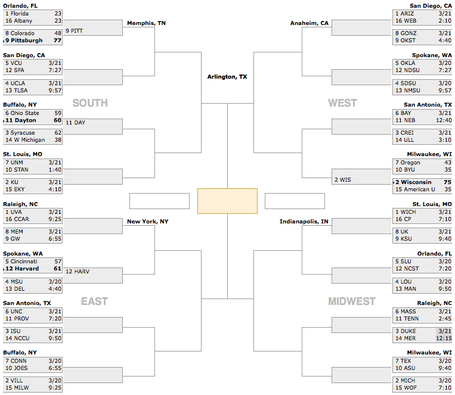