Arizona State rallied back to tie it up against Texas and forced a missed shot on the final possession. Then, they got their damn hearts broken.

Arizona State fought against Texas, and they fought hard. The No. 10 Sun Devils were down 14, but put together a run to tie the game up and briefly take the lead.

The reaction from the Arizona State bench is HEARTBREAKING.

Let's get that still for posterity: 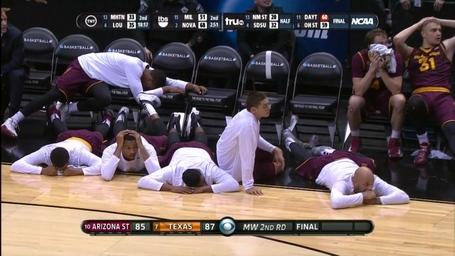 Ridley finished with 17 boards and 12 rebounds, including four points on two huge boards in the games last three minutes. You gotta grab defensive rebounds, y'all.

So far, on the first day of MADNESS, we've had three overtime games, a second-to-last-possession game winner for Dayton, and now this. Long live the NCAA tournament.