The final eight teams will punch their ticket to the Sweet 16 on Sunday. Here is the full schedule.

There are eight more terrific games on the slate for Sunday after a couple of awesome days on the hardwood. Just when it seems like a game can't be outdone, the next one delivers even more.

Here is the full schedule for Sunday's games, with the winners moving onto the Sweet 16. All times are Eastern. 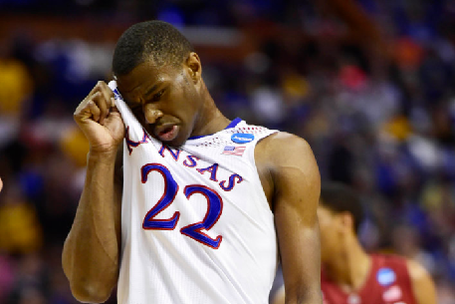 The Jayhawks struggled without Joel Embiid in their first game of the tournament against Eastern Kentucky. Now, KU will have its hands full with a Stanford team that is more than capable of pulling off an upset, having toppled New Mexico in the second round. The Cardinal have plenty of scorers, including guard Chasson Randle, who dropped 23 against the Lobos on Thursday. Keep an eye on this one.

Whether or not you're a fan of Wichita State or Kentucky, there were few matchups in the Big Dance more desirable than this one. The undefeated Shockers will face their toughest challenge so far this season as they take the floor against the youthful Wildcats. Is 36-0 in the cards for WSU, or does UK end the streak and march into the second weekend of play?

This game lost some serious star power when Iowa State forward Georges Niang broke his foot in the second round. The Cyclones still have the talent to beat UNC if everyone plays well, but it's tough to really know where the rest of the team will be, mentally.

Could Mercer be this year's Cinderella? After stunning Duke earlier in the week, it's clear the Bears have the talent and experience needed to advance to the Sweet 16. However, they will need to match the physicality of this Tennessee team, which appears to be playing its best basketball of the season.

It's still tough to believe Stephen F. Austin is alive and kicking after an incredible comeback on Friday night. But the Lumberjacks won't have long to celebrate their victory because UCLA is really stinkin' good. Kyle Anderson is a matchup nightmare and Jordan Adams can score from every spot on the floor. If that wasn't enough, Norman Powell has scored 15+ points in each of his last three games.

Defense will be somewhat optional in this one as two of the nation's top offenses take the floor. Doug McDermott and the Bluejays shooters have the range to tear up Baylor's zone, but if they have an off night the Bears could easily pull the upset with their size advantage in the paint.

The top-seeded Cavaliers struggled to put away Coastal Carolina in the opening game. Was it just a case of Big Dance jitters for Tony Bennett's boys, or is it a sign of things to come? Regardless, UVA will really need to get out and defend Memphis guards Joe Jackson and Michael Dixon, who are both capable of taking over a game.

Two of the three winningest programs on the west coast over the last decade match up, with the Wildcats looking to reach their third Sweet 16 in four years against the Zags. The Bulldogs have four double-digit scorers on their roster and can really shoot the ball, but they have yet to see a defense like Arizona's. Matching up with Aaron Gordon and Rondae Hollis-Jefferson on the wings could be a real issue for Mark Few.