NCAA Tournament 2014: Best and worst of all Saturday's madness

On a day where little else was anything close to resembling "mad," the Dayton Flyers owned their moment.

Share All sharing options for: NCAA Tournament 2014: Best and worst of all Saturday's madness

The first Saturday of the NCAA Tournament featured a two-point thriller, a big-time upset and a thrilling final minute...in one game. The rest of the day was interesting, but featured a grand total of zero games that were decided by less than seven points. I suppose they can't all be classics. The opening 48 hours may have spoiled us just a tad.

The Dayton Flyers are headed to the Sweet 16 for the first time since 1984 after knocking off a Syracuse team that seemingly yesterday was 25-0.

Tyler Ennis, the main catalyst to that 25-0 start and the player who became known for his late-game heroics after beating Pittsburgh at the buzzer in February, had a good look at a potential game-winning three-pointer at the buzzer, but found all iron.

"The thing that went through my head was the Pitt game," Dayton coach Archie Miller admitted after the game. "I saw that highlight on SportsCenter 7,000 times when he banged the three on Pitt."

Instead, Ennis simply capped off an evening where Syracuse failed to make a single three-pointer, finishing the game 0-10. The freshman guard made a few key plays down the stretch and finished with a team-high 19 points, but he was just 7-of-21 from the field.

Dyshawn Pierre, whose missed free-throw gave Ennis the opportunity to win the game, finished with 14 points for the Flyers, while Jordan Sibert chipped in 10.

It was a rewarding evening for Dayton fans, who have consistently been ranked among the nation's top 25 in attendance despite supporting a team that hasn't made the tournament's second weekend in three decades. Between this, Thursday's upset win and St. Patrick's Day on Tuesday, there may have never been a better week to reside in the UD Ghetto.

After leading by 14 at halftime and by as a many as 16 in the second half, Michigan State found itself down two and facing elimination with 7:11 to play following a Lauren Rivard three-pointer. The Spartans answered by doing what tournament favorites are supposed to do in these moments, and went on an 8-0 run spearheaded by a pair of threes from Travis Trice and Gary Harris.

The run put Sparty back in control and stayed there despite some gutty plays from Rivard and Crimson star Wesley Saunders.

Harris finished with 17 points, but it was Branden Dawson who was the star of stars for Tom Izzo's team, as the oft-injured big man posted a career-high 26 points on 12-of-15 shooting to go with nine rebounds. Saunders led Harvard with 22 points.

Oregon owned the first 20 minutes at the Bradley Center, carrying a 12-point lead into the break. The Badgers responded by opening the second half with a 25-10 run that allowed them to momentarily seize an advantage. The teams then traded body blows before Wisconsin was able to string together the game's final run.

The game's marquee moment occurred in the final two minutes with Oregon clinging to a 75-74 lead. Wisconsin would grab offensive rebounds on three-pointer, a 15-foot jumper and a missed lay-up before Ben Brust finally stuck a trey to give Bucky a lead it wouldn't relinquish.

Big man Frank "Fupps" Kaminsky was again the star for Bo Ryan's club, posting 19 points on an efficient 8-for-15 from the field. Oregon's Joseph Young led all scorers with 29.

3 TEAMS THAT WON IT THE BEST

Nik Sauskas got the party started with three early triples to give the Wolverines a sizable advantage, and then spent the rest of the day hooking his teammates up. The Big Ten Player of the Year finished with 17 points and eight assists as Michigan rolled to a 79-65 win over seventh-seeded Texas.

The scariest thing about Michigan's performance for the rest of the Midwest Region (and every other region, I suppose) is that the Wolverines buried 14-of-28 attempts from beyond the arc, a program record for made three-pointers in a tournament game.

The team that was oh so close to a national title less than 12 months ago has looked even more impressive through two rounds this season than it did with Trey Burke at the helm. That's a frightening thought for anyone standing between the Wolverines and their second national title.

The Aztecs had little sympathy for America's darlings (or at least one of America's darlings), using their trademark lockdown defense to hold North Dakota State to 15-of-48 shooting and just 44 points. The 63 that SDSU posted were more than enough.

As they have all season, the Aztecs rode the back of Mountain West Player of the Year Xavier Thames, who scored 30 points, nearly half of his team's total. The dominant victory helped erase the painful memory of falling to Cinderella Florida Gulf Coast in this round a season ago.

San Diego State will now get a shot at the Elite Eight next week against either Arizona or Gonzaga, two teams that would force the Aztecs to find more offense than they needed to get past New Mexico State and NDSU.

They didn't win by as much as teams like Florida or Louisville, but the Badgers' second half performance against an Oregon team that had appeared poised to pull the upset should make each one of their doubters take notice.

I'm not sure what it's going to take for people to realize that this Wisconsin team is nothing like the Bo Ryan teams they've come to know and flip the channel to avoid watching for the past couple of decades. Bucky can post some big numbers, and their 80.0 ppg scoring average through two rounds (they also could have hung 100 on American if they really wanted to) is evidence of that.

It's pretty impossible to avoid this distinction when you're the only team to lose to a double-digit seed on a day of tournament play, an achievement that Syracuse will now have to carry with it into the offseason.

Still, the "disappointment" here is as much about the Orange's last month as it is Saturday's performance. The Cuse dropped six of its final nine games, and scored less than 70 points in all but two of those contests. A disappointing end to an otherwise brilliant career for C.J. Fair and, perhaps, fuel to the fire for Tyler Ennis, who has a big decision to make in the coming weeks.

The fact that Connecticut didn't even make an appearance on the "won it best" list shows that I didn't think much of Villanova as a 2 seed, but that doesn't mean the Wildcats weren't disappointing on Saturday night. They became the best-seeded team to drop in the tournament so far, and did so in especially poor fashion, falling to UConn, 77-65.

Jay Wright's team committed one of the biggest sins of March and let the other team's best player beat them. Despite playing with a shin injury down the stretch, Shabazz Napier dropped 21 points on Nova after halftime and finished with a game-high 25 to send the Wildcats into the offseason.

There wasn't another viewing option at the time the Billikens were attempting to upset fourth-seeded Louisville, which meant the entire sports world saw SLU stuck on four points for what felt like six months and struggle to even get a shot up for much of the first half.

Saint Louis did manage to make a run after the break and take a two point lead, but they withered when Louisville answered and never really threatened to upset the Cardinals again. The Billikens missed all 15 of their three-point attempts, turned the ball over 18 times and were just 9-of-16 from the free-throw line. It was a disappointing and uncharacteristic end for one of the few teams in the country that starts five seniors.

The Mountain West Player of the Year scored 30 points in SDSU's dominant win over North Dakota State. The rest of his team scored 33.

Dawson has been arguably the biggest question mark among Michigan State's stars all season, but he gave perhaps the best performance of his Spartan career in one of the team's biggest games, posting a career-high 26 points on 12-of-15 shooting. He also snagged nine rebounds.

The Ducks' star went down swinging by scoring a game-high 29 points.

Napier was unconscious in the second half, which is where he scored 21 of his game-high 25 points.

Hancock was the lone offensive threat in a game where points were at a premium. The Most Outstanding Player of the 2013 Final Four hit four threes and finished with a game-high 21 points to lift the Cardinals back into the Sweet 16.

1. The lack of multiple games to start the day

I get that there's a method to the madness of the day three television setup, but the risk inherent in the setup was on full display Saturday. For the first four and-a-half hours or so of the day, viewers had no other option but to watch Florida dominate Pitt and Louisville and Saint Louis attempt to out-turnover one another. That's a pretty extreme transition to make when you've gotten accustomed to having no less than three games on simultaneously at all hours of the day.

This is happening more and more often and the tournament is only putting a larger spotlight on it. Just make the call without attracting attention to yourself. It's not an over-the-top request.

3. The lack of exciting final minutes

Dayton/Syracuse laid the foundation for what was shaping up to be a tremendous evening, but Oregon and Harvard (and Villanova to a lesser extent) couldn't answer the bell when they had a chance.

The Flyers pretty much carried this day in every respect. The upset, the close final minute, the postgame dancing, the raucous pictures from campus (coming in a second); this was simply Dayton's day. A nice reward for a 30-year wait.

I'm not sure what this thing is, but I've been enjoying it.

The best part of this entire night may have been the depressed Syracuse fans sitting behind the bench who started to do it in rhythm with the players near the end of the game.

This could be my favorite play of the tournament to date.

He basically just swatted the absolute hell out of a loose ball.

Not a whole lot of cramming happened on Saturday, so Stauskas to GR III gets to take top billing. 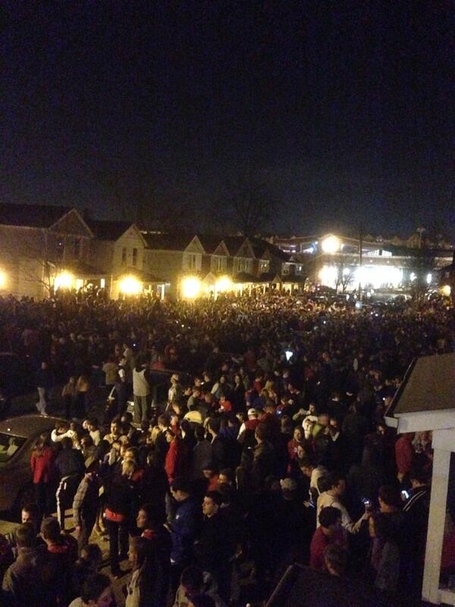 2. Jacked cameraman in Buffalo enjoyed his as well.

I mean...was Wilbekin actually in Finding Forrester and we didn't know about it? pic.twitter.com/2Nlon1EJWY

Yep, citing myself on this one because I'm THAT blown away by the resemblance.

1. "It's only the greatest professional week of my life. I got to watch a group of guys that deserved it, who wanted it so bad, and made it a priority in their life and did everything I asked them to do. This season? Wow. Let's just say this: It's why I do what I do. And I lose the six guys out that door, Charles Barkley can make fun of me now, it's fine. Hey, I love these guys. Absolutely love them. Love 'em. I hope that comes close to answering it. Next question." --An emotional NDSU coach Saul Phillips after being asked what memories he would take away from this week

2. "I thought I got a really good look. I didn't think I had enough time to get to the basket. I think the look I got, I think everybody was happy with it. I thought it was good." --Syracuse point guard Tyler Ennis on his potential game-winner

3. "We're not in Dallas. What is there to celebrate?" --Louisville's Montrezl Harrell after being asked why the locker room didn't seem more excited following the Cardinals' win over Saint Louis