The Sweet 16 is now set after an evening of blowouts on Sunday. Here is an updated, printable PDF version of the bracket.

The Sweet 16 is officially set after a busy day on the hardwood. Here is a look back at the four games from Sunday night, including top-seeded Arizona's impressive performance against Gonzaga.

The Wildcats have the top-rated defense in the country, and it was really on display as Arizona blew out Gonzaga to advance to their third Sweet 16 in four years. This reverse alley-oop dunk from Pac-12 Player of the Year Nick Johnson to Pac-12 Freshman of the Year Aaron Gordon was just one of many dunks the 'Cats had.

Next up for UA is a rematch with San Diego State in Anaheim. The Wildcats beat SDSU at Viejas Arena back in November, 68-60.

This game was actually pretty close for the first 10 minutes or so. Then the Cavaliers started to really dig in on the defensive end and caught fire on the other end, hitting 57 percent of their shots. Memphis just couldn't get anything to fall and started settling for ill-fated jumpers. If Tony Bennett doesn't send in his walk-ons for the final few minutes, the Cavaliers would've won by 25+.

Joe Harris found his shooting stroke and finished with a team-high 16 points. Anthony Gill came off the bench to get 13 points and eight rebounds, while Mike Tobey scored 11 points, brought down five boards and blocked two shots. After struggling to put away Coastal Carolina in the second round, the Cavaliers looked the part of a Final Four team on Sunday night. Next up will be a showdown with Michigan State. 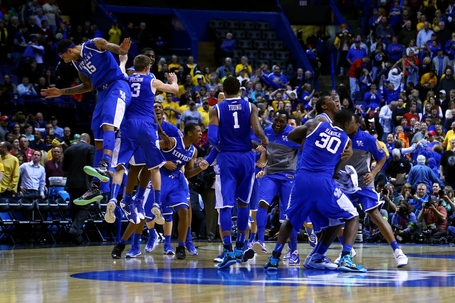 Baylor's size and athleticism advantages were just too much for Doug McDermott and Creighton to overcome. The Bears opened the game on a 19-7 run and never looked back, imposing their will on both ends of the floor. Scott Drew's boys shot 64 percent from the floor, out-rebounded the Jays by 10 and hit 11-of-18 three-point attempts.

It was a rough way for McDermott to end his career. The senior forward just wasn't able to get in any kind of a rhythm and finished with 15 points. Austin Chatman was the only other player to reach double-digits in scoring for Creighton.

Baylor will face Wisconsin in the Sweet 16. That game could be phenomenal, and you have to wonder if Baylor's size and athleticism with bother the Badgers the way it did the Blue Jays.

This one was never really in doubt as the Bruins dominated the Lumberjacks on both ends of the floor. For as well as Stephen F. Austin competed with VCU in the second round, there was no answer for UCLA's dynamic backcourt trio of Kyle Anderson, Jordan Adams and Norman Powell. Adams scored a team-high 19 points, Anderson had 15 points, eight rebounds and five assists, and Powell was 6-of-9 from the floor to finish with 16 points and three steals.

After their wild comeback win over VCU, it seemed like the Lumberjacks were playing with house money on Sunday night. Thomas Walkup was one of the few bright spots with 22 points and 11 rebounds.

Here is an updated, printable PDF version of the bracket.