The Madness is back. Thank you, God Shammgod.

Share All sharing options for: The 2014 Sweet 16 by the numbers

The awkward three days between the end of the first weekend of the tournament and the start of the Sweet 16 are the most painful on the sports calendar. After three straight weeks of non-stop league championship races, conference tournament games and NCAA Tournament thrillers, we're left with nothing to do besides watching ordinary television programs and interacting with other human beings.

Thankfully, the madness takes hold of us again on Thursday night, and it won't let go until the Final Four is settled on Sunday. In accordance with this being the Sweet 16, here are 16 things you should know to prepare yourself for what's about to go down.

Thursday's meeting will be the first ever between Wisconsin and Baylor, a pair of major programs that might have had less in common than any other over the past decade or so. Bo Ryan's Badgers are known for meticulous half-court sets, tough defense, low scoring and getting the most out of their ability. Scott Drew's Bears are known for getting up and down, putting up points, giving up points and having a healthy amount of next-level talent. It's a stereotype that doesn't work especially well this year, as both teams have developed a reputation for being able to light up the scoreboard, which should surprise and enthrall the casual viewing public.

That's how many Millers will be coaching teams in regional semifinals this week, the first time that two brothers have ever led their teams into the Sweet 16 in the same season. Sean, 45, has been one of the hottest names in coaching for years now, while Archie, 35, has become arguably the biggest star of March after leading Dayton to the second weekend of the tournament for the first time since 1984.

This is the third time that Arizona has been the No. 1 seed of a regional played in Anaheim. The first two didn't work out particularly well. In 1998, the Wildcats were embarrassed by eventual national runner-up Utah, 76-51. Five years later they fell again in the Elite 8, this time in a 78-75 heartbreaker to second-seeded Kansas.

No. 1 overall seed Florida is the only team in the Sweet 16 that has been there each of the past four seasons. Next up for the Gators is attempting to break its streak of three consecutive losses in the Elite 8 ... hopefully not by losing to UCLA a round earlier.

As the NCAA Tournament resets on Thursday, these 16 questions will determine moves on to the Elite 8.

An 11-seed has won in the Sweet 16 five times in tournament history, and each time it was paired up against a No. 1 seed in the Elite 8. The good news for Dayton and Tennessee? In those five games, the 11-seed has actually prevailed and moved on to the Final Four three times -- LSU in 1986, George Mason in 2006 and VCU in 2011.

The number of meetings Kentucky and Louisville will have had in the NCAA Tournament after Friday night. The game will make UK and U of L the third-most frequent pairing in NCAA Tournament history. Kentucky has won three of the five in-state showdowns, including an eight-point victory in the Final Four two years ago. While Louisville is a game behind, the Cardinals still own perhaps the most significant victory in the series: the 1983 Mideast Regional final, an event so huge that it resulted in state legislators threatening to force the game to happen if the two sides didn't agree to play annually.

The much-maligned SEC is the first conference to enter the Sweet 16 with a record of 7-0 or better since the Big East went 8-0 in the tournament's first weekend back in 2003. No. 1 overall seed Florida was expected to contribute its pair of wins to the cause, and many people thought Tennessee and Kentucky would make the round of 32, but UK's upset of previously unbeaten Wichita State and UT's ability to, well, play Mercer allowed for perfection through seven games.

SEC Basketball On the Rise

From football fever to March Madness

UCLA destroyed its first two tournament opponents on the break, but Florida enters Thursday night's contest allowing just 9.0 transition points per game. For the season, the Bruins are averaging 19.7 ppg and shooting 57 percent on the break, but the Gators have held their opponents to 43 percent shooting in transition. Steve Alford's team likely isn't going to knock off the No. 1 overall seed on cheap points alone.

The number of teams still standing that have national championships to their credit. UCLA has 11, Kentucky's got eight, Louisville and Connecticut both have three, Florida and Michigan have a pair, and Arizona, Michigan, Stanford and Wisconsin all have one.

Rick Pitino is unbeaten in 11 career Sweet 16 appearances, but the perfect record only tells half the story. Pitino has been beyond dominant in those 11 regional semifinals, winning them by an average 19.8 points. Before last season's 77-69 win over Oregon, Pitino had never won a Sweet 16 game by less than double digits. He's won five times by 21 points or more and twice by more than 30.

Here's the entire rundown of dominance:

The Sweet Sixteen gets a Savory Sixteen

Florida still looks like a slight favorite to cut the nets. But Arizona is gaining as Louisville loses steam.

The Sweet Sixteen gets a Savory Sixteen

After the first 12 games of the season, Michigan was 8-4, on the verge of falling out of the top 25 and about to lose preseason first team All-American Mitch McGary for the rest of the year. The Wolverines then surprised everyone by winning 10 in a row and eventually claiming their first outright Big Ten regular-season title since 1986. They're now just two wins away from making the Final Four in back-to-back seasons for the first time since the Fab Five pulled the feat in 1992 and '93.

The number of Connecticut's Shabazz Napier, who might be more valuable to his team than any other player still standing. Playing with an injured shin, the AAC Player of the Year scored 25 points in 25 minutes, including 21 in the second half, to will the Huskies to victory over second-seeded Villanova last weekend. 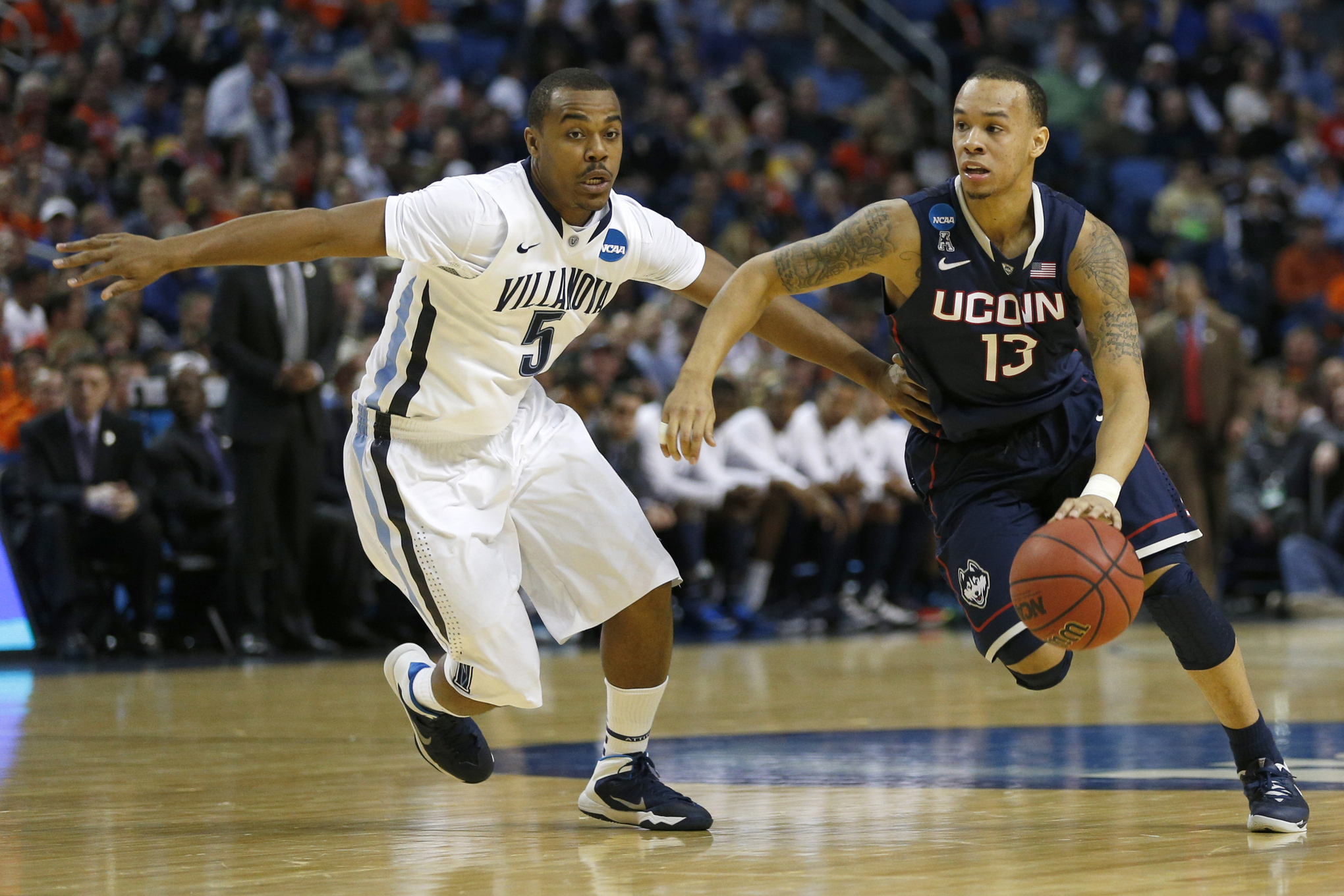 The number of years it's been since Iowa State's last Sweet 16 appearance. The Cyclones are also one of the four teams left that have never played in the national championship game. Virginia, San Diego State and Tennessee are the others.

The advantage owned by No. 1 seeds in their all-time series with No. 4 seeds. The Sweet 16 matchup has occurred 43 times since the expansion of the NCAA Tournament, with the top seeds owning a 29-14 mark. Three more games will be added to the series history over the next two days with Virginia taking on Michigan State, Arizona facing San Diego State and Florida going up against UCLA.

This will be the 16th class of four-year players that Tom Izzo has coached at Michigan State. None of the previous 15 left East Lansing without going to at least one Final Four. It's on Adreian Payne, Keith Appling and company to keep that incredible streak alive.