The Wildcats and Badgers square off in the late game, but up first it's Billy Donovan's Gators taking on Archie Miller's Flyers.

Two teams will march on to the Final Four on Saturday night. Two others will have their seasons tragically come to a close in the blink of an eye. Here is a preview of both Elite Eight games. 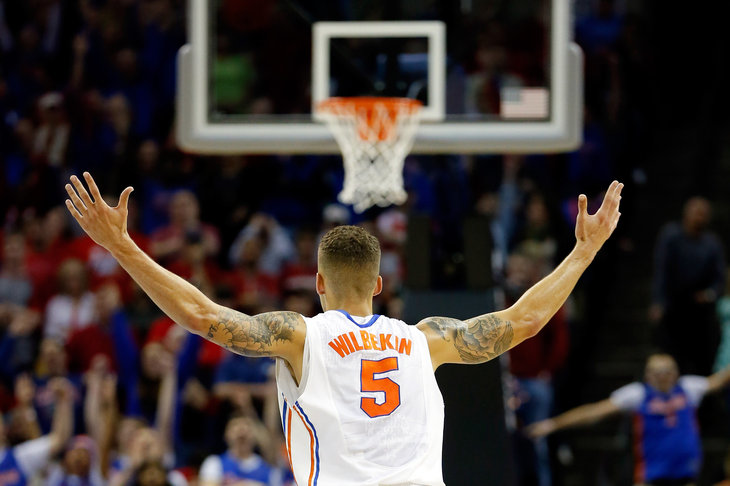 It may be cliché at this point, but this truly is as much of a David vs. Goliath showdown as we've seen in March so far.

The Gators are the tournament's top overall seed and have won 29 games in a row. Florida has won two national championships in the last decade, reached the Elite Eight in each of the last four years and has a roster stocked with NBA talent.

Dayton, on the other hand, has been to one Final Four in school history, and it came in 1967. Head coach Archie Miller had never won an NCAA Tournament game before 10 days ago. There may be an NBA player or two one day, but this is a true team in every sense of the word.

This game could have the makings of an all-time classic. Arizona is rated as the top defensive team in the country, and only three times all season long has the defense surrendered more than 70 points to an opponent. Wisconsin's offense ranks fourth nationally in efficiency. Something will have to give in Anaheim.

There are a handful of matchups to keep an eye on. When Arizona has the ball, how do the Badgers try to contain freshman stars Aaron Gordon and Rondae Hollis-Jefferson? Gordon and Hollis-Jefferson form arguably the nation's most athletic frontcourt alongside center Kaleb Tarczewski, and both are averaging upwards of 15 points and five rebounds in the Big Dance. The Badgers don't have the athletes to keep them contained for long.

Wisconsin's biggest advantage could be Frank Kaminsky. He can hit shots from all over the floor, and Tarczewski is a foul machine when he has to guard players outside of the paint. Frank The Tank tore up Baylor, and he seems primed for another big game against the Wildcats. Do not be surprised if UA tries to go small at times and puts Gordon on Kaminsky.