The Sweet 16 ended in style with four entertaining games, three of which came down to the final seconds. In the end, Michigan State, Michigan, Kentucky and Connecticut punched their tickets to the Elite 8. 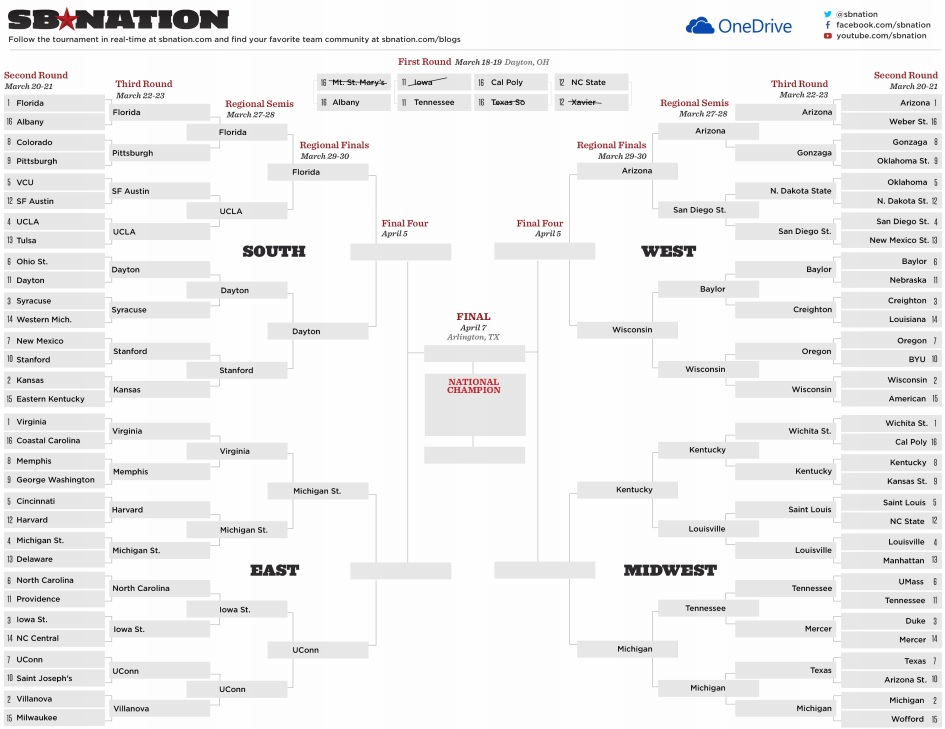 The Wolverines were in control for most of the game, but were an offensive foul call away from potentially blowing a 15-point second-half lead. Tennessee mounted a wild rally during the final four minutes of the game, cutting a 10-point lead down to one. Its effort was aided by some major blunders by the Wolverines. Leading by three, Michigan was unable to get the ball in bounds safely, leading to a Tennessee layup.

The Wolverines turned it over again on the ensuing inbound play, giving Tennessee the ball back with 10 seconds to play. Trailing by one, the Volunteers had an opportunity to take the lead and possibly steal a win. That thought was short-lived, however, as Jarnell Stokes was called for an offensive foul.

Michigan had more problems getting the ball in, but were eventually successful. Tennessee had one final chance, but Jordan McRae's three-quarters court shot was off the mark and came after the clock expired. Michigan survived by the thinnest of margins despite making 11-of-20 three-point attempts and shooting 55.1 percent from the field. The Wolverines were led by the frontcourt combination of Jordan Morgan and Glenn Robinson III. The two combined to score 28 points on 12-of-17 shooting. McRae scored 24 points in the losing effort.

Iowa State rallied late, but it wasn't enough to seriously threaten the Huskies who went up early and led for most of the game. The Huskies built a healthy lead, going up by as many as 17 points thanks largely to the offensive combination of Shabazz Napier and Ryan Boatright. The pair carried Uconn early, and combined for 35 points. DeAndre Daniels was also huge for the Huskies, finishing with 27 points and 10 rebounds. He added two blocks including one highlight-reel swat.

A Daniels three put Uconn up 17 with less than 15 minutes to play, but Iowa State wouldn't go away that easy. The Cyclones slowly chipped away at the lead, eventually pulling within four at 67-63. The Huskies responded right back with a Niels Griffey three-pointer and Iowa State never got closer than five. Dustin Hogue nearly single-handily kept Iowa State in the game. He finished with 34 points on 15-of-19 shooting.

That effort wasn't enough, however, as UConn excelled at the free throw line to seal the win. The Huskies made 20-of-22 free throws.

The Wildcats and Cardinal added another chapter to their rivalry history book with the Kentucky rallying to pull the upset. Louisville went up double-digits early and it appeared the Cardinal were going to roll into the Elite 8, but once Kentucky settled it, it was a different ball game. The Cardinal maintained a slight advantage through most of the game, even going up by seven late in the second half. Every time the Cardinal made a run, however, the Wildcats answered with a surge of their own.

The game was tied 66-66 with less than 1:30 to go and it was the Wildcats who made the final push. Alex Poythress made a few huge plays on both ends during the final minutes and Aaron Harrison gave Kentucky the lead for good when he buried a three from the corner with 40 seconds to play.

Russ Smith had a chance to tie the game for Louisville in the final seconds, but his three-point attempt rimmed off. Kentucky grabbed the board and sealed the game for good at the free throw line. The Wildcats will advance to face Michigan.

The two defensive-minded teams slugged it out in what turned out to be an intensely competitive game. Outside of an early surge by Michigan State, which the Spartans went up 10, the teams played most of the game within five points of each other. The Spartans went up seven, 51-44, only to have Virginia go on a 7-0 run to tie the game with 1:53 to play. Michigan State called a timeout on the ensuing possession and Adreian Payne hit a clutch three-pointer to put the Spartans back on top.

Payne finished with 16 points while Branden Dawson led the Spartans with 24 points on 9-of-16 shooting. The combo scored seven of Michigan State's final 10 points. While the Spartans did all they could to put the Cavaliers away, Virginia refused to go down. Malcolm Brogdon hit a three with two seconds to play to pull the Cavs within one. It was a little too little, a little too late as Justin Anderson's full-court desperation heave didn't come close and the Spartans celebrated.

Brogdon and Joe Harris each scored 17 points for Virginia. Gary Harris scored just six points for Michigan State, but two of them came in impressive fashion.