The precursor to March Madness is approximately as mad. Let us guide you around the smaller, less beloved brackets of this haywire fortnight, so that you may taste all the regional flavors.

Share All sharing options for: Onions! IT'S CONFERENCE TOURNEY TIME

The best month in sports starts not with a bang, but with 31 small bang-like sounds played across the country in relative anonymity.

March Madness is the gawd. It's a hedonistic binge of exciting, important sports. It probably isn't the most accurate way to decide a sport's champion, but the insanity just makes it more brilliant.

There's a stigma with shelter dogs, but the transition to owning Laz was nearly perfect. In addition to being adorable, I found almost immediately that she was sociable, quick to learn, and most importantly, healthy.Or, at least she was until the last two weeks. During that time, she has thrown up nearly every day. She had thrown up before, but only sporadically, and now it has become a routine. I love her very much, and I am rather concerned.

My point is: my dog was young and appeared awesome in every way imaginable, until the last two weeks, when she began throwing up constantly. My dog is the Kentucky Wildcats.

I think my dog has the talent to pull through, but I'm not sure I feel the same way about Kentucky. Maybe we put too much faith in the abilities of dudes we'd never seen play. Maybe John Calipari is less a spectacular talent developer and more a guy who, by virtue of superb recruiting, has looked good due to the already-existing talents of some preposterously good college basketball players. Maybe both?

Either way, Kentucky doesn't have shooters, and its interior players are struggling to put the ball in the hoop. As a result, any team that plays a modicum of interior defense has a shot against The Team That Was Supposed To Go 40-0.

As always, we provide compensation for your time and attention via pictures of my dog, in a less vomit-y state. 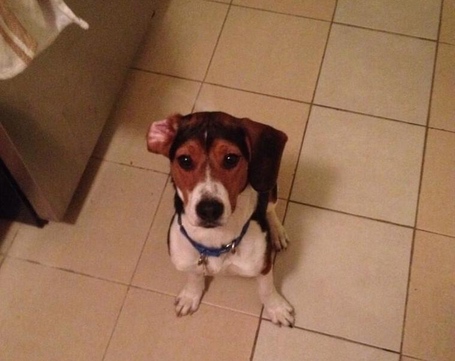 YOU try not giving her food.

But we often ignore its hyper little cousin: the two-week run of conference tournaments that starts tonight, with action in the Patriot League. We all know about the main course and are eager to feast. But yo, grab a jalapeno popper and a mozzarella stick and some wings. Conference tournaments are hors d'oeurves: tiny bursts of flavor, each tasty and individually distinct in its own way. And if you don't like hors d'oeurves, you can get the hell out of my face and die.

Conference tourneys are as haywire as the NCAA's -- both feature teams playing single games that will end their season -- except with more regional weirdness, and with teams that hate each other on account of having played before. And for teams in smaller leagues, this really is the big show: their goal is to go on a run and earn a spot in The Big Dance, where odds are assuredly not in their favor. What do you think they'll want to remember more in 20 years -- cutting down the nets with their team, or getting whooped by Arizona, trudging back to the locker room, and heading to the airport?

I am ALL ABOUT that conference tournament life, and will be posting daily Onions! dispatches as things get weird, and the world gets to learn about the tiny teams I've obsessed about since November. I'm hype.

But for now, a primer. We all know the NCAA Tournament's classic 64-team bracket, having filled out a trillion ourselves. We often forget that the bracket isn't quite as pretty: since it doesn't matter for office pool, we don't picture the bracket with four awkward extensions at random intervals, the add-ons that make a 64-team field into a 68-team field.

Conference tournaments are not created equal, and I'm not just talking about the differences in quality of play and atmosphere. I'm talking about the fact that some have regular brackets and some feature lumpy, deformed hodgepodges. So here is a quick guide to Conference Tournament brackets, monstrosities constructed for the sake of fairness. We think. 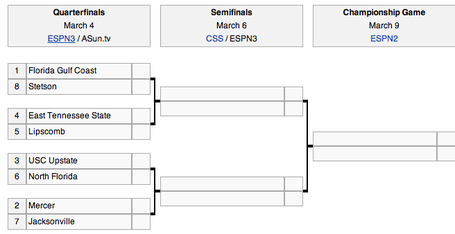 We clearly don't have the right amount of teams

Some conferences lop off last-place teams to kill two birds with one stone: doing this incentivizes regular-season performance, and most importantly, it makes for prettier brackets.

Some conferences, however, give zero craps about bracket aesthetics. Like a furious toddler playing with blocks that don't quite fit right, these conferences are determined to jam their entire membership into a bracket, no matter how weird it looks: 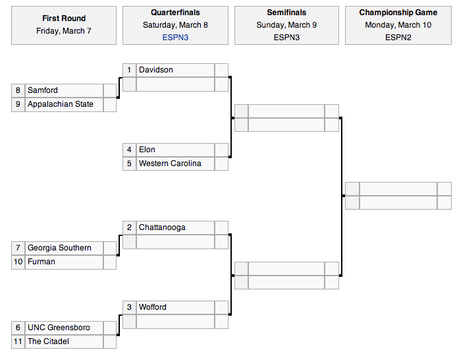 This is unwieldy. If you chopped down a cork tree and molded its wood into the shape of this bracket and threw it into a lake, it would keel over and sink in moments. (This joke required you to be familiar with the buoyancy of cork, which it's worth noting is very buoyant.)

Personally, we prefer this. Every team should get to go to their conference tourney. It just seems right, even if it looks weird.

For some, the problem is not having enough teams, like the Summit League: 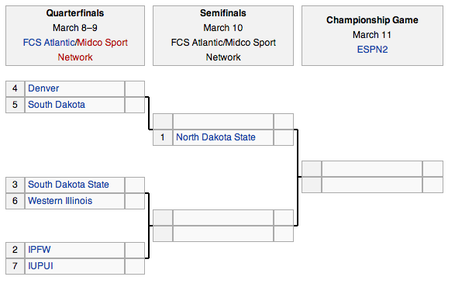 Awwwww, they're trying to have a real conference tournament. Just like the big boys.

The Weirdo Loser Award for Having A Stupid Bracket goes to the Big Sky. It's one thing to have a stupid-looking bracket, and it's another to exclude bad teams from your conference tourney, and the Big Sky manages to do both: 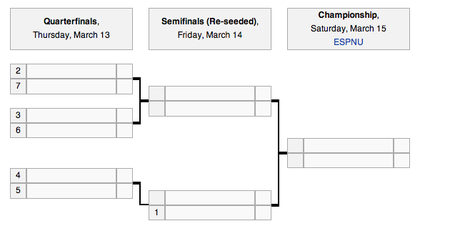 It looks sad and lonely like the Summit, but the problem here isn't a lack of teams: in fact, the Big Sky has 11 teams. They've chosen to have the four worst teams sit at home, leaving them with a seven-team field.

It would make oodles more sense for them to knock off the bottom three and have a legitimate-looking bracket, but they wanted a first-round bye for their top team, so we get this stupid-looking thing. It's especially a bummer since if the season ended today, four teams would be tied for 5th-through-8th, so some team could see its season end because of a complicated tiebreaker designed to cram an odd number of teams into this goofy-looking bracket.

If you're a small conference, you want your best team going to the NCAA Tournament, because that's your best chance at making noise. A good way to do this is by making your conference tournament exceptionally easy for your best team, like the OVC: 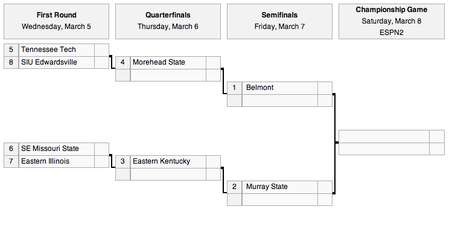 Tennessee Tech would have to run across a bed of nails that also happens to be on fire to make it to the semifinals, where Belmont is just relaxing drinking mai tais. The Southland also uses this format, which is good because Stephen F. Austin deserves to dance and nobody else from that conference does. The WCC used to use this to protect Gonzaga, but now has a more sensible-looking thing.

I would say that the Horizon League is drunk, but that's an insult to the things I do when I'm drunk: 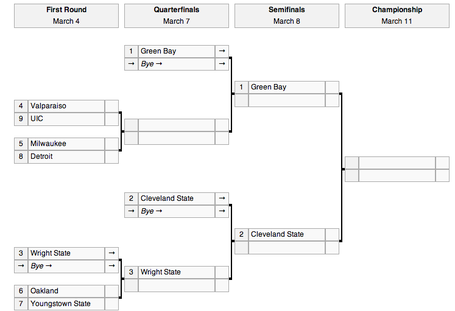 If you squint and stare at this, you can see where everything went wrong. They wanted it to be like the "make damn well sure our best team wins" brackets, but got stuck with nine teams. The result is three teams getting byes and two getting double byes. Could this have been solved by having a normal-ass bracket with the 8/9 squads playing each other? Sure. But instead, let's throw this abomination out there.

The Big South isn't that nuts of a bracket, but it has some terminology issues: 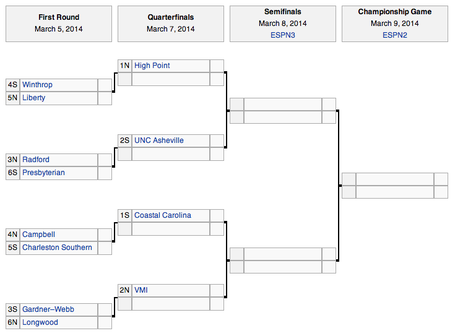 We will love your conference tournament, whether it is misshapen or regular. But we request a codex

The first day of stuff is pretty light -- the only conference tourney games today are first-round Patriot League matchups. So, the dregs of a modest-to-bad league. The Patriot League is great because AMERICA, but after pumping out Duke-upsetters Lehigh two years ago and a very solid Bucknell squad last year, no team from this conference is going to do much. But still. If these weren't the first conference tourney games and therefore the beginning of the precursor of March Madness, we wouldn't bat an eye.

Navy plays Colgate -- neither David Robinson nor Adonal Foyle is walking through that door, and if they were, well, advantage Navy. (This also serves as your annual reminder that Ed Dechellis left Penn State, a program hypothetically in one of the best basketball conferences in the nation, to be the head coach at Navy, which finished last in the Patriot League this year.) And Loyola Maryland, which is third on the Loyola power rankings behind Marymount and Chicago, takes on Lafayette, which is meh.