Everybody who has never made the NCAA Tournament, from Abilene Christian to Youngstown State. /shakes fist at the heavens for being a Northwestern fan

My college basketball dream is different than yours.

Yours involves ladders and scissors. Yours can be wrecked by an early tournament exit, or an upset at the hands of someone smaller.

Mine involves a single flash of a single word across CBS' screen. I merely want Northwestern, my team of choice, to make the NCAA Tournament. Anything that happened after would be gravy.

"I always joke with my wife, and I'm not sure I'm really joking, but I don't need to see them play an NCAA game," (Ex-Northwestern player/Big Ten Network announcer Shon) Morris said. "If I see the name 'Northwestern' come across the screen on Selection Sunday, I can get hit by a bus on Monday morning."

That quote is from an article posted on Yahoo! in 2008 when I was a freshman in college. It features a picture of a surprisingly brown-haired Bill Carmody, who was fired as Northwestern's coach last year. In the years following that article, the Wildcats have made the NIT four times -- more times than in the entirety of school history beforehand -- but they have always fallen a game or two short of the dance. It is now 2014, and barring the greatest conference tournament run in Big Ten history, we will be waiting for next year once again.

Since 2009, I've done a series of posts about teams that had never previously made the NCAA Tournament. I have seen these schools go on to do great things. In 2012, the lone school to make its first tourney was Norfolk State. Last year, the lone school was Florida Gulf Coast. I knew about them, and thus, I was like "hey! I know about them!" while everybody else was confused.

I've seen my friends tapped on the shoulder and called up, and yet I'm still here, sitting at basketball's kiddie table. I am draped in purple sack cloth, and I am prepared to be here in 2054, too.

Below is, so far as I can tell, the only comprehensive list of teams that have never made the NCAA Tournament. I believe there are 55 teams, but I am open to being corrected.

THE NEVER MADE THE TOURNEY CLUB

Some of these are already guaranteed to be back here next year for various reasons. I wrote last week about teams that, despite my mission to catch all 351 teams, I failed to watch this season. 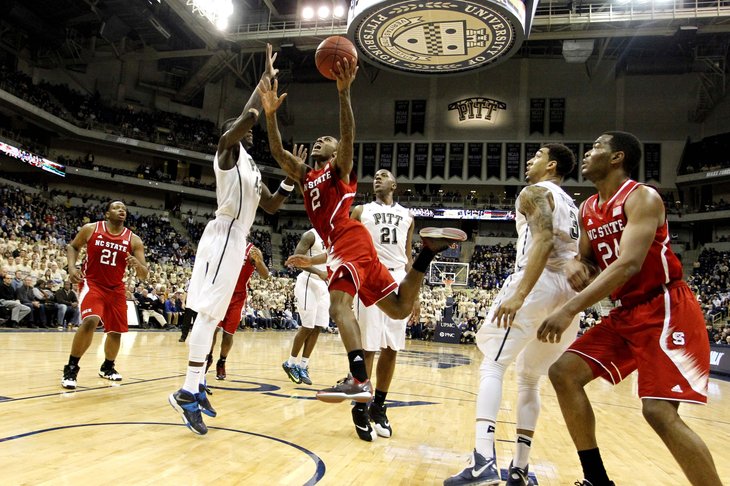 Transitioning schools -- Abilene Christian, Grand Canyon, Incarnate Word, Nebraska Omaha, Northern Kentucky, and UMass Lowell -- are already out. Independent NJIT, barring the least likely NCAA Selection Committee decision in the history of the world, is already out. Grambling is ineligible, although in a rare move, the NCAA is allowing the many ineligible SWAC teams to participate in their conference tournament due to a sheer lack of teams. Some schools -- as of right now, the only two that jump out are Kennesaw State in the Atlantic Sun and Sacred Heart in the NEC -- will not qualify for their conference tournaments.

But most of these schools are still in play to finally get their feet measured for dancing shoes, and we'll be tracking their progress. Some have particular reason to be excited:

This HBCU has rich hoops history -- Harold Hunter was the first black man to sign an NBA contract, Sam Jones of the Celtics is in the damn Hall of Fame -- but mainly while it was in D-II. It has not made the tourney since beginning the D-I transition in 2007-2008.

The Eagles are ranked No. 97. By comparison, then never-made-the-tourney brethren Norfolk State was 174th when it knocked off Mizzou as a 15-seed, and that team had soon-to-be-NBA'er Kyle O'Quinn. North Carolina Central's out-of-conference resume isn't insanely impressive -- it knocked off NC State and lost by 10-15 to Wichita State, Cincinnati and Maryland -- but it eviscerated the MEAC. The Eagles went 14-1 in-conference with 11 double-digit wins, and the season finale is still to come. NCCU failing to win the MEAC would be one of the bigger upsets of the conference tourney season.

Can UC-Irvine dip its disturbingly long proboscis into the Big West's anthill opening and come out with an NCAA Tournament bid? I don't know, but I just thought about having a four-foot long tongue meant for lapping up bugs and I need to sit indoors for a few years.

Irvine has the best two-point defense in the country, allowing opponents to make only 40.1 percent of their shots within the arch, and the reason is obvious: 7'6 Mamadou Ndiaye, who, trust me, is different than the 7'5 Mamadou N'diaye who played for Auburn before being drafted in the first round by the Mavericks. (Mamadou and N'diaye are common names in Senegal, a phenomenon none of us will understand until we move to Dakar and are repeatedly asked if we know the other Greg Johnson.) He is f'real 7'6:

Irvine's main threat is UC-Santa Barbara, who are led by Ken Pomeroy superstar Alan Williams. But the Gauchos' have been dancing five times, so they've had their share.

Somebody in The Summit, America East, or Atlantic Sun

The Shockers completed a 31-0 regular season slate this weekend, but the record alone doesn't give proper context to what Gregg Marshall's team accomplished.

GENTLEMEN! ARE YOU NOT TIRED OF BEING PASSED OVER!?!?! LOOKED DOWN UPON?!?!?! ARE YOU TIRED OF BEING PUSHED AROUND BY THE BIG BAD GUYS WHO ALWAYS WIN (in this case, Vermont and, like, South Dakota State) ARE YOU WILLING TO STAND UP AND FIGHT?

If not, don't sweat it. at least three of you from each league will be back here next year, and it won't be too much trouble for me to deal with a fourth. It's not worth getting worked up about.

So these are the 55 teams I'll have an eye on. Surely most of them will be back here next year, but presumably one or two will slip through, and we've found that teams that find their way in for the first time tend to make the most of it.

Re: yesterday's post about weird conference tournament formats: E Scott pointed out in the comments that I neglected to mention the NEC: 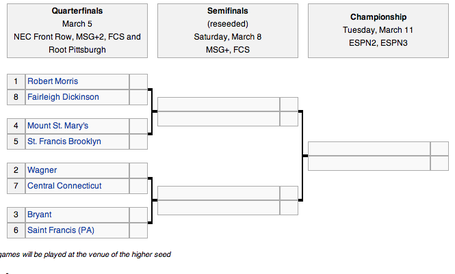 The NEC comes disguised as a normal-ass bracket, but reseeds after every round. Part of the fun of brackets is when things go wrong and teams end up where they aren't supposed to, ruining the concept that everything is mapped out to be as easy as possible for the top team. Reseeding autocorrects the potential mayhem by ensuring things will always be perfect for the league's best squads. It's especially disconcerting because the NEC already plays all tournament games at home sites, so top teams already have home court advantage going for them.

Here's to some 12/13 Round of 32 matchups in a few weeks, and to reveling in chaos rather than preventing it.

Nothing interesting: Colgate beat Navy, proving that our country's naval defenses can be overtaken by Raiders at a second's notice AND that Ed DeChellis is really bad at coaching, and Lafayette beat Loyola (MD), which I'm okay with, because to be honest, greyhounds kinda weird me out. Best of luck to our two remaining Loyolas.

Way better than Pacific Sun. One rises, the other sets.

I have rooting interests here: half of the squads in the bracket are Never Made The Tourney folks. All four games are at 7 p.m. ET on ESPN3, and if you're an insane person you'll quadbox them.

No. 1 FGCU vs. No. 8 Stetson: Y'all remember FGCU? Well, they earned the top seed this year. A decent amount of the gang is back, including dunkster Chase Fieler, but I'm rooting for Stetson on account of being named the Hatters, which is definitely a copyright violation. And they're Never-Made-The-Tourney.

No. 2 Mercer vs. No. 7 Jacksonville: Mercer, as James Pennington wrote here, is probably the team to beat in the tournament, but it's playing the Dolphins! Wheeee! This is a Dolphin shooting a basketball:

No. 4 East Tennessee State Buccaneers vs. No. 5 Lipscomb Bison: A comb for lips

The whole thing doesn't get underway tonight, just first-rounders trying to reach the quarterfinals. Games will be streaming at HorizonLeague.com:

No. 9 Illinois-Chicago Flames at No. 4 Valparaiso Crusaders, 8:05 p.m ET: The guy who hit that shot in the 90's now coaches Valparaiso!

No. 8 Detroit Titans at No. 5 Wisconsin-Milwaukee Panthers, 7 p.m. ET: Leading the way with 18.2 points per game for the Titans? 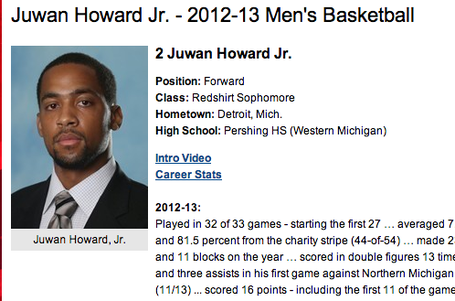 A lot of times, when we see the sons of athletes who in our minds were recently playing -- Tim Hardaway Jr., Glen Rice Jr., Glenn Robinson III, Trey Griffey -- we immediately say, "oh wow! We're so old!"

That is not the case with Juwan Howard, Jr. Juwan Howard having a son in college is expected. Our only shock is that Howard's son has not yet retired. 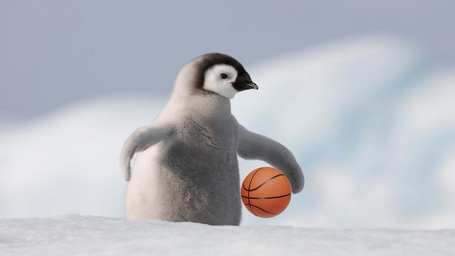 I love their tiny little mascot: 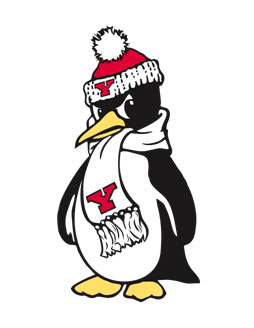 AWWWWWWW LOOK AT HOW ANGRY IN HIS LITTLE SCARF AND FUZZY HAT. PENGUINS DON'T NEED SCARVES AND FUZZY HATS THEY'RE ADAPTED TO SURVIVE IN COLD WEATHER BUT ITS STILL SO CUTE