After dropping their fourth game in their last five, the Orange are now residents of the three-seed line in Chris Dobbertean's Wednesday projection. At the other end of the bid picture, Baylor, Georgetown, Oregon and Providence all picked up crucial wins on Tuesday night, with three of those teams improving their position in the field of 68 as a result. 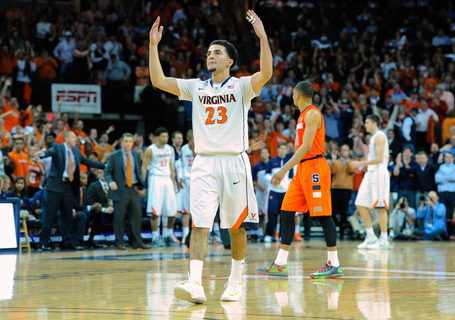 A wild weekend in college basketball has put this week's power rankings in flux with conference tournaments around the corner.

As a result of Syracuse's tumble, Virginia jumps up to the two line, though it's a very close call between the Cavaliers and newly-crowned Big Ten regular season champion Michigan; one that will undoubtedly sort itself out over the next week and a half. That inexplicable loss to Charlotte in Puerto Rico really hurts the Wolverines' case, even with their eight Top 50 wins.

Otherwise, yesterday's Top 16 remain in place for yet another day with Florida (South), Arizona (West), Wichita State (Midwest) and Kansas (East) leading the way. I'll have more bracket notes after the full projection and rundown.

On Tuesday night, Baylor just about locked up its place by pulling away from Iowa State late, and Oregon gained a bit of breathing room by handling Arizona State in Eugene. Georgetown crept closer to the field by knocking off Creighton, while Big East rival Providence improved its position slightly by taking out Marquette after a pair of overtimes.

I was tempted to drop Creighton, AKA "The Big East bubble team's best friend," a line after the Bluejays fell to Georgetown (a result that happened to hand the conference regular season title to Villanova, by the way). However, that Iowa State loss made me keep the status quo for another day.

I'll have a new bracketology post on Thursday morning, and with another hectic night on tap, expect to see more shuffling. In the meantime, head over to Blogging the Bracket for my daily TV previews and morning recaps, and follow me during each night's action on Twitter @ChrisDobbertean.