NCAA Tournament 2014: The best and worst of the first two weeks

There are just three games left to play in the 2013-14 college basketball season, and that should make you sad. To make you happier, let's look at how fun the 64 we just experienced were.

Share All sharing options for: NCAA Tournament 2014: The best and worst of the first two weeks

The craziest thing about the 2013-14 season is that we all keep refusing to admit that we don't have it figured out.

You'd think we all would have stopped by the time the brackets were announced on Selection Sunday, but of course, we did not. According to ESPN, 8.9 percent of the 6.1 million brackets submitted on ESPN.com this year had a Final Four of Michigan State, Florida, Louisville and Arizona, by far the most popular combination, and an abnormally high percentage. For reference, last year's most popular Final Four combination only accounted for 4.5% of all the network's brackets. So of course, that popular quartet proved to be only 25 percent accurate.

And now, as you might have guessed, everybody thinks they have the Final Four figured out: Florida will have no trouble beating Connecticut before going on to handle a resurgent Kentucky squad for the fourth time this season. Recent history says that even if you truly believe this scenario is going to play out, you probably shouldn't wager anything you can't afford to lose on it.

Before diving any more deeply into what we think will or will not happen this weekend in Dallas, it's important to look back at just how wrong we've already been and just how fun it was to see it all play out. So here's the best and worst of the two weeks that led us to this place.

You could really make a case for any of Kentucky's last three games to occupy this spot. The Michigan game had a better finish and the Louisville game a better comeback, but in terms of non-stop back-and-forth- for 40 minutes, I don't think you can beat UK-Wichita State so far. 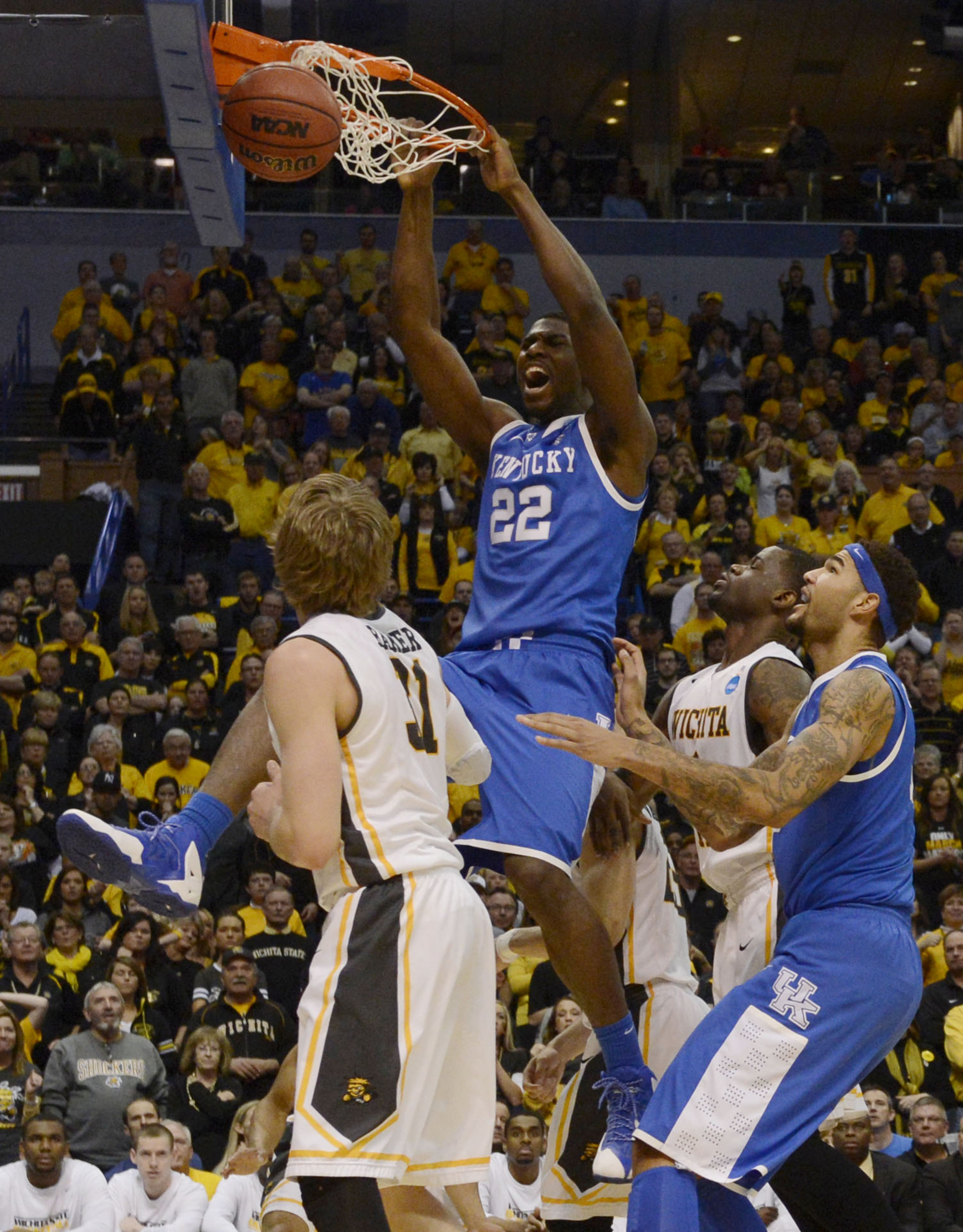 The game felt like a regional final from the opening tip to the final horn, as the 35-0 Shockers and the preseason No. 1 Wildcats traded blow after blow after blow until Fred VanVleet's final swing came up empty and Big Blue Nation could celebrate.

Cleanthony Early and Ron Baker were both tremendous in defeat, combining to score 51 points (Early had 31 alone) and hit 8-of-12 shots from beyond the arc. But the Harrison twins were up to the challenge, combining to score 39 points and hit five treys, the perfect accent to big man Julius Randle's 22nd double-double of the season.

The only disappointing thing about this remarkable contest is that it felt like it was played one Sunday too early. This wasn't fair to Wichita State, a 35-0 one seed that deserved better protection. I don't think there's one other eight or nine seed that keeps the Shockers from the Sweet 16, but now that's a part of their story that doesn't get to be told.

Again, this was the thriller with the superior ending, as Aaron Harrison drilled a deep three to break a 72-72 tie with 2.6 seconds left .

Michigan entered the game hoping to force the Wildcats into taking contested jumpers from inside the arc. That did not happen. In fact, Kentucky attempted exactly zero second half shots that didn't come from either outside the three-point line or inside the paint. UK used its significant size advantage to rebound 65 percent of its own misses, and seldom-used reserve Marcus Lee etched his name into Big Blue lore by dominating the middle for long stretches while playing in place of the injured Willie Cauley-Stein.
Big Ten Player of the Year Nik Stauskas, who scored a game-high 24 points, attempted to play hero at the buzzer, but his shot from just inside midcourt found nothing but backboard.
3. Stephen F. Austin 77, VCU 75 (OT) (South, Round of 64)

Stephen F. Austin had not lost since Nov. 23 heading into the tournament, and they were able to keep that remarkable streak alive for another two days thanks to one of the more insane comebacks in recent NCAA Tournament memory.

The Lumberjacks trailed for the bulk of the game's 40 minutes, including by 11 with seven minutes to play and a 65-59 deficit with just 56 ticks left. In what has become a bit of a theme in this tournament, VCU then missed four of its next five free-throws to leave the proverbial door ajar. Still, a Briante Weber freebie pushed the lead to four and made it a two possession game with 21 seconds to play.

Is that a foul? No, it's not. If you're seeing one it's only because you want to. But allow me to be the 8 billionth person to point out that JeQuan Lewis has no business challenging that shot in that manner in that situation. The only things that can come as a result of that act are negative, and what ended up happening to Lewis and his team was the absolute worst case scenario.

The teams traded big shots in the extra period before, in an especially cruel twist of fate, a wide open three-pointer from Lewis at the buzzer went wanting and SFA notched its 30th straight win.

The Badgers clinched their first trip to the Final Four of the Bo Ryan era and their first, period, since 2000 by knocking off top seed Arizona by a point in an overtime thriller.

Big Frank Kaminsky continued his tournament tear by scoring a game-high 28 points, including a three that put the Badgers ahead with 4:33 to play. With Wisconsin clinging to a 54-52 lead with under a minute to play, it was unexpected Arizona hero Rondae Hollis-Jefferson who slammed home a Nick Johnson airball to tie the game with 30.9 seconds left. 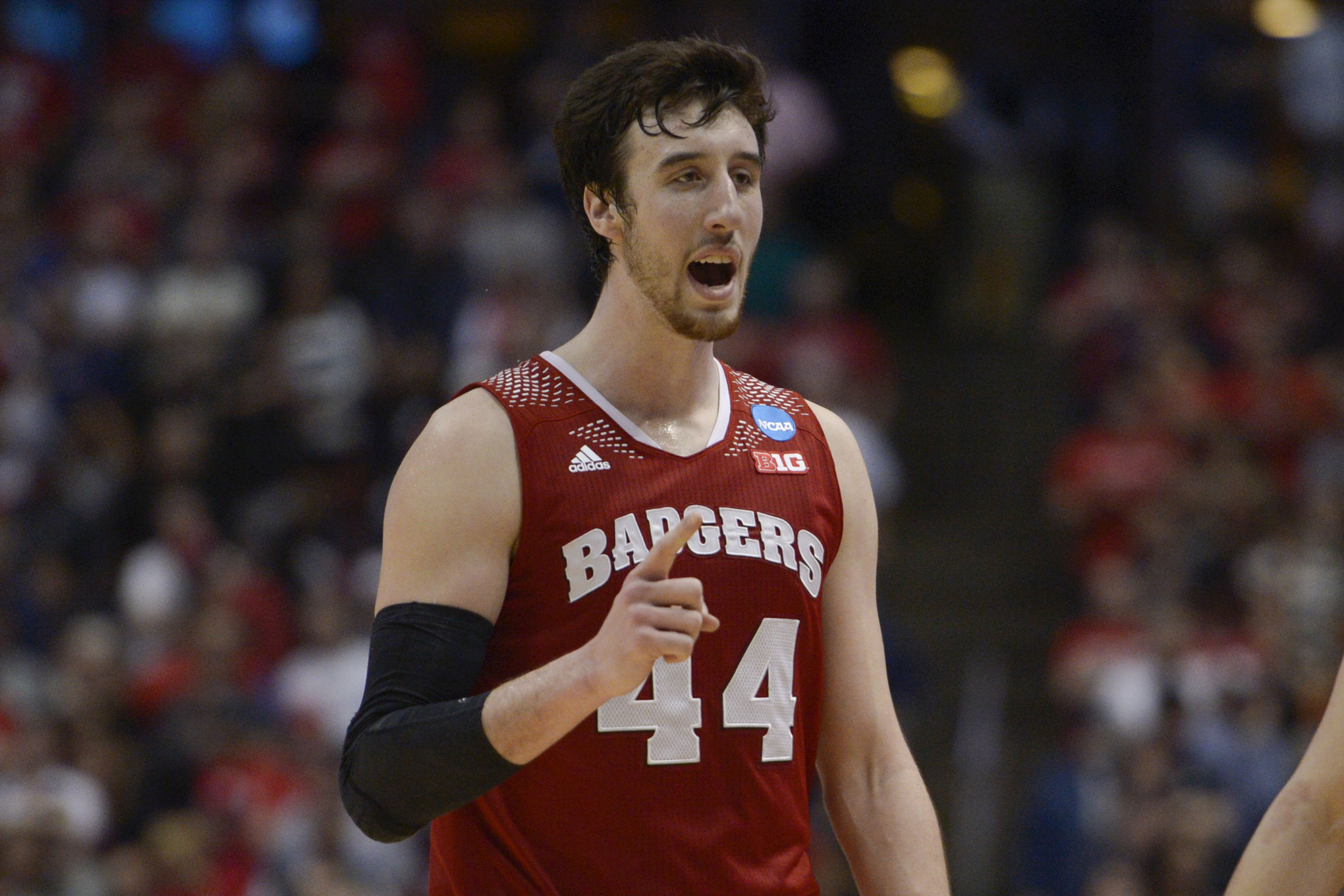 The game stayed tight during an extra period which included perhaps the most controversial call in a tournament loaded with them.

With the Wildcats trailing by one and less than 10 seconds to play, Johnson drove to the basket but was whistled for an offensive foul after extending his off-arm. A Wisconsin turnover on the succeeding inbounds play gave Johnson one more chance to send his team to the Final Four, but his potential game-winner was after the buzzer and off the mark.

Dayton advanced to the Sweet 16 for the first time since 1984 after knocking off a Syracuse team that seemingly yesterday was 25-0.

Tyler Ennis, the main catalyst to that 25-0 start and the player who became known for his late-game heroics after beating Pittsburgh at the buzzer in February, had a good look at a potential game-winning three-pointer at the buzzer, but found all iron.

"The thing that went through my head was the Pitt game," Dayton coach Archie Miller admitted after the game. "I saw that highlight on SportsCenter 7,000 times when he banged the three on Pitt."

Instead, Ennis simply capped off an evening where Syracuse failed to make a single three-pointer, finishing the game 0-10. The freshman guard made a few key plays down the stretch and finished with a team-high 19 points, but he was just 7-of-21 from the field.

Dyshawn Pierre, whose missed free-throw gave Ennis the opportunity to win the game, finished with 14 points for the Flyers, while Jordan Sibert chipped in 10.

It was beyond a rewarding evening for Dayton fans, who have consistently been ranked among the nation's top 25 in attendance despite supporting a team that hadn't made the tournament's second weekend in three decades. They Flyers, of course, would go on to beat Stanford before falling to Florida in the Elite 8.

There's no doubt as to who the Cinderella of the 2014 tournament will be remembered as. The Flyers became just the sixth 11th seed to crash the Elite 8, and the UD student body made sure to fully embrace its moment.

There's no better microcosm for this season than the Wildcats, who began the season ranked No. 1, underachieved for five months, earned an eight seed, and are now headed to the Final Four after making it out of one of the toughest regions in recent memory. Love them or hate them, there's no denying that UK is one of the most intriguing teams in recent memory.

From obvious blown calls to over-the-top monitor reviews to clock issues to total inconsistency on the new hand-check and charging rules; it has not been a pretty performance from the stripes over the last two weeks.

Perhaps the biggest bummer of the opening weekend was the news that Iowa State star forward Georges Niang broke his foot and was done for the rest of the NCAA Tournament. The Cyclones went on to beat North Carolina in the round of 32, but couldn't hang with Connecticut without him. Niang's final performance of the season included 24 points and six rebounds.

3. The Lack of Phil Martelli's Grandson After the Round of 64

Seriously, who didn't want more of this? 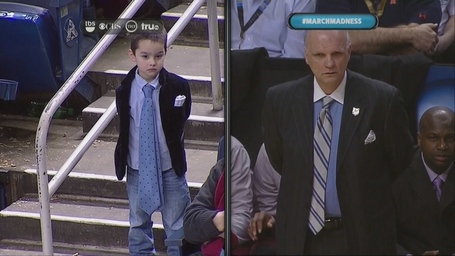 The tournament's leading scorer so far (23.3 ppg), Napier willed his team to four East Region victories and into the program's most unlikely Final Four appearance.

The West Regional MVP proved to be an almost-impossible matchup for all four of the teams the Badgers defeated, going for 19, 19 and 28 in Wisconsin's wins over Oregon, Baylor and Arizona.

Wilbekin has looked like the only guy capable of challenging Napier for the title of "best guard in the tournament" through two weeks, scoring 67 points, dishing out 12 assists and turning the ball over just twice in four games.

Julius Randle was named the MVP of the West Region, but the guy who has become Kentucky's Mr. Clutch gets our All-Tournament nod up to this point. He's scored 12 points or more in all four games, has hit 13-of-24 three-pointers, and followed up his corner dagger against Louisville with an unreal game-winner against Michigan.

He set an NCAA Tournament record for made free-throws without a miss (17) in the process of dropping 41 on Delaware, but couldn't find the touch when his team needed one last run against UConn in the Garden.

It came in the wake of the very first game on opening Thursday, but this from Hared Wickerham of Getty Images is still unlikely to be topped: 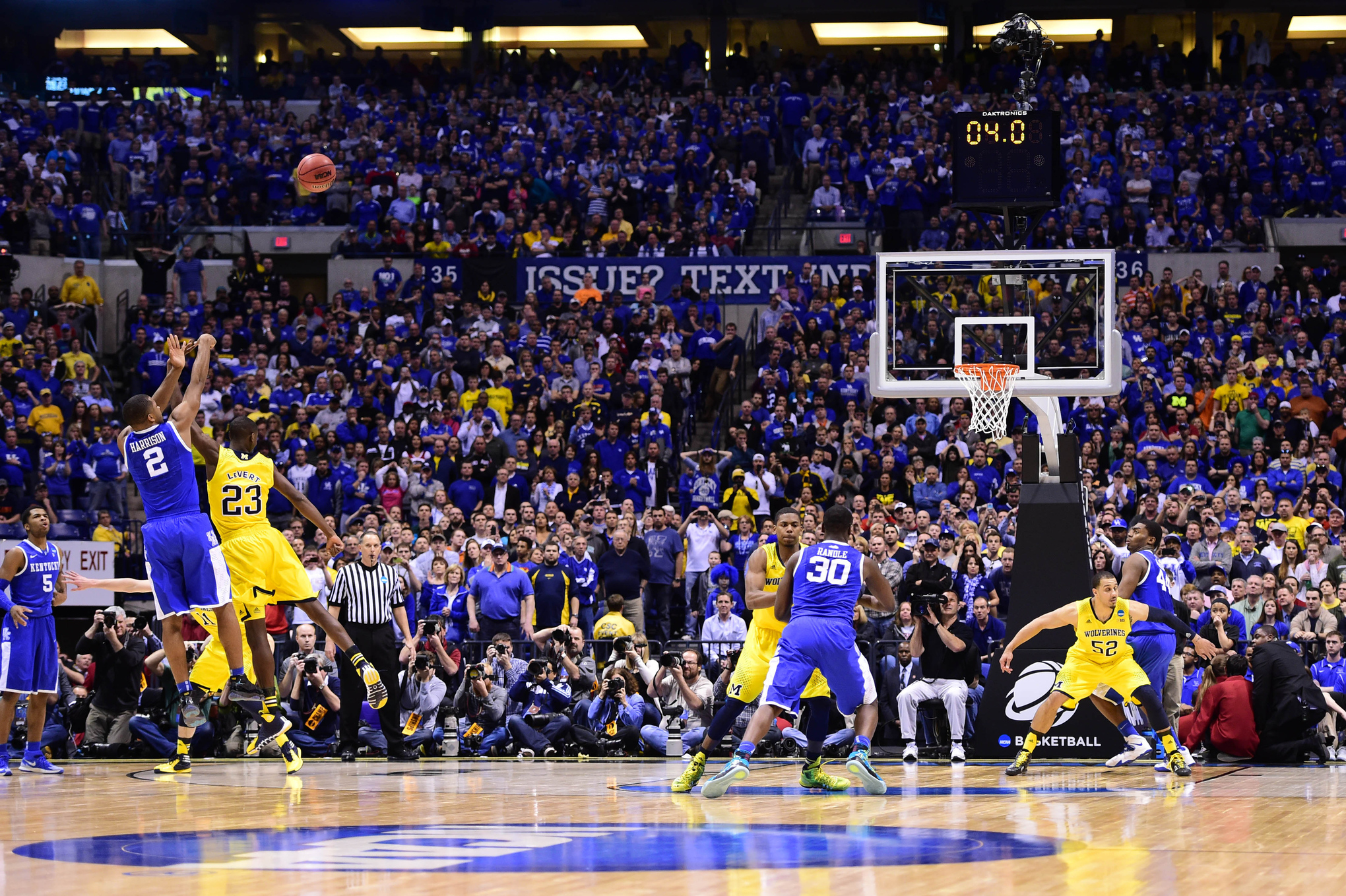 2. "We couldn't mess with the mojo. The best thing about Marty is that there isn't one thing you can point at that is his strength. He's good at everything you want a driver to do. We're glad he's with us down here." --Dayton Operations Director Eric Farrell on making sure the team had the same bus driver in Memphis that they did last week in Buffalo

3. "White guys." --Wisconsin's Frank Kaminsky after being asked how Arizona might describe his team

4. "It's only the greatest professional week of my life. I got to watch a group of guys that deserved it, who wanted it so bad, and made it a priority in their life and did everything I asked them to do. This season? Wow. Let's just say this: It's why I do what I do. And I lose the six guys out that door, Charles Barkley can make fun of me now, it's fine. Hey, I love these guys. Absolutely love them. Love 'em. I hope that comes close to answering it. Next question." --An emotional NDSU coach Saul Phillips after being asked what memories he would take away from his team's big week

5. "Man, we can be playing the grandmas of North Dakota ... this is the NCAA Tournament. I'd still be scared. Not necessarily scared, but I'd still be nervous and looking forward to playing them because it's the tournament. It's the top 64 teams in the country." --Kansas center Tarik Black on nerves and respecting opponents