The 64 best moments from the 2014 NCAA Tournament

Presented in absolutely no real order, relive the experience through photos, moving photos and short videos.

Share All sharing options for: The 64 best moments from the 2014 NCAA Tournament

The 2014 NCAA Tournament provided the world with plenty of memories as No. 7 Connecticut and No. 8 Kentucky busted virtually every bracket on the planet to make it to the title game. Once there, the veteran Connecticut squad exposed the youth of Kentucky to take home the NCAA championship.

A lot happened during the 67 games of the NCAA Tournament, so here is a bit of a highlight reel of some of the finer moments.

The Huskies are one year away from missing the tournament because of a low APR score. To redeem themselves, all they did was beat No. 2 Villanova, No. 3 Iowa State, No. 4 Michigan and No. 1 Florida en route to the title.

Mercer beats Duke, Nae Naes into hearts across the globe

The brilliant, simple play that won the game for Mercer

Basketball can often be a highly complicated game, but the Bears played it super simple on the most important possession of their win over Duke. Leading 65-63 and needing a basket to help put the game away, Mercer stuck with its high pick-and-roll, perfectly executed the play and extended its lead to four. It's the kind of late-game execution we didn't always see in the tournament.

It was an ugly sight.

It was the third time in school history that Ohio State lost in the first round of the tournament. In the most fitting fashion, Craft and company were the very first upset of the NCAA Tournament. The Internet responded as quickly as possible. 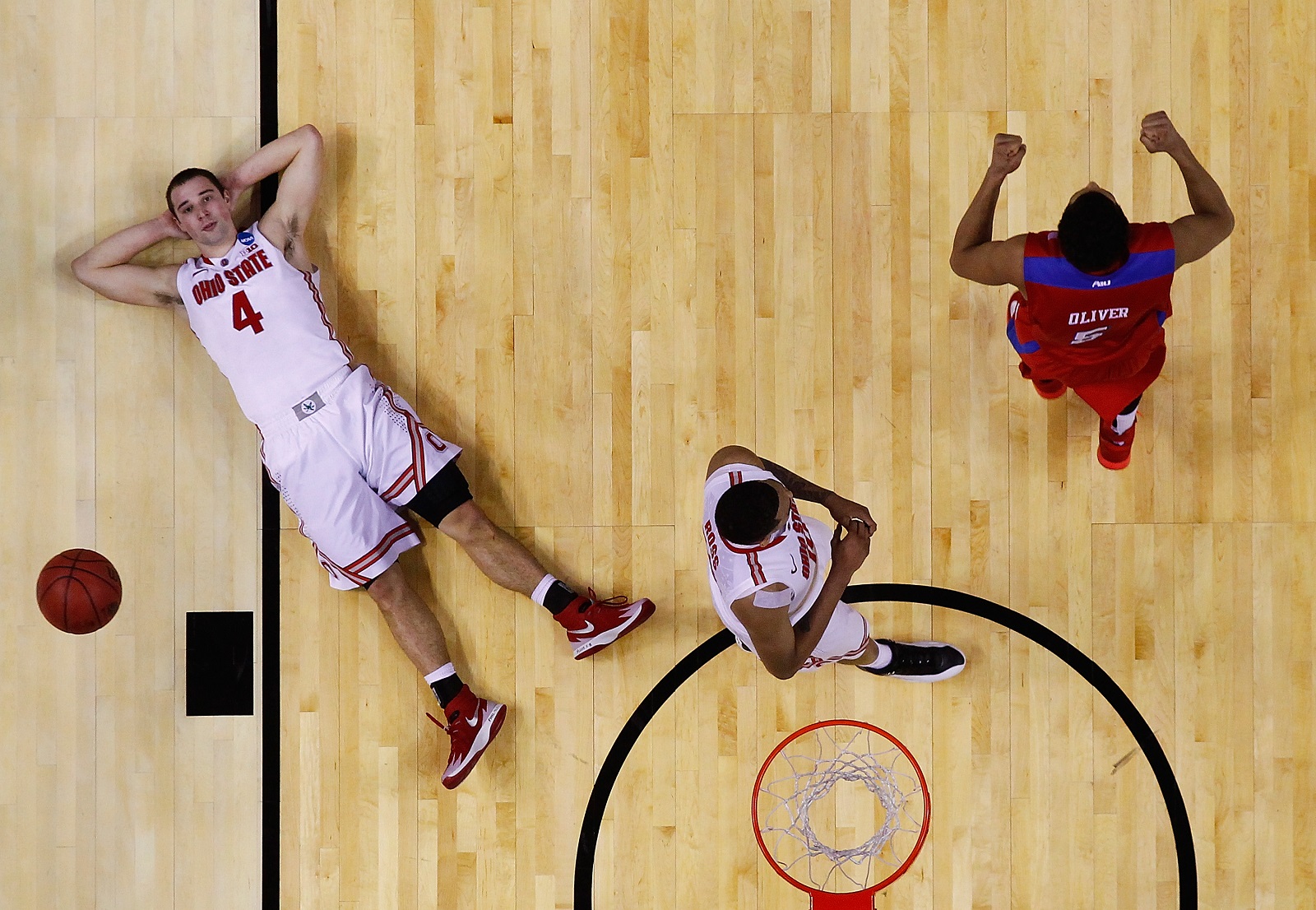 The three that gave Kentucky the permanent lead against Louisville.

A three at the buzzer to defeat Michigan and send Kentucky to the Final Four.

Kentucky-Louisville was everything we imagined it could be

The 74-69 thriller was a nice reminder that Kentucky really, really means business when it comes to college hoops. Check out Steven Godfrey's feature for more on basketball in the home of John Calipari and Rick Pitino.

Stanford upsets Kansas in the third round... 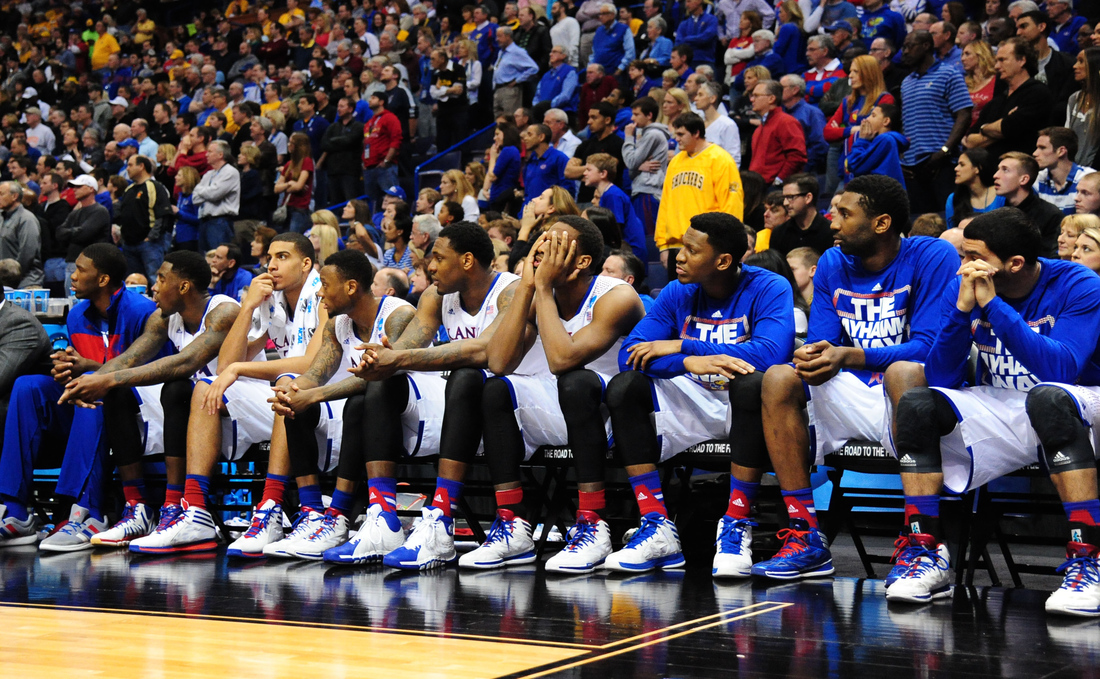 ... because of plays like this monster block from Josh Huestis:

Wayne Selden probably should have tried to dunk that one.

Saint Louis rallies from 16 down to win against N.C. State

The North Carolina State Wolfpack seemingly had the No. 12 over No. 5 upset set in stone, but they forgot to hit their free throws to close out the game. Saint Louis would rally from 16 down and win in overtime, ensuring that at least one No. 5 made it through the second round.

VCU held the lead with 6.7 seconds left. Then Desmond Haymon launched up a three, made the bucket and was called for the foul. He made his free-throw to force overtime, and Stephen F. Austin would end up pulling the upset.

And then Napier's threes rain on Michigan State, too.

See, there was a time when we didn't all know about Mr. Kaminsky. That has since passed, but the 7-footer scored a game-high 19 points against the Bears as part of his breakout tournament performance. WE SHOULD HAVE KNOWN WHAT WAS COMING.

This was the final shot of regulation. It was absurd. Wisconsin got out front in overtime and advanced to the Final Four for the first time since 2000.

It was a long time coming for Bo, and he showed it during the post-game interview. Really, though, how can you not love this guy?

Arizona State was all set to win, and looked even more like it would with Texas' final shot being so far off. But it was Texas' second to last shot. The Longhorns last shot won the game.

Sometimes the best human reactions are captured in the toughest moments. Example A:

Cleanthony Early throws down a massive dunk on Willie Cauley-Stein

Andrew Wiggins shows why he belongs in the NBA

Kansas made an early exit, which is a shame because it deprived the college world any more of Wiggins' highlight reels.

Here is the three hit to tie the game against Oklahoma. The Bison would eventually win in overtime.

Phillips gave the post-game interview of the tournament, placing a little bit of humanity into March Madness.

Seriously, it is impossible not to root for the Bison

And that other time Stauskas ALMOST dunked

Nooooooooooo you were so close!

Kentucky hands Wichita State its first loss of the season

The Shockers history-making season eventually had to come to a close.

They reportedly tried to smuggle alcohol into arenas via their tubas and also smuggled in the most overly-enthusiastic cowbell player in the nation.

While Stanford was in the process of upsetting Kansas in the round of 32, CBS heartlessly, and quite slowly, zoomed in on the bitter tears of a young Kansas fan.

Basically the whole campus headed joined in on the fun.

Drake is Kentucky's biggest fan because why not

American center shoots free throws with one hand because America 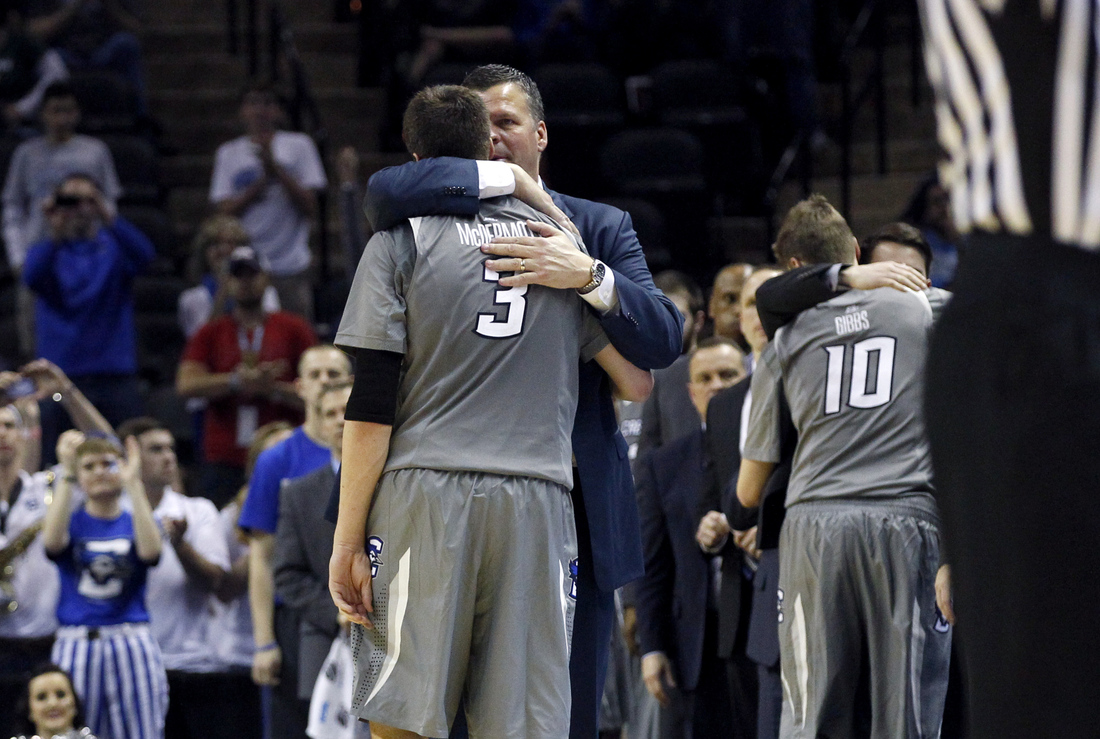 Because there is no better way to celebrate.

Dayton went as far into the NCAA Tournament as Ohio State was supposed to. The local paper took it, and ran with it.

Prior to this year, only one school has won both the men's and women's titles in the same year; Connecticut back in 2004. Nice way to celebrate the 10-year anniversary.

charles Barkley your belly looks tired, you should rest it on the desk. What's up Kenny clark and the legendary MR GUMBLE tell to brotha hi

UConn fan loses out on $100,000 because he forgot to pick UConn to win it all

That is just painful.

Kansas State picks up the most bizarre technical foul possible

NCAA folks, forever killing as much fun as possible.

Kansas State was accessed a Class B technical foul during warm-ups. UK will shoot two free throws prior to the jump ball.

Official word on K-State tech: You can't dunk once the pregame clocks goes below 20:00. Walk-on Brian Rohleder dunked at 19:58. Unreal.

The Wolverines were 14-for-28 from behind the arc in the win.

Patric Young saves his meanest mugs for the camera

Florida had no problem dismantling Pittsburgh in the second round thanks to plays like these.

Reminder: Kentucky fan @tizzblack got this tattoo before the tournament started pic.twitter.com/R4n9plmJfX

Michigan State losing in the Elite 8 surely disappointed some, but it also freed up the team's star big man for college basketball's Slam Dunk Contest. The end of March Madness in East Lansing was probably in the best interests of us all.

Mitch McGary loves all the three-pointers

The Wolverines couldn't get any help on the court from their injured big man, but he did his best to put in a good effort on the sideline:

This is when it's useful to have the ol' broom ready to go:

When Florida dunked all over Albany

Soooo many dunks! (Okay, the second one isn't a dunk.)

Pretty impressive win over the Bearcats. And hey, it's not like Crimson fans have anything else going for them, right?

Getting a second-round win for the second straight year was impressive enough, but after rallying from a 16-point deficit to take the lead over Michigan State in their next game, it seemed like the Crimson had a shot at taking their success to another level.

Alas, the Spartans' talent won out, with Branden Dawson scoring 26 points to lead MSU's 80-73 win. But it was another strong performance by Harvard, which continues its ascendance under head coach Tommy Amaker.

Pittsburgh showing up the Buffaloes with 29-point blowout

The Panthers led 13-0 minutes into the game, extended that lead to 30-7 during the first half and simply cruised to victory from there. Colorado, it seems, did not have its ideal experience at the NCAA Tournament in 2014:

Colorado still isn’t out on the court with 2:45 left before the 2nd half starts. Maybe they went home?

We never like to celebrate when an athlete can't play due to injury, but at least the Kentucky big man could show his fashionable side on the sideline: 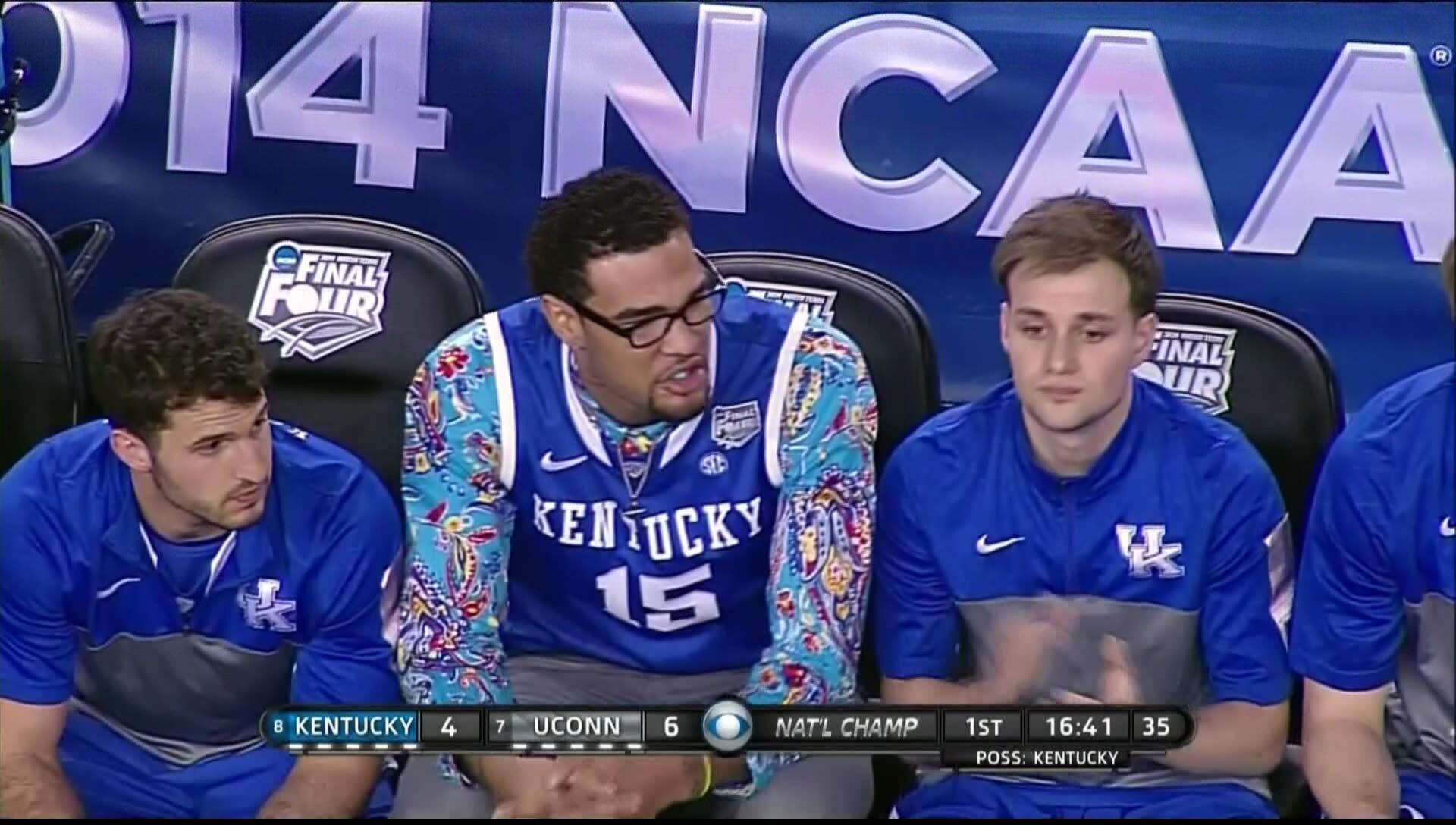 The sophomore wing out of Wisconsin had scored in double-figures just once since mid-December, but with the Ducks needing someone to step up in their opening game against BYU, it was Cook to star. Playing 23 minutes -- his most in over two months -- Cook poured in 23 points on 8-of-9 shooting to help carry Oregon.

Sim Bhullar is the starting center for New Mexico State. He is a very, very large human being, who also happens to dunk basketballs:

This didn't even come after a basket by his own brother:

Albany topping Mount St. Mary's to tip off the tourney

By the time the Final Four has rolled around, we've mostly forgotten about those mid-major teams who were so excited to reach the NCAAs in the first place, but Albany and Mount St. Mary's still played a good one to kick off the 2014 tournament. As we would later see, the 71-64 game was a sign of good things to come.

San Diego State looked ready to hand Arizona a major upset in the Sweet 16 before Pac-12 Player of the Year Nick Johnson came alive late. He scored all 15 of his points in the final three minutes, powering the Wildcats to a 70-64 victory and an Elite 8 appearance.

Following in the footsteps of Kemba Walker, leading his team to an unlikely national championship, could it be anyone else? Napier scored 22 points in UConn's championship game victory over Kentucky, and as you've seen in this post, his earlier games were full of exciting, game-changing plays. He was a no-brainer to win the tournament's top award.