The sad state of DePaul basketball: Can the Blue Demons ever recapture Chicago?

DePaul basketball has nowhere to go but up. That's supposed to be the good news.

Share All sharing options for: The sad state of DePaul basketball: Can the Blue Demons ever recapture Chicago?

Numbers rarely tell the full story, but in the case of DePaul basketball, a few numbers can go a long ways toward painting a pale, lifeless image of complete despair. Case in point:

It's hard to know when you've hit rock bottom when every season feels like a new low, each loss registers as a formality and one local recruit after another chooses to spend their college years outside of Chicago. As DePaul continues to sink, few in the city even bother to notice. It wasn't always this way.

UConn's victory over the NCAA

The Huskies defeated Kentucky on Monday night in North Texas to win their fourth title in 15 years, but it was the boldness of their words that might have been even more impressive.

UConn's victory over the NCAA

From 1976-1992, DePaul made the NCAA Tournament 14 times in 17 years. Ray Meyer's team made it to the Final Four in 1979 behind future No. 1 overall draft pick Mark Aguirre before falling to Indiana State by two. Larry Bird finished with 35 points, 16 rebounds and nine assists, and DePaul hasn't been back since.

This was the heyday of DePaul basketball, when it was able to harvest talent from Chicago's booming public league and use it to create one of the most consistently powerful private basketball programs in the country. DePaul hit No. 1 in the AP Poll in both 1980 and 1981; it would get as high as No. 2 in 1982, 1984 and 1985.

Now DePaul hasn't been ranked since 2001. They've made only two NCAA Tournament appearances in the new millennium. They haven't reached a Sweet 16 since 1987. The only real resurgence came in 1998 when DePaul was finally able to again secure some of the city's top talent with a homegrown freshman trio of Whitney Young's Quentin Richardson, Simeon's Bobby Simmons and Julian's Lance Williams.

The 2000 team that lost in the first round of the tournament actually had four future NBA players on the roster, with Richardson, Simmons, Hunter and Paul McPherson, the high-flying shooting guard who doubled as the closest thing Chicago had to Vince Carter.

Even with Richardson and Simmons both hanging around the NBA for over a decade, the Blue Demons were never able to use it to their advantage as a recruiting tool. At this point, it feels like the top recruits in Chicago throw DePaul in their top five just to be nice. Derrick Rose, Jabari Parker and Jahlil Okafor aren't coming to play for Purnell. Why would they?

The thing is, DePaul doesn't even need the big-time recruits they never had a chance with in the first place to turn into a national power again. There's plenty of talent around Chicago to go around. They just need to find it.

Maybe it registered when freshmen Kendall Pollard and Kyle Davis were logging minutes in Dayton's upset of No. 6 Ohio State in the round of 64, playing for a team that would eventually make the Elite 8. Maybe it didn't hit you until Ben Brust and Frank Kaminsky were out-gunning top-seeded Arizona. Perhaps you had to wait to see Ryan Boatright kill Kentucky with crossovers and pull-up jumpers in the national championship game.

The logical end to a beautifully insane season

For five months, we were all wrong about everything. So why did anyone expect the season's last three days to be anything different?

The logical end to a beautifully insane season

If you have followed Chicago basketball long enough, eventually you couldn't miss all of the local players in the 2014 NCAA Tournament. While DePaul keeps focusing on future NBA stars like Parker and Okafor, they're missing out on a lot of players from their home city who could remake the program in a year or two. Chicago's basketball talent is that deep.

The construction of a new stadium in the South Loop will help DePaul, but it isn't coming without plenty of opposition.

Last May, Mayor Rahm Emanuel announced a proposal for a $173 million arena near McCormick Place, just south of Chicago's downtown area. The majority of the money was raised through the Metropolitan Pier and Exposition Authority with the sale of bonds. That money was always ticketed for expansion projects around McCormick Place, and it couldn't be used anywhere else. The timing of the announcement is what killed Emanuel and DePaul from a PR perspective.

Six days before the plan for the arena was announced, the city closed 50 public schools thanks to a $1 billion deficit. Critics of the arena were not hard to find.

"This project could not be worse for human priorities," said Bob Fioretti, the alderman of the ward that would house the arena. "We can’t afford neighborhood schools, but we can bankroll an unnecessary basketball arena for a private university?"

Even when DePaul wins, it still loses. The money raised for the McCormick Place expansion never could have been used to fix schools or other infrastructure, but no one seemed to notice. It's not like Chicago has the most open and honest history with local politics, anyway.

The arena aims to be open for the 2016-17 season, but few are particularly happy about it, and that includes DePaul's own students. For all of the controversy surrounding the arena, it should help the program.

Now, DePaul plays its home games at Allstate Arena in Rosemont, a good 25-minute drive down the highway from the university's beautiful campus in the Lincoln Park neighborhood. If DePaul had an arena in Lincoln Park, it's easy to see them becoming one of the best programs in the country. There's just no space or no money for it no matter how many locations seem like they would work. At least with the South Loop stadium, DePaul will be able to take recruits through the city to get to the arena instead of out of the city and into the suburbs. 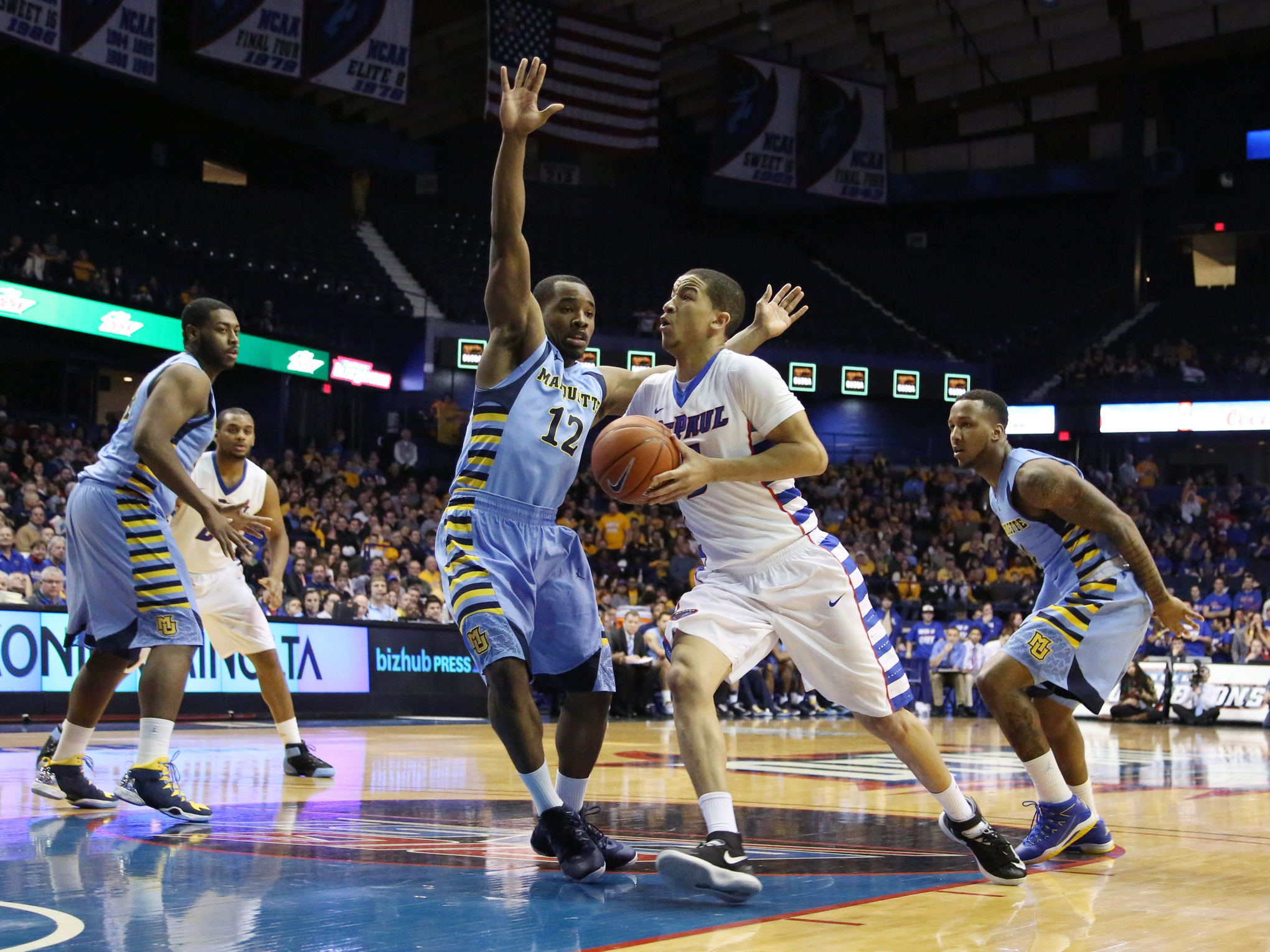 DePaul has one piece, at least, in freshman guard Billy Garrett Jr., the former Morgan Park star who was named Big East Rookie of the Year. Garrett is very good, but will he stick with the program throughout college, or choose to transfer?

Will the stadium be enough? Will Garrett's decision to stay home help convince others to do so? Can Chicago's strong basketball culture at the high school and professional levels finally find a place for a college team within the city? It's hard to say, but at least DePaul can take solace in things not being able to get much worse. Losses and apathy around the program are already maxed out. There's nowhere to go but up.