The lessons of Princess Lacey

What one 8-year-old who lost her battle with cancer taught us about ourselves.

Share All sharing options for: The lessons of Princess Lacey

Love like Lacey. Love unconditionally. The lessons of Lacey Holsworth.

Princess Lacey has achieved the ultimate victory. She now dances among angels.... The world is a better place because you were in it. Our hearts are broken. We love you Doll. Dance all night... Mommy and Daddy, Will, Mitchell, and Luke. #LoveLikeLacey

News that the beautiful blonde 8-year-old girl, who stole the heart of Michigan State basketball player Adreian Payne, then the Spartan family, then the nation, had passed away Wednesday morning in the arms of her parents came as a sudden shock. Wasn't she just courtside at Madison Square Garden, proclaiming that her personal "Superman" could lead her favorite team to the Final Four? Wasn't she just in Texas watching Adreian mesmerize at the slam dunk contest? But cancer moves frighteningly fast at times, and appearances of normalcy were really a show of her strength as the neuroblastoma worked inside her body to end her life. Though the disease appears to have won, that's the furthest thing from the truth.

Sometimes we make too much of sports. We act like the outcome speaks something of us, the ones on the sidelines hoping to be entertained. It's not the Spartans, or the Wolverines, or the Tigers, or the Lions. It's our schools, Michigan State and Michigan, it's our town, Detroit. It's your schools and towns, too. Los Angeles, New York, Boston, Auburn, LSU, Omaha. If your team wins, it speaks about you. We work hard here. We bring our lunch pails. We're blue collar. We're showtime. We overcome. Our way of life is best. Can't you see? Our team just smacked yours around pretty good, didn't it?

And sometimes story tellers try just a bit too hard to tie the outcome to the narrative. Here in Michigan we expect to hear the story of "Downtrodden Detroit" on a yearly basis. The Tigers are out there winning to raise the spirits of the once great bankrupt city, as if winning 11 games in October will heat cold homes and feed hungry stomachs. The Lions are winning? That will surely make people forget about the bills they can't pay, the jobs they can't keep, the families they can't hold together.

So the danger here lies in trying just a bit too hard to tie the story of Princess Lacey, Adreian and the Michigan State basketball team together in just a little too neat a bow, to make it a morality play. Would winning a national title have saved Lacey's life? Did her Spartans falling short to eventual-champion UConn crush her spirit? Not this girl. This girl battled a form of cancer that left her paralyzed at times. She loved her Spartans, win or lose. She loved Adreian, win or lose. And she loved life, despite the fact it had played a cruel joke on her, crippling her body. The Spartans lost, Adreian lost and she lost, but none of that matters, and the story is less about sports and more about life, because what she showed us was greater than any outcome. She showed us love, in its purest, in its most innocent, in its most perfect form. Love that was patient, love that was kind, love that did not boast -- OK, well maybe it boasted just a little bit. But Adreian is pretty good at basketball. You'd boast a little, too. 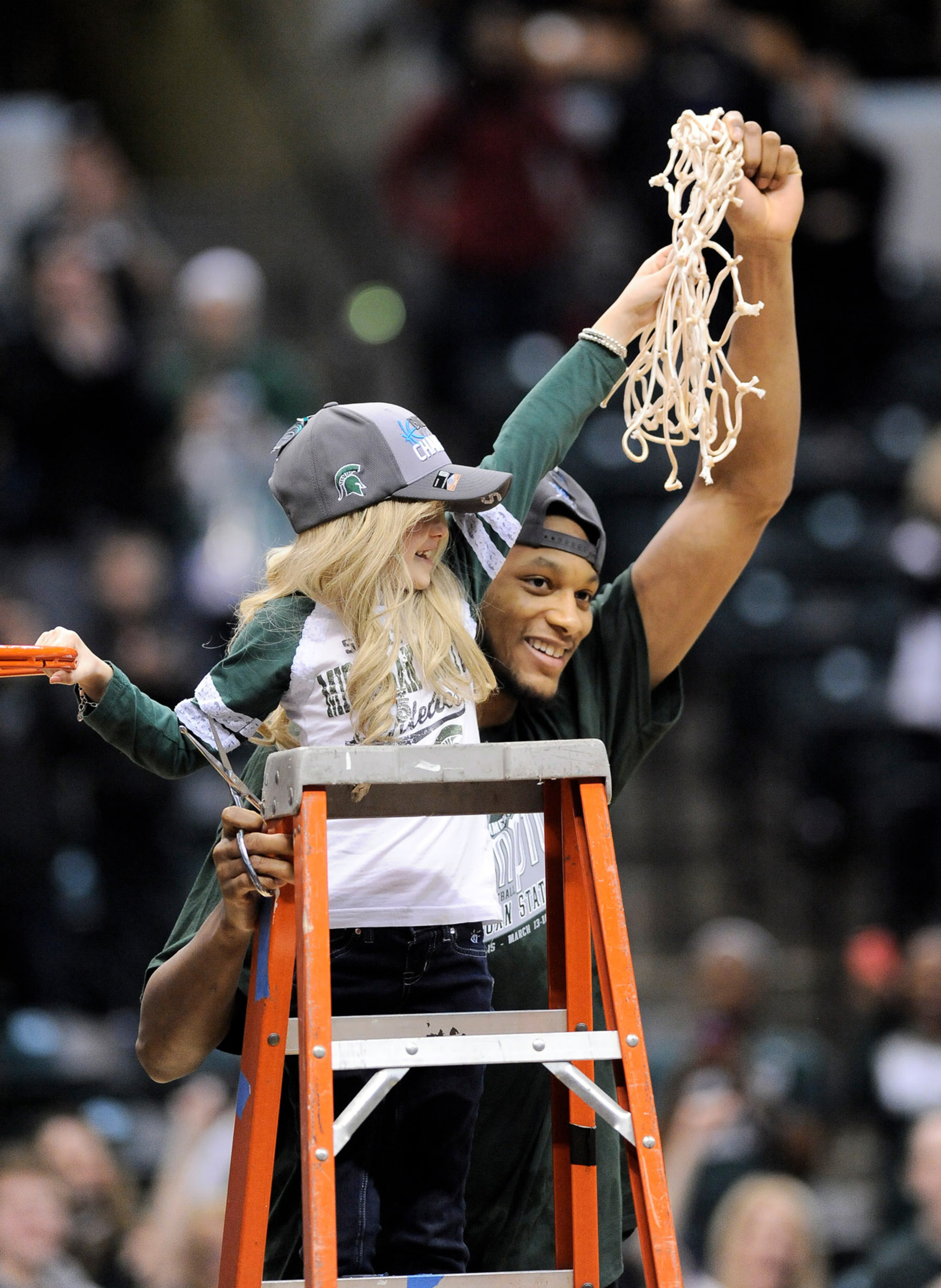 We can look at the photos of Adreian and Princess Lacey, on the court at senior night, cutting down the net at the Big Ten championship, or together in a hospital, and see the relationship that developed. He, the 6'10 basketball player out of Dayton, Ohio, and she, the little girl from the farm town of St. Johns, located a few miles north of Michigan State's campus. We can hear their story. He first visited her at Sparrow Hospital in Lansing in 2012 and they only grew closer from then. We don't have to ask about the details to know what made this relationship between athlete and child work. We could see it. Her parents say no matter how bad she felt, Lacey would light up in his presence. And Adreian? He can speak for himself about what it meant to him.

"Words can't express how much I already miss Lacey," Payne said in a statement released Wednesday. "She is my sister, and will always be a part of my life. She taught me how to fight through everything with a smile on my face even when things were going wrong. I'm a better man because of her. ... She said she first liked me because of my smile, but it's her smile that made America fall in love with her. ... I know she's smiling and dancing in heaven right now. My princess is now an angel."

All throughout the day Wednesday, tributes and memorials were proclaimed by rivals, celebrities and fans alike. Dick Vitale pledged to raise $250,000 in her name and said he'd give it all himself if he had to. As day turned to night, a gathering at The Rock on the Michigan State campus grew larger. Students and community members and university and athletic leaders all joining together to honor the legacy of one sweet little girl. "This will be the proudest night I stand before you," Michigan State coach Tom Izzo said. Not after a championship, not in an arena. But in celebrating a life cut short.

Kindness, perseverance, strength, joy, hope, faith, love, grace in a battle that can't be overcome. That's what brought everyone together. Those were the lessons of "Princess" Lacey Holsworth.