The winner of the dunk contest at the 2014 McDonald's All-American Game is a white kid going to Duke. What could go wrong?

Share All sharing options for: Duke commit Grayson Allen is the player you will love to hate

Meet Grayson Allen, a 6'4 shooting guard from Jacksonville Fla. He's going to Duke next year, and he already knows you're going to hate him.

"I think it's going to be a lot of fun," Allen said of the taunting he's expecting from opposing fans next season on Tuesday at the media session for the McDonald's All-American Game. "As far as me, I kind of take that as fuel. I had a little of that in high school, but I know it wasn't as extreme as it's going to be next year. It's always been fuel. I've never let it get to my head too much."

Thankfully, Allen is a smart and self-aware teenager who won't be surprised by what's coming his way once he arrives in Durham. He's next in a long line of talented white players at Duke who even casual college basketball fans can't seem to stand.

It's a lineage that started over 20 years ago with Christian Laettner and has continued with Steve Wojciechowski, Greg Paulus, Jon Scheyer and J.J. Redick. Redick probably got it the worst as one of the most reviled college athletes in recent memory. If Allen's experience is anything like what Redick had to deal with, the following is on the table:

If Duke ever travels to play a game in Philadelphia, Grayson Allen should stay home. When Redick's Duke team played at Temple, this is what he saw in the stands. 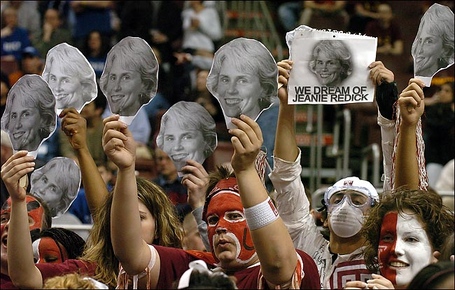 That's Redick's mom. This is what it's like to be a star white basketball player at Duke, and Grayson Allen has the talent to be good enough to hate.

Allen is a lifelong Duke fan and honor student. He was vice president of his high school class, he has a 4.4 GPA and he mostly uses Twitter to retweet girls who draw hearts around his face.

JUST LOOK AT HIM.

He's also probably going to be really, really good. Allen, the No. 20 recruit in the country according to ESPN, spent the first two practices for the McDonald's Game raining threes. He's considered one of the best shooters in his class. But on Monday night at the dunk contest, Allen proved his more than just a floor spacer.

Yeah, Allen went out and won the whole dang contest. First he jumped over two other All-Americans and threw down.

Then he jumped and dunked over his future teammate Jahlil Okafor, the 6'10 big man who is the centerpiece of Duke's recruiting class next season.

"For me, my decision to go to Duke was kind of a no-brainer in my eyes," Allen said on Tuesday. "When I was in 9th grade, I said that my dream school was Duke. I always wanted to go to Duke. When I was going through the recruiting process and it was becoming realistic, I kind of looked into it and thought it was a great fit. Off the court, academically, and then on the court, in that system and playing for one of the greatest coaches of all-time, I think it's going to be really big."

AND OH YES, THE SMACK TALK HAS ALREADY STARTED.

Theo Pinson, the UNC recruit who did the selfie dunk in the contest, said the three Tar Heel recruits at the McDonald's Game have been talking trash to the four Duke commits all week. When I asked him about his all-time favorite Duke vs. Carolina moment, he said Danny Green's dunk over Paulus in 2009:

That brought up the following exchange:

Me: "Do you want to do that to Grayson Allen next year?"

No person, especially not a teenager, should have to put up with the type of taunting Redick and other Duke stars have had to endure over the years. There's nothing cool about it, and it's more sad than funny. Hopefully Allen avoids it. But if you accept it as an inevitability — just look at how much joy Duke's loss to No. 13 Mercer in the first round of the NCAA Tournament brought the general public — at least Allen has the right outlook.

Besides, opposing fans never really hates bad basketball players. Brian Scalabrine can tell you the end-of-bench guys are usually among the fans' favorites.

To be truly loathed, you have to be awesome. Grayson Allen might just fulfill that criteria.