The NCAA is catching hell from the usual corners for the year-long -- and effectively career-ending -- suspension handed to Michigan center Mitch McGary after he tested positive for marijuana. It deserves it, and more. That's all on its way.

Consensus has a way of sneaking up on us. It's never as quick as it should be, and is never total -- as a nation, we're fairly close on Beyoncé and maybe a bit closer on pizza, but there are dissenters, as there should and must be. But seemingly impossible things have a way of receding toward possibility little by little, and then arriving all at once.

A decade ago, a presidential election was tipped by ballot referenda on gay marriage. This would not be the case in an election held today, and may well be unimaginable a decade from now. This is how hypocrisies melt. More germane to the case at hand: The moral arc of the universe is long, but it bends toward people not really giving a shit about pot anymore.

Of course, that fast-approaching consensus will arrive too late for Mitch McGary, the Michigan center who smoked a joint while inactive with a back injury, tested positive for it in March, and was handed a one-year suspension. He's heading into the NBA Draft, because the alternative is playing his next college basketball game in November of 2015.

Wiggins, Parker, Exum round out top 3

The playoffs are underway, which means almost half the league is already looking forward to the draft. Let's mock it.

Wiggins, Parker, Exum round out top 3

McGary told Yahoo's Dan Wetzel that he got high just once, which may well be true, but which seems tellingly incidental to the general sense of exasperated this-again weariness that has (with some exceptions) greeted the ruling. Yes, this is the NCAA suspending a 21-year-old for a calendar year in response to a first-time marijuana offense. There is something profoundly ridiculous about all those words being piled atop each other and presented as a case of justice being done, or a punishment fitting a crime, and that is because we are already in the process of learning to shrug at things like a 21-year-old taking a few hits off a joint.

But in the McGary Affair, the fateful joint -- sorry, there is no writing around the echo of Rob Delaney's #420NO tweets, none at all -- is not the thing that matters. The marijuana in question is maybe most usefully thought of, to coin a concept, as a gateway into a larger consensus that's earlier on in the process of emerging. The outlandish disjunction between the punishment and the crime in this case is the hit that brings a whole penumbra of other ridiculousnesses into sharper relief and brighter, deeper absurdity. The NCAA on pot is the NCAA, on pot.

Our own Kevin Trahan did a fine job running down the various and variously contradictory punishments that McGary's solitary failed test might have drawn at different schools, or at different times, or even in next year's NCAA tournament instead of this one. (Had he been busted with a joint by a member of the Ann Arbor police department outside Jerusalem Garden, McGary's punishment would've been a $25 fine.) 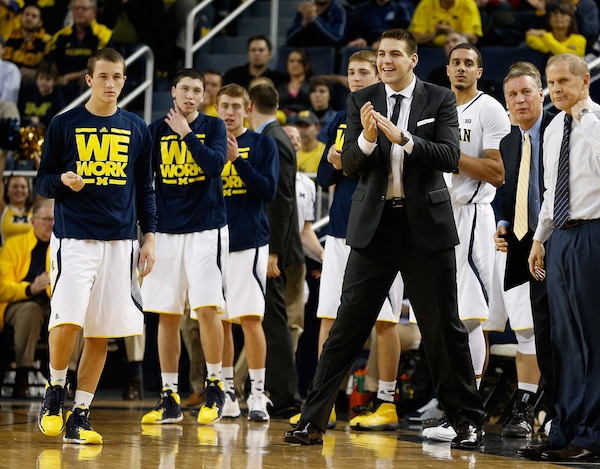 The extent of Mitch McGary's role in the 2014 NCAA Tournament/Photo Credit: Gregory Shamus

The rebuttal to this is that rules are rules. Which indeed they are, and if McGary likely didn't know how long a suspension a hit or two would carry, we might as well assume that he knew marijuana is still illegal. But when the conversation turns to rules where the NCAA is concerned, the conversation gets complicated. This is because the NCAA's metastatic rulebook only grows and grows, wrapping wild and warped new MC Escher-ish blind alleys of sub-regulation around the old rules with each year that passes. It's desperate, and by design.

This is not so much governance as a performance of it, or a parody of it -- perhaps the most peculiar aspect of the rampant and ridiculous administrative gold-plating that has been the result of the NCAA's feudal economics is the creation of a compliance industry, and with it a hothouse class of micro-bureaucrats whose jobs are to parse the NCAA's increasingly opaque rules and regulations. This seems like a lot of work and a lot of expense just to obscure that the main purpose of the NCAA has become the preservation of a status quo in which the institutions sit heavily atop the unpaid labor force that comprises their highly profitable product, and with the NCAA on top of all that. For the NCAA, though, it's not too much work or too much expense. For the NCAA, it's all that's left.

And that is the consensus that comes creeping up, here -- the increasing sense that all the NCAA's righteous legal pettifoggery can best be filed under "waste of effort/expanse of shame." McGary and his teammates are obliged to take multiple drug tests while their fellow students -- who are, per the NCAA's last, best argument for amateurism, exactly like McGary in every way, except notably less good at sports -- are not, and all the NCAA has by way of an answer is a tautology and a wish: Rules are rules, and we are the ones who should make those rules. McGary and his fellow college athletes have no recourse or appeal, and the response is again an appeal to the rulebook and this teetering, tattered status quo.

This is how the end begins for certitudes that aren't strong or certain or good enough to last. The edifice cracks, jokes sprout through and widen the fissures, the laughter gets louder until it shakes the walls and drowns out the old voices of authority, who suddenly sound so shabby, so weirdly wrong. This is how we come to see that a thing accepted as permanent is, in fact, doomed. One day you're the NCAA, and one day -- one day perhaps sooner than any of us know at the moment -- you're just not.