John Calipari and Kentucky succeed by keeping it real

Kentucky has another monster recruiting class coming in next season. You can credit John Calipari's honesty for that.

Share All sharing options for: John Calipari and Kentucky succeed by keeping it real

Karl Towns caught the ball at the top of the key beyond the three-point line in the second half of the 2014 McDonald's All-American Game as 7-foot UCLA recruit Thomas Welsh sprinted to close out on him. Towns hit him with a pump fake and put the ball on the floor like a man wise beyond his years, driving to the rim and finishing through contact for the bucket. Later, Towns grabbed a rebound under the basket and threw a pinpoint outlet pass to a streaking teammate across halfcourt. It was the type of thing you'd expect to see from Kevin Love, and not many others.

Following Towns around all week at the festivities surrounding the McDonald's All-American Game left little doubt the 7-foot, 240-pound center is the next big thing. Like many of college basketball's former Next Big Things, Towns will play his college ball for John Calipari at Kentucky.

What is it about Calipari that allows him to connect with 15, 16 and 17-year-olds better than any coach in recent memory? How was he able to bag a record six McDonald's All-Americans in 2013 -- the foundation of a team that will play in the Final Four on Saturday -- and follow it up with four more Burger Boys in 2014?

"I think that just the way he is," Towns said before the McDonald's Game. "He never lies to you and he keeps it straight with you. Cal really does a great job of always being honest. That's the way the program is, it just runs on honesty."

Honesty. It might not be the first trait an outsider would associate with the Kentucky coach, not after scandals involving former players like Derrick Rose and Marcus Camby. But talk to any of the kids or parents who have committed to Calipari, and that same word keeps popping up.

Those who don't know him are prone to describe Calipari as a salesman. Some even use the adjective "sleazy." To those around him, though, John Calipari might be the most honest man in sports.

Kentucky and Michigan were tied at 37 at halftime in the Elite Eight when Carolyn Kyles, the mother of Wildcats star Julius Randle, had to hop on a plane to get home for work. The woman who raised Randle alone wasn't even allowed the opportunity to stay in Indianapolis until the game was decided.

It sounded unfair and unfortunate, but it's an anecdote with a happy ending. Randle is going home now too after Kentucky outlasted the Wolverines to advance to the Final Four at AT&T Stadium in Arlington, Texas, not far from where he grew up in Dallas.

As he has a way of doing, Calipari put the moment in the proper perspective.

Cal on Randle's mom leaving Elite Eight early because she had to go to work: "I don't think that's going to happen for very long."

Only a week earlier, Syracuse coach Jim Boeheim had a much different take on the same thing Calipari was referencing, the NBA Draft. Forget the players, Boeheim spoke only in his own self-interest.

"Kemba Walker, he's about what, the 20th best point guard in the NBA? If he'd have played here for us yesterday, he'd have had 40 points. That's what he would've had and everybody would've said, ‘Jeez, he's pretty good.'"

Walker, the former UConn star who led the Huskies to the national championship and then left for the league following his junior season, signed a contract worth as much as $10.66 million when he entered the NBA. Boeheim earns about $2 million per year and the players in his program bring the school a lot more money than that. The players, of course, are compensated only by free tuition and books and everything else that goes into being a scholarship athlete. It's nice, sure, but it isn't as nice as NBA millions.

Unlike so many of his peers, Calipari isn't scared of the NBA and its deep pockets. He embraces it. He thinks about the players before he thinks about himself. Calipari wants his players to get rich; he's only there to help their cause.

It's been this way for years, long before Calipari arrived at Kentucky in 2009 and immediately turned Lexington into the top breeding ground for future professional basketball talent. It may have started in 2002, when Cal essentially pushed freshman guard Dajuan Wagner out the door because he knew it was in his best interest.

Via our Kentucky blog, A Sea of Blue:

Take Calipari’s situation with Dajuan Wagner as a primary example. Wagner, one of the nation’s top recruits in 2001, was the first superstar to pair up with Calipari in nearly a decade. With Wagner, Memphis won twenty-seven games and looked poised for a deep tournament run if Wagner would return for his sophomore campaign. Still, Calipari revoked Wagner’s scholarship for his sophomore season because Wagner had been wavering on whether to declare for the NBA Draft or to return to school. Calipari knew it was best for his star to enter the draft and make millions of dollars while his stock was at an all-time high. By taking the decision out of his player’s hands, Calipari’s foresight salvaged Wagner’s career. The sixth overall pick in the 2002 NBA Draft was discovered to suffer from ulcerative colitis just two seasons into his NBA career. Had Calipari not forced Wagner to take the riches of the NBA, Wagner’s illness likely would have been discovered before he ever earned millions.

You wonder why the players all mention honesty.

Through his first four seasons at Kentucky, Calipari has helped 17 players get selected in the NBA Draft, 13 of which were first-rounders. He's had three No. 1 overall picks in Derrick Rose (at Memphis), John Wall and Anthony Davis. He had five players chosen in the first round of 2010 and six players taken overall in 2012. 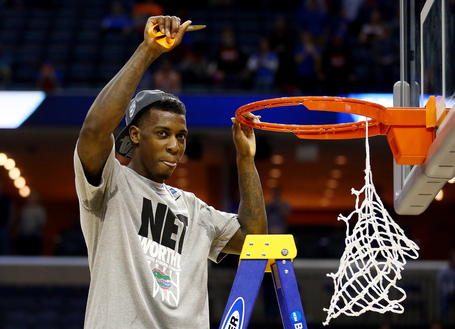 There's more than just NBA money, too. Rose signed an endorsement deal with adidas that was reportedly worth as much as $250 million. That makes the five-year, $94 million max contract Rose signed with the Chicago Bulls in 2011 look like pocket change. Davis (at Nike) and Wall (at Reebok and now adidas) have also earned major endorsement money.

"It's his history with what he's able to do for us," said Trey Lyles before the McDonald's All-American Game, a huge 6'10 forward heading to Kentucky next season with the type of size and face-up game NBA scouts obsess over. "He's taken guys like us and helped develop us and take us to the next level, to the NBA. That's what everybody wants to do."

Honesty. It sounds like a forgettable cliche coming from the mouth of a teenager, but it's deeper and more meaningful than it appears. Calipari tells his recruits if they work hard and succeed at Kentucky, it's not going to take very long for them to become incomprehensibly rich. That openness has gone a long way towards making Kentucky the most powerful program in college basketball.