Chaos ensues as #BBN takes over the city of Lexington.

Share All sharing options for: In Lexington, things burn

Walking down South Limestone, on the outskirts of Lexington's downtown district, the first thing you'll notice is blue. It's everywhere: On the roofs of buildings, on taxi cabs, on the backs of Kentucky Wildcat fans who are sporting just one of their 20-something Wildcat T-shirts. Arby's, McDonald's and Fazollis are all blue. Local bars hang big blue banners. The city is blue.

During the Final Four, Lexington turns into a concrete ocean. Fans flood the street and the bars by the hundreds, decorated in blue and white attire. When one Kentucky fan leaves his seat, another one fills it. One of the main game day bars, Tin Roof, is at capacity at 4 p.m., almost five hours before the Wildcats tip off against Wisconsin. 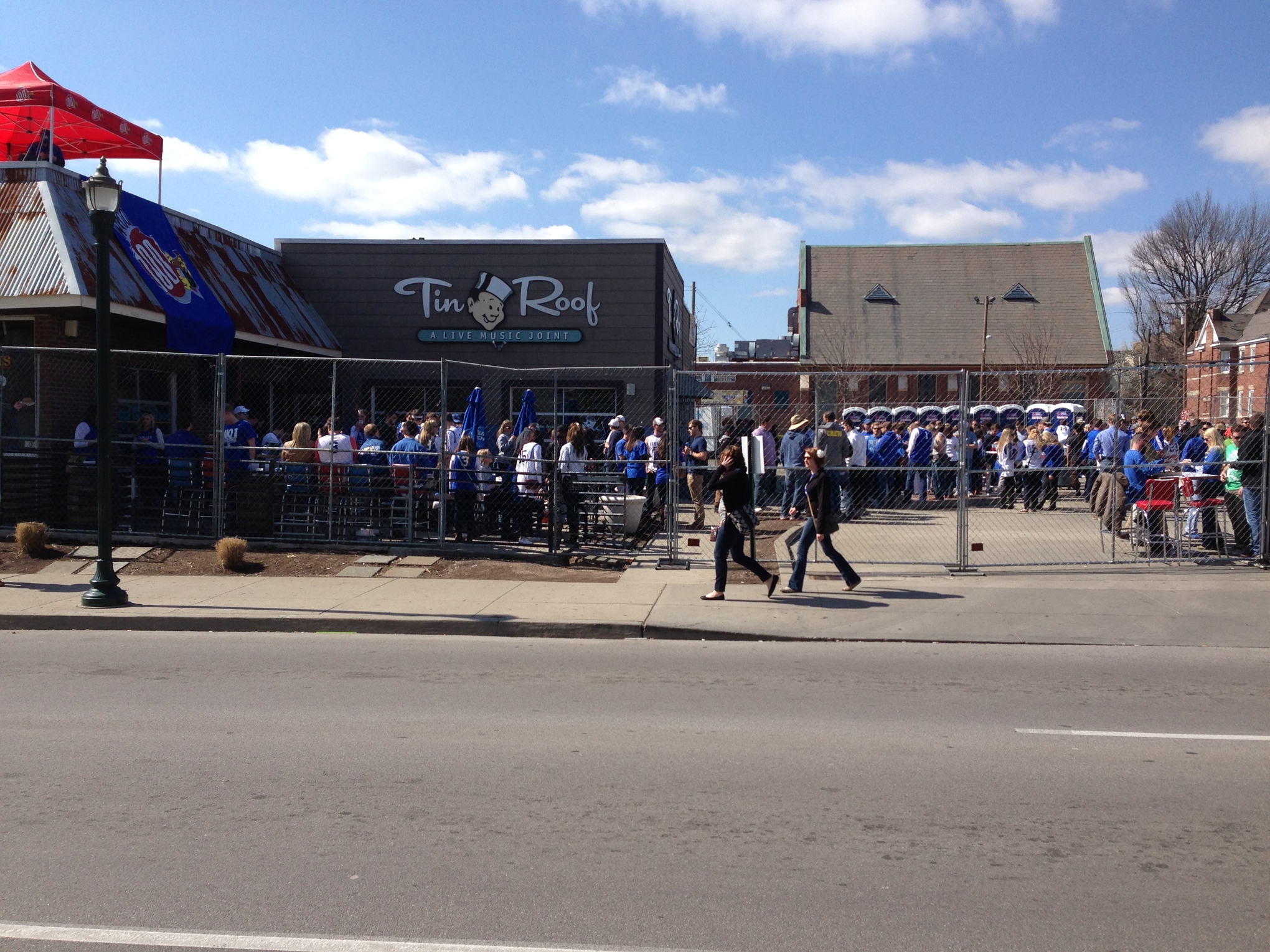 Walk down Limestone toward Kentucky's campus and the blue thickens. Across the street from the bulk of Kentucky's classrooms is a plaid pattern of roads where mostly students live. On State Street, the main riot spot, students and fans fill the front yards of old-timey looking houses. Those houses look like most college party spots: They are big, empty of normal furniture on the inside and messy as hell. Beer bottles and cans dot porches and kegs flow in the front yards. Groups of fans, dressed in blue, play corn hole in the grass and beer pong on the front porches.

Yet another timely three-pointer from Aaron Harrison has put the Wildcats in the national championship game.

I walked down State Street with a group of friends a few hours before Kentucky and Wisconsin tipped off. A tall UK fan in a white Kentucky polo and blue trimmed cowboy hat yelled at us from his porch, "if there's a Wisconsin fan in that group then fuck you!" His friends laughed and joked that Badger fans would be crazy to be on State Street. The group I was with walked down the road to a house on Crescent Avenue, a road that runs perpendicular to State. A pair of police officers patrol the street and my friend joked that they're going to need some backup after the game. Turns out, he was right. The officers, of course, had back up.

I watched the Connecticut-Florida game from this house on Crescent. A UK fan, Jimmy, tells me that he wants Florida to win. "I want some revenge, man." Jimmy won't get his revenge. Connecticut handled Florida on its way to the championship. Ryan Boatright and Shabazz Napier held Florida's normally dynamic backcourt, Scottie Wilbekin and Michael Frazier, to seven points on 12 shots. Right before the game ends, the group that I'm with decides that they are going one street over to watch the Kentucky game on a projection screen. They weren't kidding.

This is about 20 minutes before tip off: 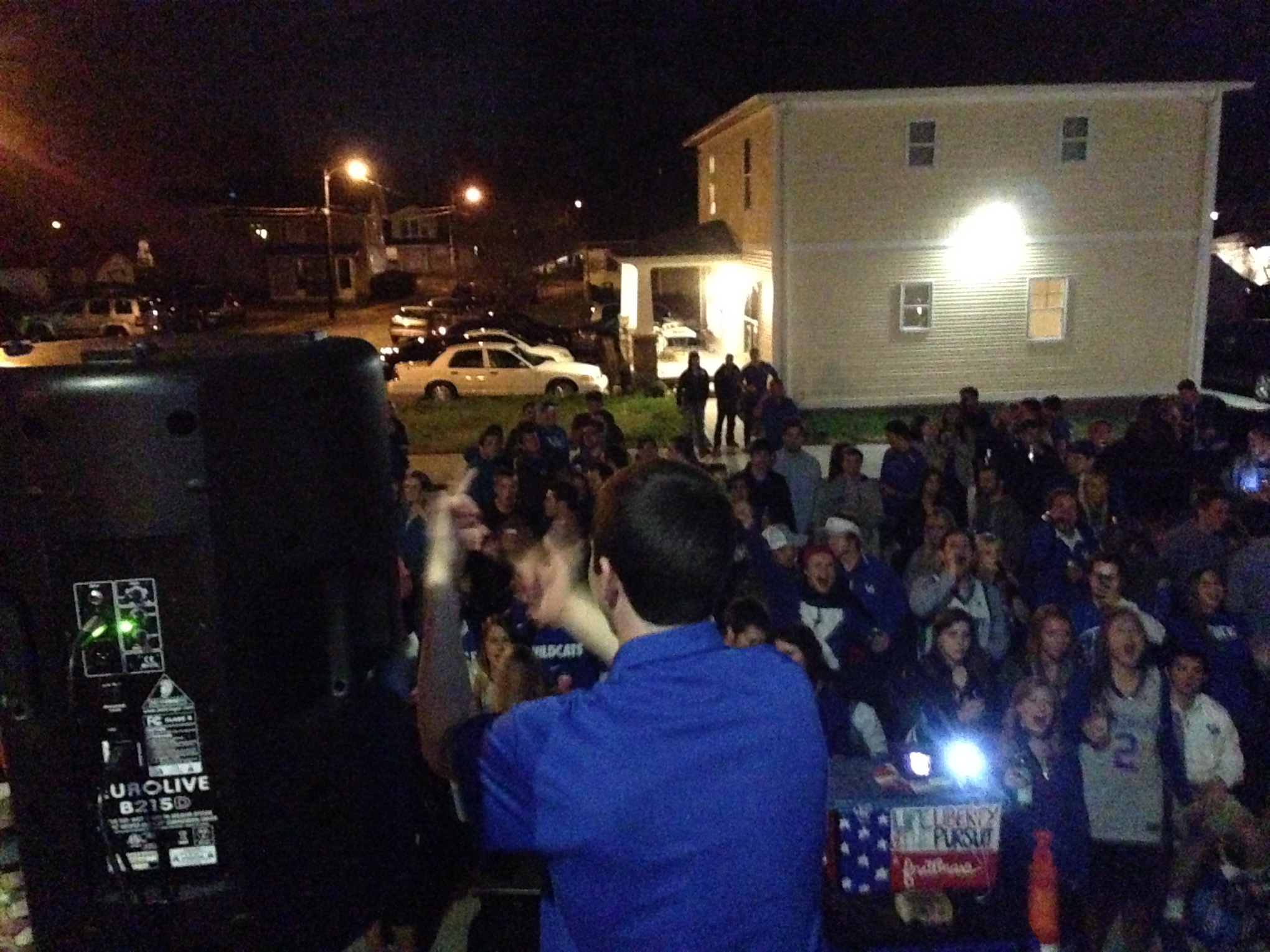 The broadcast was set on TNT, which used a UK broadcast team, and it blared from two, gigantic speakers. The TNT broadcast duo was Rob Bromley and Kentucky legend Rex Chapman. They were annoyingly pro-Kentucky, but that was the point. This was a huge group of Kentucky fans celebrating an improbable and exciting run through arguably the toughest bracket in history. It wouldn't have been right for this particular group of people to listen to Jim Nantz and Greg Anthony all night.

After a wild Saturday, two traditional powers will meet in Dallas to determine an NCAA Tournament champion.

During commercial breaks, the DJ, whom I found out was celebrating his 21st birthday at midnight, blared house and dance music and the crowd danced as if it were in a Vegas nightclub. This wasn't just a Final Four game; this was an event. This was a carefully planned party and the people who lived at the house welcomed anyone and everyone to join in and watch on their projector screen. "Just don't touch the projector," the DJ yelled. When the game returned from commercials, the music stopped, the broadcast team started back up and the crowd intently watched the game.

Eventually, there were hundreds of people in this back yard. That inevitably meant that the party turned even crazier. Halftime was a shit show. People danced to electric music and jumped up and down and chanted for their Wildcats. The second half was a roller coaster. Every Kentucky basket was like the Fourth of July. Every Wisconsin miss was like ball dropping on New Year's. Near the end of the game, when it looked like the young Wildcats had finished their run, the crowd stood silently. A gasp let over when Traveon Jackson was fouled on the perimeter. The Badgers had hit all 17 of their free throws and it looked like Kentucky had ran out of magic. But he missed his first foul attempt, then this happened:

The blue coated crowd lost its mind and DMX was there to explain everything:

And then Wisconsin's final shot was just a little too strong:

Everything broke loose. Fans from different parties convened on State Street. Mobs converged as chants and screams filled the night sky. Riot police braced in groups outside of the sidewalk to bottle the thousands of fans to the street. Some fans rushed to take pictures with the officers, most of whom were happy to take a photo back, and others ran to just be in the middle of something way bigger than themselves.

There were jerks, of course, because some bros become jerks when they drink more alcohol than their bodies can handle. Those people threw bottles and destroyed stop signs, but they were few and far between. In all, only 21 people were actually arrested, a small number when you consider how many people were in the street.

About 30 minutes after the game, I found myself completely separated from the group I watched the game with. But I did end up right in the middle of the ruckus, where I saw a couple of dudes climbing up trees, for whatever reason one would climb a tree.

it's jumanji in Lexington https://t.co/cKstmErSGz

One of those bros actually fell off the tree and onto the sidewalk. But, being the hero Lexington needed, he bounced up quickly, ran down the road and chanted "C-A-T-S CATS CATS CATS." Eventually I found myself right beside a gentlemen who took his shirt off and lit it on fire. This is, of course, nothing new — police put out at least 80 fires on the night — but this fellow swung the fiery shirt around his head like he was Petey Pablo.

Out on Limestone, traffic on the street was backed up. There are no riots in the area, but there are so many cars that the line sits at a standstill. That entire street became a mish mash of screams, sirens, engines, horns, chants and high-fives. Everyone high-fives each other. Some hug, but most high-fived. Helicopters flew overhead. The city looked like the apocalypse, only it was dying in a wonderful bliss.

Outside of Tin Roof, a crowd of blue shirts lined up well into the street. It would take over an hour to get inside, but the fans there couldn't care less. They were yelling and chanting and high-fiving each other all around the sidewalk. At one point a "Fuck UConn" chant broke out and one zealous UK fan explained that the Harrison twins are too big for Boatright and Napier. The people surrounding him are all wearing blue. They all agreed.