UConn's national championship is a victory over the NCAA

The Huskies defeated Kentucky on Monday night in North Texas to win their fourth title in 15 years, but it was the boldness of their words that might have been even more impressive.

Share All sharing options for: UConn's national championship is a victory over the NCAA

Shabazz Napier has never been one to wait. UConn's senior point guard has long embodied a certain sense of urgency with the ball in his hands, slashing and dribbling and pulling up from anywhere as if it was a brief acknowledgment that his time in college was too precious to waste. A player like that was not about to let the biggest moment of his life pass without making a point that had been stirring inside of him for two years. Jim Nantz was about to ask something nondescript, but it was clear Napier had his answer before even hearing the question.

"This is what happens when you ban us."

Napier said it as if he was addressing both everyone and no one at all, using his few fleeting seconds with a microphone and an entire country watching to let the NCAA know what they got wrong. A year ago, Napier would have been watching the tournament from home if he hadn't been too busy watching "River Monsters". A year ago, UConn was serving a postseason ban for too often failing to graduate players from 2007-2011. 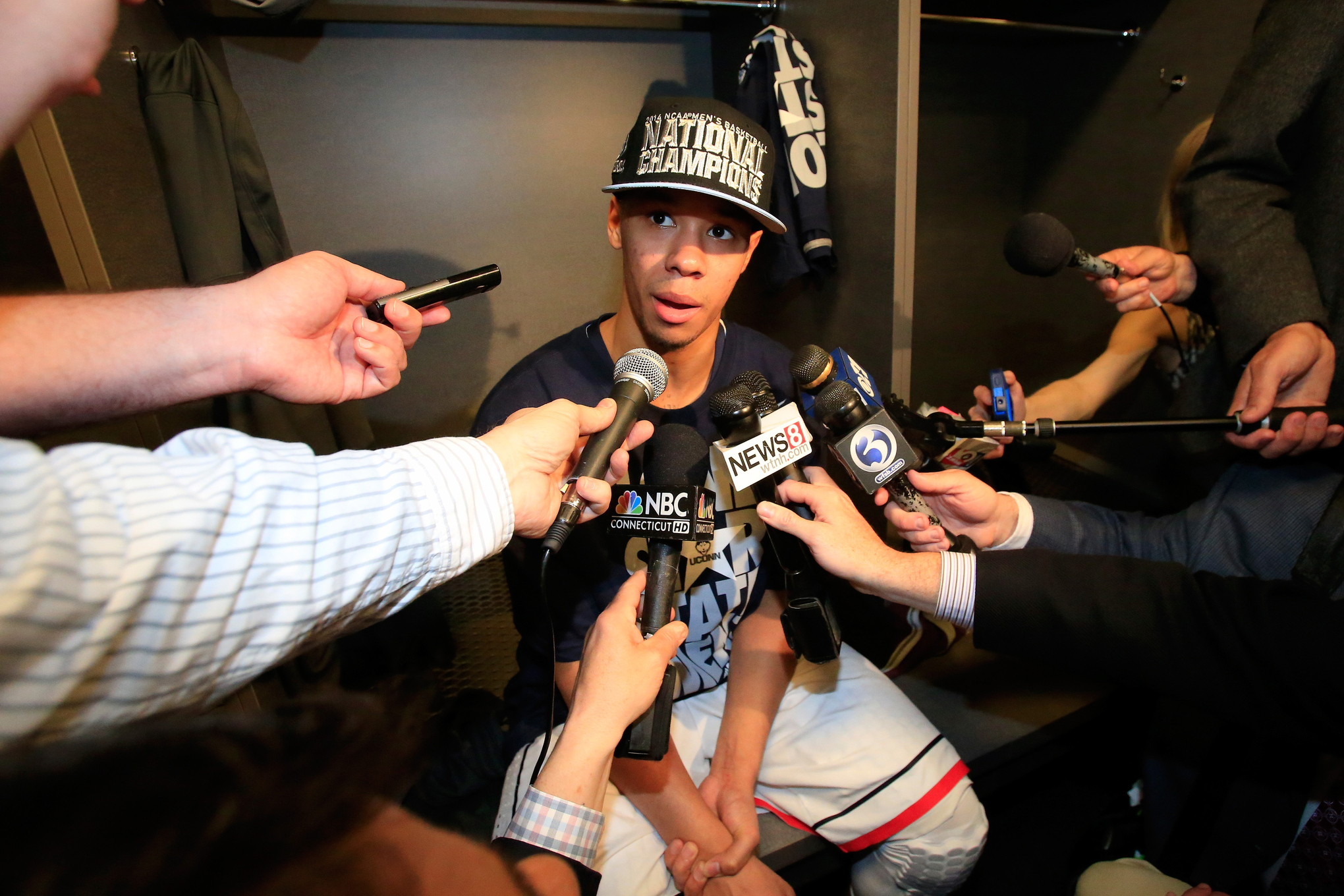 It was an audacious thing to say in the moment; for a second, it felt like Nantz might pull the mic away and go to someone else. It wasn't exactly out of character, though. Napier has used the entirety of the 2014 NCAA Tournament as his stage, and that wasn't always only limited to basketball. The Most Outstanding Player of this chaotic, hectic tournament made sure his words counted, too.

Napier made waves before tip-off on Monday when asked about the possibility of college athletes one day being paid, or at least receiving the improved treatment that's found at the heart of the unionization attempt by former members of Northwestern's football team. Napier did not mince his words.

We do have hungry nights that we don't have enough money to get food in. Sometimes money is needed. I don't think you should stretch it out to hundreds of thousands of dollars for playing, because a lot of times guys don't know how to handle themselves with money. I feel like a student athlete. Sometimes, there's hungry nights where I'm not able to eat, but I still gotta play up to my capabilities.

It may be hard to believe a player as dynamic as Napier at a program as storied as UConn ever struggled to find a meal, but perhaps he wasn't just talking about himself. Few ever experience the stage Napier was on this weekend in North Texas, a rare place where whatever he said carried an extra bit of gravity. As he proved all tournament long, Napier is not the type to shy away from the moment.

Napier wasn't the only UConn player who had good reason to speak out against the NCAA. In the immediate aftermath of the final buzzer, starting guard Ryan Boatright made it a point to seek out and embrace his mother. They had been through so much together, and a small part of that hardship was brought on by the people who seem to run college sports without a beating heart.

Boatright's early days as a freshman at UConn were plagued by scandal for something that was neither illegal or immoral, but still necessitated the NCAA's thorny involvement. It started when Boatright's mother Tanesha wanted to check out the schools her son was considering, which seems like a reasonable enough thing to do.

Boatright's college recruitment had already been a dizzying exercise, after all. He committed to Tim Floyd and USC as an eighth grader before he even decided where he would play in high school. He later gave a verbal commitment to Bob Huggins and West Virginia on his way way to winning Mr. Basketball in Illinois in 2010. When it was finally time to choose a college for good, Boatright's mother accepted money from a wealthy friend (Reggie Rose, older brother of the star guard on the Chicago Bulls) so she could accompany her son on college visits. 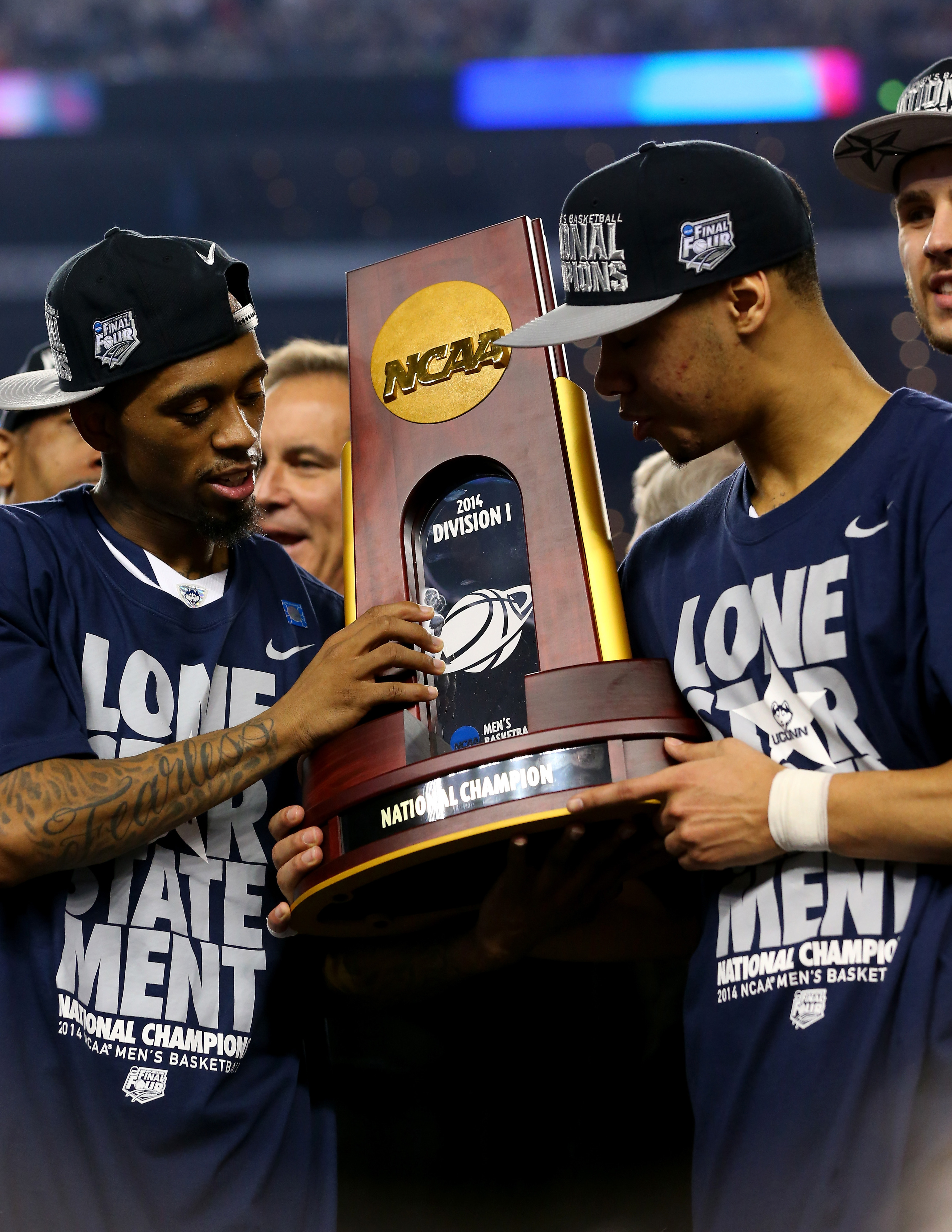 The NCAA said the benefits covered Tanesha for four official visits, and included about $1,200 in cash. Pay no mind to the fact that Reggie Rose is nothing resembling a UConn booster. Boatright still had to sit out nine games with a suspension as his future laid in the hands of the NCAA.

Boatright would eventually get back on the court, and two years later it led to him to that podium in North Texas next to Napier. That's where NCAA president Mark Emmert awarded UConn its national championship trophy just one day after calling the unionization of college athletes "grossly inappropriate" in a move that once again showed how out of touch the NCAA is.

For Napier and his UConn teammates, it must have been extra sweet to accept the trophy from Emmert one year removed from being disallowed to play in the NCAA Tournament because players who arrived at the school long before they did didn't graduate. The NCAA continues to perpetuate the myth of student athletes, failing to recognize they made UConn spend the last month in Memphis, Buffalo, New York and Dallas because of the tremendous amount of money at stake. They were everywhere, really, but back at class in Storrs.

It's hardly the first or the last time a program or a player will feel like it received a raw deal from the NCAA, but the choice to speak out against it is encouraging. This is how change can start, with an undersized point guard not being afraid to speak his mind in front of a national audience. UConn defeated Kentucky to win its fourth national championship in 15 years on Monday night, but the victory also allowed a statement that was just as impressive.