The 25 college basketball recruits you need to know

Thon Maker, Jaylen Brown and Josh Jackson will be among the biggest names during the July live evaluation period.

Share All sharing options for: The 25 college basketball recruits you need to know

The live evaluation period for college basketball recruiting starts on Wednesday at 5 p.m. It's the first of three separate four-day stretches in July when coaches are allowed to be on the road evaluating talent.This is the single most important stretch on the calendar for recruiting. Coaches aren't allowed to talk to recruits or their families, but they will be in gyms across the country evaluating the best high school talent.

With so many top players uncommitted heading into July, the live period is going to be as competitive as ever both for schools and players. Only five of ESPN's top 30 in the class of 2015 have already selected a college. Forward Ben Simmons, who is set to go to LSU, is the only player in the top 14 who has already committed.

Major college basketball recruiting is always a fluid situation. Already one top prospect, L.A. combo guard Tyler Dorsey, has decommitted from a major program (Arizona) in part because the school continued trying to bring on other players on his position. Here are 25 players to monitor during the live period that could help sway the balance of power in college basketball a year from now, and beyond. This list includes both incoming high school seniors (class of 2015 recruits) and incoming high school juniors (class of 2016 recruits). 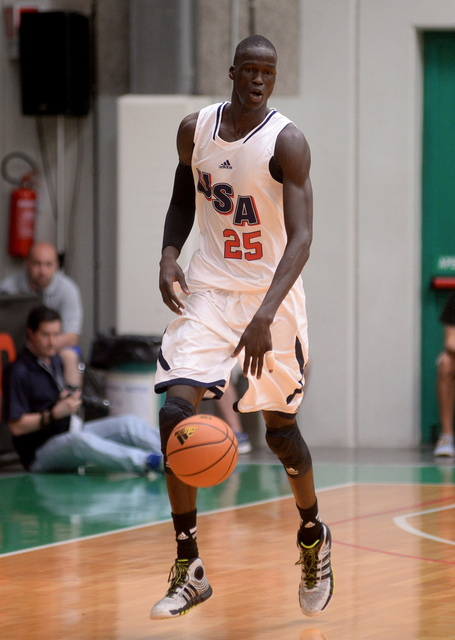 What do Andre Drummond, Andrew Wiggins, Nerlens Noel and Noah Vonleh have in common? Each reclassified in high school. Maker is on that trajectory, and a big July could push him to graduate high school in 2015 instead of a year later. Maker is a mixtape phenom who has been covered on this website extensively. He isn't a perfect prospect, but 7-footers who have jump shots this smooth are rare at any level of basketball. Maker needs to get much stronger, but his size and advanced skill set gives him the chance to be a special player.

Simmons is one of the few top prospects in the class of 2015 to already pick a school, but that doesn't mean he'll be able to avoid the spotlight in July. The next big-time prospect out of Australia, Simmons is capable of getting easy buckets in the paint with a soft touch and good athleticism. He also has a tight handle for a forward with his size, capable of grabbing a rebound and taking it coast-to-coast on the fast break. LSU might have the best player in the class of 2015.

Newman seems custom built to wreck college basketball a year from now. He's a 6'3 combo guard with deep range and the ability to get to the rim and finish emphatically once he's there. Newman says he is a packaged deal with center Diamond Stone. The two players are considering UConn, Kansas, Kentucky, Miami and N.C. State.

At 6'10, 250 pounds, Stone is a huge body with nice touch around the rim. He's the class of 2015's answer to Jahlil Okafor, even if he's not quite as long or skilled just yet. He and Newman could immediately vault any decent college team into championship contention a year from now.

Brown was arguably the best player on the U.S. team at the adidas Eurocamp. He's a big wing (6'6, 220 pounds) with a versatile skill set who has shown an improved shooting stroke over the last year. As Brown works to extend his range, he can rely on a relentless mindset that always has him ready to attack. Just about every major program in the country is after him, including Arizona, Kansas and UCLA.

Rabb is a bit raw offensively and still very skinny, but he's a pogo stick with tremendous potential to be a dominant two-way player. Rabb is still learning how to harness his elite athleticism, but he's naturally capable of rejecting shots above the rim at one end and flushing home alley-oops at the other. All of the most prestigious programs in the country are after him.

Jackson isn't a freak of nature like Maker, but you can make the argument he's the best basketball prospect currently in high school. The 6'6 wing has great athleticism, a developing ability to score from all three levels and high basketball IQ. The sky is the limit. With the mixtape cameras rolling in July, Jackson could exit the live period as a YouTube sensation.

Giles suffered a torn ACL, MCL and meniscus one year ago at a U.S. U16 FIBA competition in Uruguay. If he comes back with the same high-flying athleticism he showed before, the sky will be the limit for the 6'9 forward. What sets Giles apart is his feel for the game. It isn't uncommon to see him throw no-look passes or fire the ball crisply to cutters working the baseline. If he's fully healthy, Giles could be a special player.

Tatum is another gifted passer who could in time develop into a point-forward. He already boasts a nice floater and a developing mid-range game. Tatum and Giles are rumored to be a packaged deal. That's a long way off, but it would be a monster commitment for any program.

Ellenson can really shoot the rock, which is going to make the 6'9, 225-pound power forward a commodity to any school. If he can keep adding strength, the Wisconsin native could be seen as a Mitch McGary type with better range.

Born in September of 1997, Jeter is a late riser as one of the youngest players in his class, but he has the size (6'10) and athleticism to develop into a force on the low block over time. Duke, Kansas, Arizona and UNLV are all after the Las Vegas native.

Monk is a cold-blooded scorer, and he proved it by dropping 59 points in one EYBL game this spring. He isn't the biggest guard (6'3) and doesn't have great court vision yet, but he's extremely explosive off the dribble and is a killer in transition. Good luck keeping keeping Monk out of the paint when he gets the ball. Once he's there, he's probably spiking home a dunk to the embarrassment of his opponent.

Zimmerman is a legitimate 7-footer oozing with skill. He can score on the low block, distribute from the high post or shoot from the perimeter. His biggest challenge thus far has been staying consistent -- scouts have seen him dominate one event and no-show at the next. He'll never be a huge defensive presence because he isn't as athletic as the other big men in this class, but his offensive skill combined with his size makes him one of the best centers in 2015.

Brunson scored 56 points in the Illinois state semifinals against a loaded Whitney Young team featuring Jahlil Okafor (Duke), Paul White (Georgetown) and Miles Reynolds (Saint Louis). He's a big body with the skills to be a distributor or scorer out of the lead guard spot. He is likely the best point guard in the class of 2015, and his recruitment is wide open at the moment. His father Rick played in the NBA for nine seasons.

Diallo is a strong, athletic forward who measures at 6'9 with a 7'3 wingspan. He's arguably the top shot blocker in the class of 2015 after Rabb. His high motor and finishing ability may remind some of Montrezl Harrell.

Thornton came on strong in the spring and will be one of the most sought-after guards in 2016. He's already drawing rave reviews.

I asked Stephen Curry which camper stood out to him the most. He said Derryck Thornton. Thornton won the camps most outstanding player award

I think @DerryckThornton can be a special player and monster talent. He ball skills are off the charts. He knows where he needs to improve.

Smith has an elite first step and can finish above the rim easily for a 6'1 point guard. He was on-and-off at adidas Eurocamp, but he projects as arguably the best pure point guard in his class if he can find consistency. The Fayetteville, N.C. native already has offers from Duke, North Carolina, Wake Forest and N.C. State.

Azubuike has measured at 6'10, 268 pounds and he's still months away from starting his junior year of high school. He's a huge body with good athleticism who is simply too big and too strong for anyone his age.

Dorsey decommitted from Arizona, so now he's out to show everyone he's still one of the better players in the class of 2015. The 6'4 combo guard has natural scoring instincts and shines in transition.

Ball broke out at Pangos All-American camp in the spring as a 6'5 point guard with a silky-smooth offensive game. His huge frame and advanced passing ability will help him draw comparisons to Shaun Livingston and Michael Carter-Williams.

Briscoe is a train going to the lane as a combo guard who is more physically developed than most of his peers. The New Jersey native is being heavily courted by Arizona, Rutgers, Baylor and UConn, among others.

Trier is a scorer, pure and simple. The attacking 6'4 guard is old for his grade, so few players at this level can stay in front of him. The New Jersey native has been on the national radar since he was in sixth grade.

The North Carolina native has used a recent growth spurt to turn into a long 6'8 wing with a pure shooting stroke from beyond the three-point line. He's still only 180 pounds, but he'll have big-time potential when his body fills out. All of the North Carolina schools have offered him, along with Louisville and Florida.

At 6'9, 220 pounds, Bragg is one of the most athletic big men in the class of 2015. He is a great rebounder and finisher at the rim, and has developed a jump shot. His ESPN page currently says he has 25 offers.

The 6'4 guard can score in a variety of ways. He isn't polished as a distributor, but he has advanced slashing ability and can drain a pull-up jumper.