Kansas is chasing its 13th straight Big 12 title. Can anyone stop them?

The Jayhawks are trying to do something not done since UCLA's heyday.

Share All sharing options for: Kansas is chasing its 13th straight Big 12 title. Can anyone stop them?

There was a time in the distant past in which the Kansas Jayhawks weren’t crowned Big 12 regular season champions. At this point, it’s something many would have to see to ever believe.

It has essentially become a modern-day folk tale: An entire generation born either during or after the 2004-05 season hasn’t lived to witness Bill Self’s program fall short of headlining the Big 12. Even as the past three seasons provided unprecedented conference-wide competition, the Jayhawks’ level of excellence remained.

After 12 straight conference titles, the Jayhawks are on the heels of history. With another Big 12 championship, Bill Self would tie the mark set by UCLA in the 1960s and 70s. It begs the question: can anyone stop them?

Oklahoma State, TCU, Kansas State and Texas Tech are all a piece or three away. After a farewell from Buddy Hield and Georges Niang, among numerous other key talents, Oklahoma’s Lon Kruger and Iowa State’s Steve Prohm are back to rebuilding rosters that fell short of stealing Kansas’ annual supremacy.

If you’re looking for real challengers in the Big 12, start with three programs: Baylor, West Virginia and Texas.

How dangerous are these Bears?

Quite similarly to Iowa State and Oklahoma’s measure of attrition, Baylor lost Lester Medford to graduation, Taurean Prince to the NBA and Rico Gathers to the NFL -- yes, the NFL. In hopes of filling their shoes, Drew reeled in the nation’s No. 38 recruiting class, led by four-star small forward Kristian Doolittle. But replacing the aforementioned trio’s 36 points, 17.4 rebounds and 9.3 assists per game and often-intimidating physicality is far from an easy fix.

There’s plenty of capable talent on Baylor’s roster, with Al Freeman and Johnathan Motley potentially poised for first-team All-Big 12 seasons. Terry Maston and King McClure have opportunities to emerge as scoring threats in heightened roles. Ishmail Wainright and a trio of incoming wings should fill the roster out in roles off the bench.

But the difference-maker in Baylor’s ceiling next season is Jo Acuil. If the Australian native can provide some semblance of the numbers he put up playing JUCO ball -- 20.1 points, 11.2 rebounds and 4.7 blocks per game -- Baylor could be in for a considerably successful season. But even at full potential, the 2016-17 Bears aren’t a team that will have much luck finishing atop the conference.

The pieces are in place, but so are numerous uncertainties, which could become the difference in mediocrity and matching last season’s 22-win effort. If Baylor anticipates its first conference title since 1950, the lucky number needs to be closer to Kansas’ typical 26-plus-win mark. That’s a feat just outside of what the Bears can reach in 2016-17. 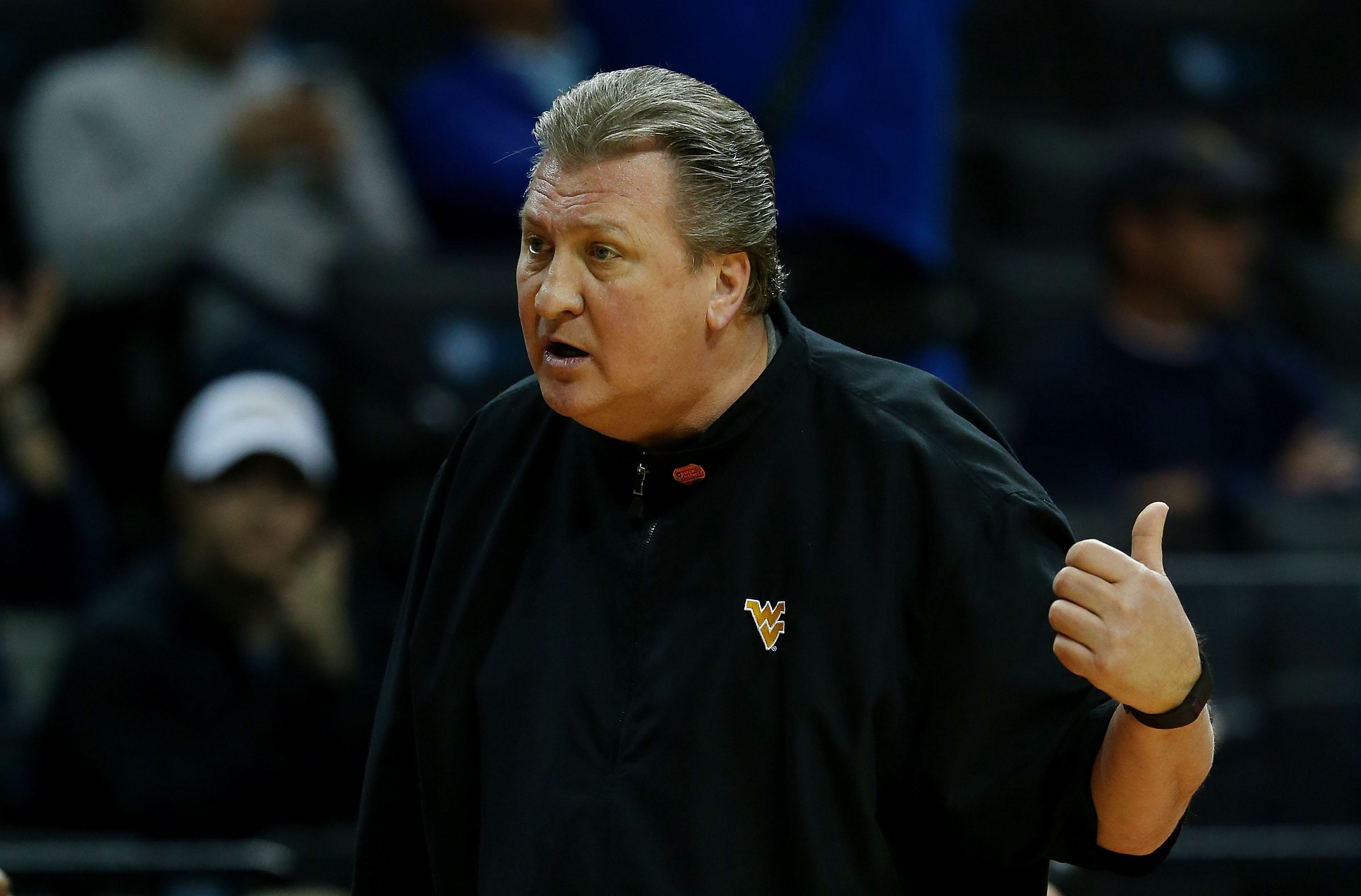 Without the massive wingspans of Devin Williams and Jonathan Holton anchoring the paint, West Virginia’s hope of unseating Kansas from it’s fixture atop the conference extends is about as realistic as Baylor’s.

The Mountaineers came closest to matching Kansas last season, finishing two games behind with a 13-5 conference record. While Kansas reloaded with some top-tier talent, Huggins will need to rely of the returning roster -- one that’s still chock-full with skill and experience, despite losing Williams, Holton and Jaysean Paige’s 35.9 points and 20.6 boards per game. More notably, they were three tremendously valuable presences in Huggins’ Press Virginia system, which requires waves of bodies to see significant playing time.

In what should still become an eight-man rotation, can Jevon Carter, Daxter Miles Jr. and Tarik Phillip shoulder the load Williams, Holton and Paige left behind? As expected, the Mountaineers are going to create chaos at every corner of the court, just as they did last season. But how well can a roster devoid of star power perform?

If we're talking well enough to emerge as the Big 12’s authority heading into March, the answer is no.

Smart facing a rebuild or a reload?

Texas’ roster turnover and replenishment following last season is strikingly similar to that of the Jayhawks. Much like the seven players Self must replace, Smart’s latest obstacle is figuring out how to allocate the minutes and roles left behind from six departed Longhorns.

This mass exit left Texas without last season’s entire starting five, including a first-team All-Big 12 point guard in Isaiah Taylor and the Big 12 Defensive Player of the Year in Prince Ibeh. Many projected a rebuild in Austin, but after Smart hauled in a four-man class -- which ranked No. 7 nationally, headlined by All-American’s Andrew Jones and Jarrett Allen -- the upside of Texas’ 2016-17 looks considerably more optimistic.

With sophomores Kerwin Roach, Eric Davis and Tevin Mack expected to progress and become rotational mainstays, Texas’ roster owns some of the most potential in the nation. But what the Longhorns lack, and what should become the difference long before the final stretch, is experience.

Including Mareik Isom’s time at Arkansas-Little Rock, Texas will own only 5,984 career minutes of game-time experience to begin the season. Despite seven members from last year’s unit now gone, Self will have the luxury of a roster with 8,161 minutes of action. More notably, with point guards being so critical to an elite team’s success, the Jayhawks’ duo of Frank Mason III and Devonte’ Graham’s 4,798 minutes of experience is essentially matched with none from Texas, whose only true floor general is Young, a true freshman.

Kansas’ experience, and Texas’ lack thereof, will result in a three-game Jayhawk advantage when all is said and done, at the very least.

In the one-and-done era in which two years with a player is a gift, attrition is the name of the game. It’s one Self plays masterfully, having replaced all five starters three times during his 12-year reign. While 2016-17 won’t require such an overhaul, Self will be tasked with filling the void of presence and professionalism now departed -- primarily, Perry Ellis.

If potential No. 1 2017 NBA Draft pick Josh Jackson can make reality of his hype within the system, the absence of Wayne Selden Jr. could go almost unnoticed, as Jackson boasts similar skill and confidence. Additionally, Sviatoslav Mykhailiuk’s shooting touch and 16.7 points per 40 minutes will become utilized at a much higher clip, while former McDonald’s All-American Carlton Bragg Jr. will see a significant uptick from his 8.9 minutes per game in the paint. 2016 McDonald’s All-American center Udoka Azubuike and four-star power forward Mitch Lightfoot will aid in providing to the frontcourt, as well, in the wake of Jamari Traylor and Cheick Diallo having left Lawrence.

Aside from Ellis, Self quite arguably has a more talented and balanced roster at his disposal next season, led by the backcourt of Mason and Graham. While the majority of the Big 12 now seems to have more questions than answers, Self’s response to any concerns for replicated success every summer has been a Big 12 title literally every season since his first.

With expectations of a three-horse race to challenge the thoroughbred, will Scott Drew, Bob Huggins or Shaka Smart be the first to greet Self with a "check mate" since his debut season in Lawrence?

After 12 consecutive seasons of conference supremacy, it’s something we’d have to see to believe.