Another dramatic National Signing Day is in the books, featuring flips, major announcements, and a pair of book-learned programs punching well above their weights.

The most surprising thing that could've possibly happened on National Signing Day would've probably been Florida State's Mario Edwards declaring he thought he was going to get to play for a Bowden at Tallahassee, then following Terry Bowden to Akron. Either that or a hearty "ROLL TIDE!" coming from Landon Collins' mother. In lieu of either of those happening, here's a list of the 10 biggest surprises from Wednesday.

First, let's talk about the biggest non-surprise. Honors there would have to go to Decatur, GA three-star receiver Keithon Redding. I'm still having a hard time figuring out which school he signed with: 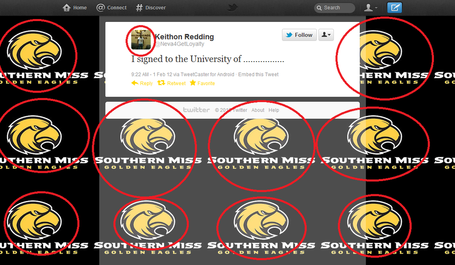 A four-star receiver flips to a conference foe on Signing Day? Surprising! He does it for the fourth time? Not surprising.

Yes, USC should always recruit well, and the coming end of probation should've boosted Lane Kiffin's class anyway. But the Trojans nearly pulled off a top-10 class despite bringing in only 15 players, adding Nelson Agholor, Leonard Williams and Devian Shelton on Signing Day, plus keeping Darreus Rogers from Arizona State.

Just your standard five-star turning to a state rival at the last minute. No big deal.

That a four-star linebacker turned from a loaded defense to one that's looking to replace a pair of starters at his position isn't all that shocking. But to do it due to bad morale at LSU? Bad morale at Les Miles' miracle magic fun town emporium? Bad morale despite all the grass he could ever eat and Mardi Gras and a darn live tiger walking around all over the place? Seems those rumors that bubbled up after the title game may have had something to them, perhaps?

6. Vanderbilt Refuses To Just Go Away

As our own Steven Godfrey and our SI.com bud Andy Staples chronicled in a pair of must-reads, Vandy hasn't been Vandy for a while now. But it was still unsettling to look up and see the Dores only lose one of those summer commits, the ones we were all so sure would be flying out the door come winter. Vanderbilt's class ranked No. 9 in Rivals' 14-team SEC, beating Arkansas, a national title contender, and Missouri, which landed the nation's No. 1 recruit, and finished within a Todd Grantham punch of topping pre-Josh Harvey-Clemons Georgia too.

It wasn't just that Greenberry, one of the nation's top 10 receiver prospects, shunned Notre Dame for Houston. It was that he did it in 2012. The Cougars are losing double extra senior quarterback Case Keenum and offensive mastermind Kevin Sumlin, while Notre Dame landed the country's No. 1 pro-style quarterback recruit, Gunner Kiel, is looking to replace Michael Floyd, and didn't bring a lot otherwise at his position. What did you do that for, Mr. Greenberry?

You don't often find choice luxuries in a survival bunker. With NCAA winds swirling, Al Golden's strategy for his 2012 recruiting class was to buy in bulk, since he won't be able to hand out very many scholarships in the future. While Howard Schnellenberger would expect nothing less than for every top Miami native to choose the Canes, especially ones who might start as freshmen, but the nation's top cornerback was expected to go to one of the other major state schools instead. And Golden's shopping cart, teetering at the top and wobbling under the weight of all this Army surplus, now includes a bona fide star on top.

Perhaps not a surprise for locals, who've long enjoyed the stories coming out of Valdosta about JHC's family, but Harvey-Clemons looked close to becoming this year's Cyrus Kouandjio, who turned to an archrival immediately after Signing Day in the name of family. His letter of intent didn't arrive until almost 24 hours after his commitment, but it was a surprising 24 hours, yes? The five-star linebacker's grandfather has long lobbied for immediate playing time, something Florida, and not the Dawgs, may have been offering.

Thus, the surprise wasn't what happened, but what appeared to be happening at the time. Everything worked out in the end, but we still get to treasure memories of ESPN's Dari Nowkhah quoting JHC's quotation of Atlanta rapper Future.

Nobody even tried to top Isaiah Crowell's white bulldog puppy stunt. Brush up on Holly Anderson's recommended Signing Day bits list for next year, and we're going to keep doing this until we get it right.

While Stanford has had a nice run during the Andrew Luck years, the Cardinal could put three non-seniors into the NFL Draft's top 10 this year. That's simply too much departing talent to recover from. David Shaw deserves credit for keeping the machine running once Jim Harbaugh left, and everyone's terribly impressed, but now it's time for Stanford to slink back to its computers and invent some expensive things. We'll send over a helicopter when we need some band stunts, and ... wait, what's that?

@AzizShittu Revenge Of The Nerds

Stanford landed three five-star offensive linemen (including two on Signing Day), which might be the best recruiting job at that position in history, and earned an announcement from five-star defensive end Aziz Shittu for good measure. Composite rankings have them at No. 7 in the country, topping the Pac-12 and beating Oklahoma, Georgia, LSU and so on. Quarterback remains a question, but anybody who'd decided to turn the Pac-12 over to USC and Oregon for the indefinite future may want to wait just a minute.