Davonte Neal Commits To Neither Notre Dame Nor Arizona

Elite receiver prospect Davonte Neal was supposed to sign with either Arizona or Notre Dame or a wild card team today. Not even the latter scenario fits what appears to have happened.

Share All sharing options for: Davonte Neal Commits To Neither Notre Dame Nor Arizona

Davonte Neal, a top athlete recruit from Scottsdale (Ariz.) Chaparral High School, was expected to commit to either the Arizona Wildcats or the Notre Dame Fighting Irish Tuesday morning, live from his former elementary school. Instead, Neal chose nobody. In fact, he didn't even bother to show up. After his announcement had been delayed by about a half an hour, during which viewers were treated to children playing xylophones on stage and forced to create multiple drinking games, woe began to set in:

RT @azc_obert: Source; Davonte Neal may not come to his news conf. Struggle with decision?

Bless the school, which at one point had to have the xylophone team play a whole 'nother set. Luckily, as pointed out on one of the most awkward sports broadcasts in the history of recruiting, principal Cheryl Green was able to quiet the crowd "just like that." Amazing. Ultimately, the students were dismissed because it was time to eat lunch. Recruiting writers covering the announcement, unfortunately, were not.

The thinking seems to be, as it has all along, that his father is still playing an active role in the college choice. That role being that he wants his son to choose Notre Dame, while Davonte wants to attend Arizona. Some analysis from SB Nation's Bud Elliot on what it may mean at some point when Neal does commit to a school:

Neal's finalists were Arizona, Notre Dame, North Carolina, and Arkansas. In addition to those four, Neal held offers from Ohio State, Florida, and Oklahoma. Neal is 5'9 and 170 pounds and is rated four-stars by most recruiting services. He can play slot receiver or cornerback at the next level. Neal was impressive during the Under Armour All-America Game practices in Orlando.

If he plays offense, Neal should have an immediate impact in a spread offense in the slot and taking a few handoffs. If he plays defense, Neal could contend for a starting job, or perhaps as a nickelback. There's no question that Neal will make an impact on special teams in the return game. Neal was one of the last remaining uncommitted prospects of the 2012 cycle and his signing just about wraps up the 2012 recruiting year.

All of this also provides us the last important-sports-work-being-done-next-to-school-things image like this for a while, so let's enjoy it: 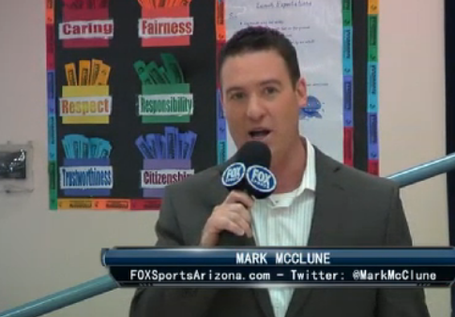 Neal and his family will definitely lose tickets for citizenship, trustworthiness, respect, responsibility, fairness and, of course, caring.

For more on Irish football, visit Notre Dame blog One Foot Down, plus SB Nation Indiana.

The Davonte Neal saga: From Arizona to Notre Dame and back