Every year, at least one recruiting story demonstrates the madness that is college football.

He skipped his Feb. 21 announcement at an elementary school, only to return hours later to apologize to the kids who'd missed class time and sign with Notre Dame.

It was a silly signing. The school's principal was nearly reduced to breaking out hand puppets to entertain the assembled children, the xylophone band had to play an extra set, and Fox Sports Arizona's reporters were all but breaking things in rage on air.

Was Neal's signing the silliest ever? Oh, far from it.

He wasn't even the first to delay until after his scheduled announcement. Greg Little and Terrelle Pryor did that. At least Neal's announcement actually counted. The year before, Cyrus Kouandjio announced on national TV he'd sign with Auburn before minutes later signing with Alabama.

Here are the greatest commitment stories in recent memory. Recent, because Signing Day only became a true spectacle during the recruiting ratings era. Most are from Signing Day itself, but the silliness starts earlier every year.

Hart was the first football prospect from Fernley, NV, to ever receive a Division I football scholarship offer. He offered it to himself in a high school gym filled with his peers, choosing a Cal hat over an Oregon cap and thanking the students and staff and his family. There were cameras and microphones and a victory walk. There's footage and everything.

Hart did not thank himself, and he should have. Without Hart, there would have been no scholarship offers to Hart.

He received no offers from any DI school, not even from Nevada. Cal didn't offer him, something the Bears verified after seeing his name pop up on Signing Day commit lists. Oregon did not offer, something the Ducks were happy to clarify once the press began to investigate the unheralded O-line prospect. It unraveled, he apologized, and it faded into the Internet's long history of Signing Day oddity.

That's not fair to Hart, who for his grand lie did have one perfect day of football glory (before eventually signing to play in Division II, four years later). There were cheers and a moment of triumph, and for a second he got to be precisely what he wanted to be: a hometown hero on his way to better things. He's got his knees and his brain intact and the memory of that day.

Well done, Kevin. I can't even complain about you wasting our time, because in the end this was totally worth the story. Entertainment always is.

It started with a recruiting diary for the Miami Herald, where Willie agreed to document the process. AND OH DID HE DOCUMENT IT. The actual diaries are buried in subscription-only archives, but you can Google to find snippets, and you still find articles like this, from the New York Times, where his Herald editor says, "Willie -- he has a mouth on him. These are things we've always heard about: the girls waiting for guys when they come off the plane, the booze, the food. Willie was more than happy to talk about it."

Dinner was tight. The lobster tail was like $49.99. I couldn't believe something so little could cost so much. The steak didn't even have a price. The menu said something about market value. I was kind of embarrassed so I didn't order a lot. But then I saw what the other guys were ordering, I was like, 'Forget this.' I called the waiter back and told him to bring me four lobster tails, two steaks and a shrimp scampi.

Williams was the person who made me certain that being a superstar athlete would be the awesomest life on earth. As Rivals noted, "One legacy of his recruitment is that the NCAA has since enacted reforms on what perks colleges can provide their schools."

There was also his Auburn visit, when he talked about meeting "farmers girls," and when presented with spinach dip, told his hosts, "I ain't no animal. And I ain't going to eat no plant." THE BEST.

And finally, this line:

Sometimes the parent fouls things up. Other times, it is the kid.

The star receiver for Spartanburg (S.C.) Gettys D. Broome High School was heavily recruited all over the Southeast and given a four-star rating. Jones was committed to Clemson before backing out, likely due to academics. The decision came down to Clemson and Florida State.

Making matters more interesting was that each program was coached by a Bowden -- Tommy at Clemson and Bobby at Florida State. Jones signed to attend Clemson, as did his mom. That was a mistake, as Jones was not ready to make a decision. He did not fax the LOI to Clemson, and instead, after receiving a call from Florida State's coaches, signed the FSU LOI and faxed it to Tallahassee. Clemson persuaded Jones to send the other LOI to them, perhaps as a memento (hint: not really). Clemson appealed to the ACC and the NCAA, showing them Jones' Clemson LOI.

Quick, 1Ls reading this instead of paying attention in class! Think back to contract law. What controls: the signature or the fax?

The ruling was that Jones must go to Clemson. He wasn't happy, but put on a good face and didn't raise a big stink. Jones would end up in a junior college before committing to Cal.

This remains the Tale of Two Cities of football recruiting. Logan-El, from Forestville, Md., (between Washington, DC, and Baltimore), twice gave Ralph Friedgen and the Maryland Terrapins an oral commitment, and when it was time to choose a location for his ceremony, he picked Baltimore's ESPN Zone. The place was packed with Maryland fans, including Friedgen's wife, Gloria. All signs pointed to Logan-El becoming a fighting turtle.

His use of hats became the standard by which all future Hat CeremoniesTM would be judged. He pulled out a Florida hat, talked about why the Gators were a finalist, then cast the hat aside. He pulled out a Tennessee hat and did the same.

Next came a Maryland hat ... and he put it down as well.

Amid some cheers and quite a few boos, Logan-El donned a Penn State cap. Mrs. Friedgen famously asked for her check and charged out of the restaurant. Maryland fans yelled, "Traitor!" at him.

Logan-El has no regrets, even though he flamed out at Happy Valley and ended up graduating from Towson. His high school coach, however, was rather embarrassed. But hey, why take others' interests into account on your big day?

What happens when a kid is undecided between Texas A&M and Ole Miss? In the case of four-star Louisiana cornerback Raven, his mother forged his signature and faxed it to Ole Miss.

Ole Miss couldn't read it and asked Raven to send confirmation, which didn't happen, because he did not send the original. The letter was voided, and Raven ended up at A&M after faxing a real letter later in the day. Raven defended his mother, saying both that she thought she was doing the right thing, and that she didn't know signing the papers was serious.

"His mom. Mom really wanted him here, David," UM coach Houston Nutt said, smiling, to Associated Press reporter David Brandt during today's news conference. "Mom wanted him here in the worst way. And so, (UM compliance director) David (Wells is) our expert on that, so the bottom line is when they told us that we said 'Hey, look, I want you to be here because you really want to be here.' And [Raven] was so torn. It's really hard, it's a hard hard decision, but when mom told me that, [I said] 'Hey, look, I want you to do what's in your heart.' And I think at the time he wanted to go elsewhere and look, I want them to want to be here." [...]

Wichita running back Bryce Brown, the nation's top recruit, was assisted during the process by trainer and mentor Brian Butler. Butler was a former felon, but let's not dwell on that. Butler published updates on Brown's status to a single-player pay website, charging $9.99 a month for news, including one about Brown skipping college to play in the Canadian Football League and probably one about him starting up his own college (that part is not true).

Brown committed to Miami, but didn't sign on Signing Day. He waited so long, in fact, that the offer expired.

Brown's recruitment never really ended, as he ended up signing with Tennessee (but not without a hat stunt), transferring to Kansas State (along with linebacker brother Arthur, who'd signed at Miami first), and leaving early for the NFL Draft despite playing in only 15 games in his entire college career. He somehow ended up being a contributor for the Philadelphia Eagles.

Just after Signing Day, Brown told Sports Illustrated he'd like to put on "seminars" to help other recruits through the process. I'd love to attend.

A five-star defensive end was committed to an in-state school for over a year. He loved the school, but became concerned when a writer covering a rival school planted the idea that his school had a secret commitment from another defensive end.

The writer convinced him to get revenge. They concocted a plan in which the player kept telling the school he was committed, all the while planning to switch his commitment to a rival on Signing Day.

On Signing Day, the player noticed the other guy was committing after himself. This bolstered his belief that the school was prepared to sign them both. So he decided to go through with the plan. He faxed his letter to the in-state rival, burning the team to which he had been committed.

Of course, the writer who hatched the plan was lying. The "secret commitment" signed with a school out West. 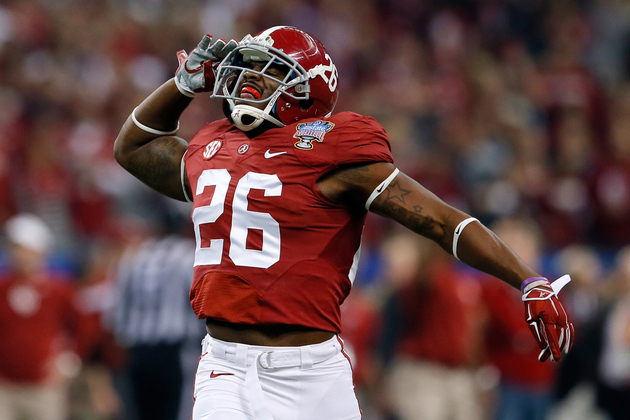 Five-star Louisiana safety Landon Collins committed to Alabama on air, during the Under Armour All-America Game. His mother, seated beside him in purple and shaking her head, wasn't happy.

"I feel LSU is a better place for him to be," Justin said as her son grimaced. "LSU Tigers, No. 1. Go Tigers."

Landon included his mom when it came time to finalize his decision. That's how, with Collins leaning toward Alabama this fall, Saban came to visit Justin. She says the coach offended her during his stay by promising that her son would be a high NFL draft pick and receive a multimillion-dollar contract. "I think he stereotyped me," Justin says. In her mind, Saban had told her what

And so many more

10. Derric Evans signed with Tennessee while sipping wine in a hot tub.

11. Before ending up at Virginia Tech, one player was tricked into committing to a fake Florida offer by ... uh, some asshole?

12. Brandon Jones chose Texas in 2016, despite a fan site covering archrival Texas A&M producing a high-quality documentary on him.

13. T.Y. Hilton chose FIU over West Virginia due to his son picking an FIU hat eight times in a row.

15. Many recruits have claimed they'll decide by coin flip. Ka'lial Glaud did. In 2015, so did Chris Warren.

16. Remember Ron Weaver, the 30-year-old who managed to identity-theft his way into playing for Texas?

17. Running back Alex Collins chose Arkansas on Signing Day. Then his mother stole his paperwork.

18. Bobby Bowden once scheduled a visit immediately after rival head coach (and son) Terry Bowden's, crossing paths with him seemingly on purpose.

19. DeSean Jackson would've signed with USC if not for a news report about him signing with USC.

20. Kicker commits to Penn State via epic music video, then decommits after sleeping near Jim Harbaugh.

21. Nebraska missed out on Marshall Faulk once a Huskers assistant let it slip that they wanted him to play DB.

22. Most importantly, you must never forget that Jimmy Clausen committed to Notre Dame at the College Football Hall of Fame after stepping out of a stretch Hummer.