On a day in which many of the state's elite recruits had not yet arrived for Florida State's Jimbo Fisher Camp, Rashard Robinson was impossible to miss. Wearing an orange helmet and Seminole-branded socks (see image below), the 6'1, 168-pound Robinson was impossible to miss. Florida State's coaches definitely didn't, as defensive coordinator Mark Stoops and head coach Jimbo Fisher watched the Pompano Beach (Fla.) Ely cornerback recruit with great interest.

Despite his height -- tall for a corner -- Robinson showed impressive agility and change of direction during drills. I spoke with Robinson recently during the Heath Evans Foundation Charity 7-on-7 event in Palm Beach, Fla.

Many believe that LSU is the most likely destination for Robinson. The recruit didn't deny that, but also indicated that others have a chance as well. "Florida State, Oklahoma... all my schools have a chance. Whatever schools are the best for me are what I'll go to," Robinson said. "I want to go to a school with a great football program, a great learning environment and a great crowd," Robinson said. "That'll help me be a better man in life and hopefully go to the NFL," he added.

In addition to the Jimbo Fisher Camp, Robinson plans to attend the Al Golden Camp at Miami, where he expects an offer from the Hurricanes. He also plans to camp at LSU, Oklahoma, Ohio State and Tennessee.

Rumors were swirling earlier that Robinson would not qualify for college and would have have better luck enrolling in junior college. He denied those rumors. "Actually, I am going to have a 3.0 GPA for this semester," said Robinson, who started the semester with a 2.2 GPA. Robinson, who took his ACT Saturday, said that the recruitment process opened his eyes to the importance of academics and work in the classroom. He plans to make his decision on National Signing Day. 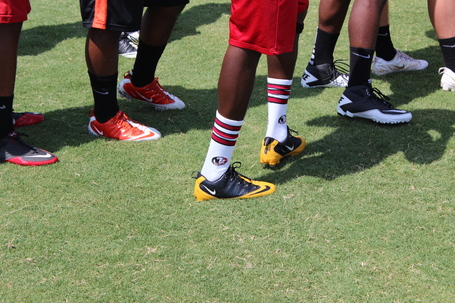