College Football Recruiting: Which Schools Spend The Most, And Why?

We can learn a lot about college football recruiting just by looking at the amount of money each school spends on bringing in new players. Follow @SBNationCFB Follow @JasonKirkSBN

Share All sharing options for: College Football Recruiting: Which Schools Spend The Most, And Why?

You may have seen this list by ESPN's Mitch Sherman, which ranked public FBS schools by how much money each spends on recruiting. It's pretty fascinating, and turns up a bunch of its own questions, such as where that money goes (sending coaches to scout and recruit, putting on camps, hosting visits, CHEATING*) and whether every school gets the same return on investment**.

* I'm kidding. No school includes its CHEATING as a line item on the public budget.

** No. Based on where each school ranks on the money spent list and in Rivals.com recruiting rankings over the same period:

The most frequent question: why does the University of Tennessee spend so much more on recruiting (an average of $1,307,155 per year) than anybody else does (Bama is second, but by $381,495 less a year). And if the Vols spend so much on bringing in players, shouldn't they always have the best teams or at least ones that can beat Kentucky?

As with everything involving college football and money, it's complicated!

Tennessee is 20th among all states in churning out top college football talent, based on the average number of Rivals.com three-, four- and five-star recruits produced per year. That doesn't sound so bad compared to the rest of the country, but the Vols don't compare themselves to the rest of the country. That output (of course it's gross to refer to high school players as being outputted) ranks below eight other SEC states, three of which rank among the four best in the country now that Texas A&M is in. Hard to compete against top-four talent bases with the No. 20 talent base.

And the SEC schools with less locally bred talent -- Mizzou, Arkansas and Kentucky -- might not even combine to yield the same level of historical football expectations the Vols face. They also don't have to deal with in-state conference rivals, though Vanderbilt recruits nationally, with more current players from Georgia than from Tennessee.

Visual time! A map that shows the average distribution of three-star-plus talent around the country -- the brighter, the better. Most of them are pretty dark -- there are many reasons why college football flourishes in certain places, but if you're looking to start up a program, you'd be wise to seek lighter shades here. 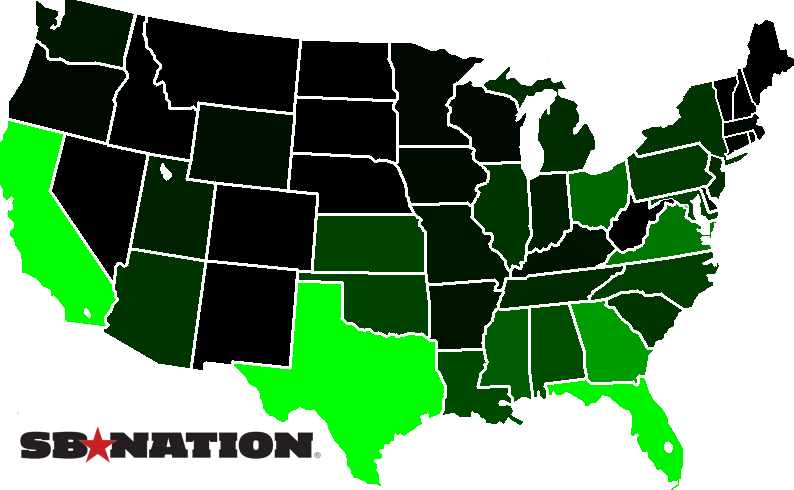 Rosters take shape according to this data about how you'd expect. Among top teams, the Ducks have only 22 players from Oregon and WVU has only 15 from West Virginia (which wasn't such a big deal back when the 'Eers were recruiting against UConn and Boston College), while the Aggies and Longhorns combined have 19 players not from Texas.

The team that started all this, Tennessee, currently has only 36 players from its state, more in-staters than only Kentucky and Vanderbilt among the SEC's 14 teams. By comparison, Georgia has 81 in-state players on its roster.

As you can see, Tennessee's annual competition -- the SEC East plus Alabama -- has better chances of finding suitable talent at home, while the Vols have to travel to succeed in Georgia (16 players), Florida (10), Alabama (six) and elsewhere. When the Gators or UGA make a serious out-of-state effort, it's for a select blue-chipper. When the Vols do it, it's Thursday.

It also doesn't help that Tennessee borders or nearly borders almost a third of the darn country. That's a whole lot o' room for intrusion, and the state military has been tied up by a water dispute with Georgia for some time now, I think. By comparison, South Carolina schools often only have UGA and North Carolina schools* to worry about. Oh yes, geography matters as much in recruiting as it does in war, as silly as that is.

* And Miami (Ohio). The RedHawks took eight South Carolina three-stars in 2011 and 2012. Not even gonna look up why. Just gonna enjoy being confused by Miami (Ohio)'s recruiting turf.

But Tennessee is far from the only school with a local talent deficiency to overcome. They just choose to go about it in a unique way -- by spending lots and lots of money to recruit the whole region. Here's a look at the talent distribution in each major conference as each major conference is composed moving forward, since the best way to gauge a school's resources is by comparing it to its annual peers.

Again, by the average number of three-star-and-up players from each state per year:

Among others that appear to be at a major disadvantage, there's Nebraska -- which recruits nationally (players from 20 different states) but will need to supplement its Texas pipeline (19 current players) now that it's in the Big 12 -- and West Virginia, which has made up for its territory via strong presences in Florida, Pennsylvania and throughout the DMV and now gets to hit Texas. As for the Pac-12, hello, Phil Knight.

We can also see which schools should always rank among the best in their leagues, and thus don't need to spend very much money on recruiting. Ohio State has the sixth-best state virtually all to itself except for Cincinnati, with more three-star-or-better recruits in its state than Indiana, Iowa, Kentucky, Oregon and Washington combined, and each of those states supports more than one BCS program. Thus, of course Ohio State spends less on recruiting than Rutgers does but still out-recruits almost everybody. Combine that with OSU's money resources, and that's why the Buckeyes should never be out of contention for the Big Ten title.