Share All sharing options for: Cam Newton Goes H.A.M. In Support Of 7-On-7 Team

The Cam Newton All-Stars, a club 7-on-7 team from Georgia, competed over the weekend in the IMG Madden Football 7-on-7 National Championship in Bradenton, Fla. They dominated a cakewalk slate during pool play and earned the No. 1 seed overall.

Then came tournament play, and there was Newton rooting on his kids: 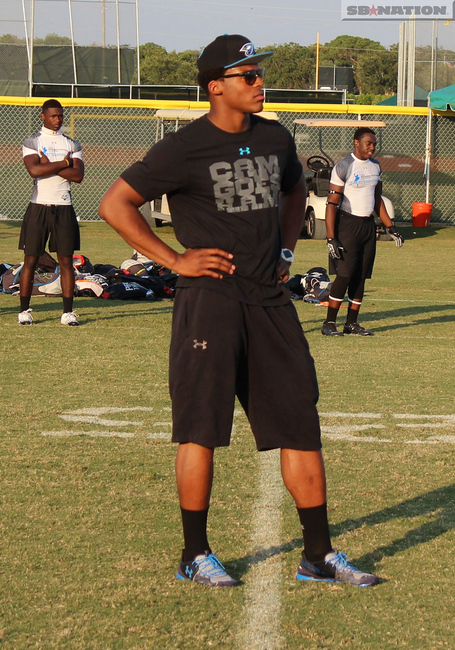 Unfortunately for Newton's squad, Cam couldn't actually play in the tournament, as the All-Stars lost to South Florida Express Pro (the 'B' team from the Miami/Ft. Lauderdale area) in five overtimes, 36-35.

Cam joked around with the opposing coaching staff, engaged in some friendly trash talk, including letting the members of South Florida's 'A' team mock his superman celebration, and was a great addition of star power for the event.

The SEC and NFL connections didn't stop there, as playing for Newton's team were twin brothers Elliot and Evan Berry. Brothers of who, you might ask? Why, none other than former Tennessee and current Kansas City Chiefs safety Eric Berry.