Defensive end recruit posts picture to his Twitter account, then quickly removes it. So it doesn't slow your reflexes after all.

Share All sharing options for: Davin Bellamy photographed near bong during Oregon visit

Coveted defensive end prospect Davin Bellamy, long thought to be deciding between Tennessee and Georgia, took a surprise official visit to Oregon this weekend. He tweeted out a picture from his visit that stayed up just long enough for a Reddit user to take notice: 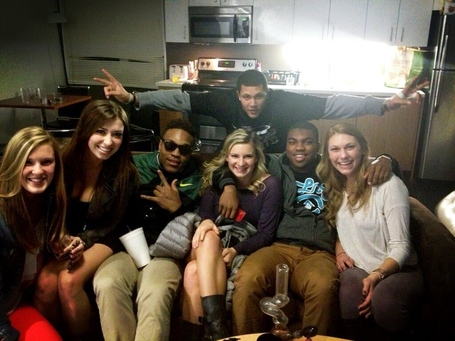 That's Bellamy in an Oregon jacket with two gentlemen, four lovely young women, and a bong. Bellamy quickly deleted the picture, for obvious reasons, but everything on the Internet lives forever.

Oregon is not thought to be a serious contender for the three-star defensive end out of Chamblee, Ga. He did not receive an offer from the Ducks until last week, and told reporters he was taking the visit to "see something different." Bellamy has been a Florida State commitment until December, but revoked his verbal after the Seminoles shook up their coaching staff. Georgia is the probable leader for his letter of intent entering the final few days before Signing Day.