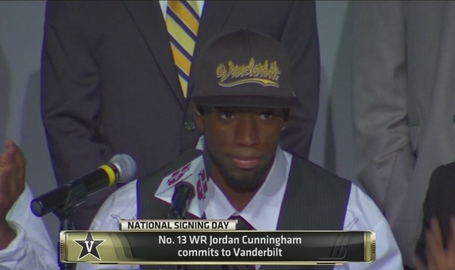 Jordan Cunningham will join the Vanderbilt Commodores, adding another four-star recruit to what's already the best class in school history.

Cunningham has a rare combination of speed and size: listed by Rivals at 6'3, 175 pounds, he's still capable of running a 4.57 40-yard dash. That earned the Fort Lauderdale product four-star status from some services, with ESPN ranking him as the No. 13 wide receiver in the nation.

Cunningham's offer list is unreal: he had a reported 45 schools seeking his commitment, ranging from the local -- Florida, Florida State, South Florida, Central Florida, Florida Atlantic, Florida International -- to the smart -- Northwestern and Princeton were looking at him -- to the nationally elite, as Michigan, Ohio State, and USC were in as well. But he cut that huge list down to a few from each category. Alabama and Oklahoma State also made the cut.

But from that list, it seemed as if Cunningham would likely choose an academically elite school. SB Nation recruiting analyst Bud Elliott wrote that he would likely be heading to Stanford in his National Signing Day prediction post before hearing from a source that Vandy would be the school.

Not a recruiting factory typically, Vanderbilt has put together a class ranked in the top 25 by both Rivals and ESPN, and Cunningham will only help solidify that ranking. Anchor of Gold wrote back in October about how "irrationally excited" they were about the 'Dores' class:

The biggest difference of all of the differences since Coach James Franklin has gotten to Vandy is the recruiting. Literally the lowest rated guys in the last two classes would have been near the top of many historic Vandy classes... This class could very easily surpass last year's class as probably the greatest recruiting class we've ever had.

They already had three wide receivers in their class in Carlos Burse, Gerald Perry, and Latevius Rayford, but Cunningham is the first four-star at the position in the class. They could make for a strong crew with one of two quarterbacks in the class, four-star Johnathon McCrary and three-star Chad Kanoff. The Commodores already have an elite wide receiver - Jordan Matthews decided to stick around for his senior year - but Cunningham could work his way into the rotation as a freshman.

Recruitment timeline: Cunningham had 45 offers, but waited until National Signing Day to decide between Stanford, Miami, and Vandy.