Beware the Swag-O-Meter: Mississippi State's 'You're a Baller' artist speaks

Meet the budding icon of postmodern college football recruiting art. SB Nation talked to MSU defensive coordinator Geoff Collins, the man behind the now-famous "Can of SWAG" and "You're a Baller" recruiting notes, and his head coach.

Share All sharing options for: Beware the Swag-O-Meter: Mississippi State's 'You're a Baller' artist speaks

There's a whole book on his desk, plastic sleeves holding some of his most famous works. Lying on top is a recent sketch - the Mississippi State banner M logo shining over a cityscape like Gotham City's Bat-Signal, with a note imploring a potential recruit that only he can help the Bulldogs save the day.

"Here's a personal favorite. The original 'You're a Baller,'" he says while pointing to a photocopied picture of himself with a magic marker word bubble displaying his now-famous mantra.

He won't allow pictures taken of his collection, ever the discriminating artist (also there's a bunch of current and former recruit names on each page, so that's a NCAA violation and stuff). He professes to have never taken a single drawing class in his life - "Nope, not one!" he happily assures - allowing his natural talent to evolve unencumbered by the gauche restrictions of conventional instruction.

This the portrait of the artist Geoff Collins, Mississippi State defensive coordinator and accidental art pioneer, the creator of two of this season's most celebrated works - the raw, minimalist "You're a Baller" and the Warholian "Can of SWAG," which assures the viewer that Collins "has a truckload of it over here in Stark Vegas." 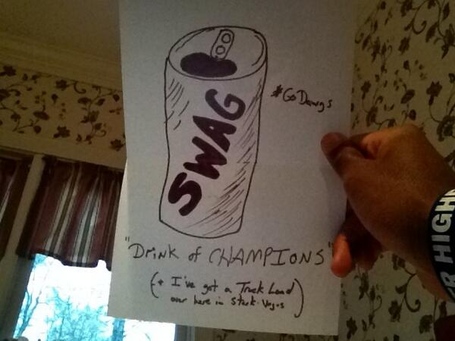 More: Write a recruiting letter to yourself The most letters sent to one recruit ever

Until now Collins was something of the Johannes Vermeer of the college football letter movement, which in years past was a far less adventurous affair. But now that his identity has been found, his story can be told, if only to better understand his art.

"When I was a G.A. at Georgia Tech, that's when I started getting into the whole writing recruiting letters," he says. "When I was there under Coach [George] O'Leary, we had six primary states, and I kept bugging him to recruit. So finally he said, 'OK fine, you've got the other 44 states.' I couldn't go on the road, so I started writing letters and trying to find a way to create a big impact. That year, of those 44 states we had five kids sign. So ever since it's been about trying to garner attention of recruits for whatever school I'm at."

Not surprisingly, as the hand-written letter movement has become the luddite compliment to unlimited digital harassment of college football recruits, recruiting coordinators found a problem: Kids were sharing their huge one-day post office hauls on Twitter and Facebook, but they might have not been actually reading the letters.

Schools like Mississippi State took notice. The Bulldogs changed the size of their envelopes and sometimes the color (opting for solid maroon) just to create a look that would stand out. They'll continue to alter their look to stay noticeable.

"What's the important thing? That a kid got 100 letters in one day, or that he opened one?" head coach Dan Mullen asks.

"You've got to think of the stacks of mail that these kids are getting," Mullen says. "Even if a kid gets 10 letters from us, that probably means he's being recruited by 50 schools. Well that's 500, and we're doing that once a week; that means he's probably getting 500 letters a week. What makes him want to open it?"

Consider Lee Davis, Mississippi State's staff recruiting specialist, the art dealer for Collins' brilliance and one of the first to inform the artist of his newfound fame.

"He came to me and said, 'Oh gosh, this is on the internet.' And well, any publicity is good publicity, right? He said, 'The message is short, sweet and to the point, so the only thing I would change is my handwriting. And honestly, that kid really is a baller.'"

On this particular day I've just missed a sneak peak at Collins' latest masterpiece, an unofficial sequel to "Can of SWAG." The artist himself pops his head into Davis' office to make the announcement:

"There's more to come," Davis insists. "They just haven't been sent out yet. That's why you haven't seen them on Twitter yet."

For all the endless hours of coordination - matching coaches to prospects as pen pals on a daily basis and coordinating the ensuing mass mailings on a year-round schedule - Davis' primary concern as a recruiter is alleviated.

"Now, whoever gets his mail is going to open it."

Indeed. Because somewhere out there in the abyss of the USPS, inside one of a thousand official maroon envelopes and tucked among a litany of Land's End catalogs and credit card offers, "The Swag-O-Meter" seeks its recruit.