Make no mistake: Ohio State abandoned the Horseshoe to play in front of 37,000 fans in Cincinnati's Paul Brown Stadium on Saturday in hopes of strengthening the Urban Empire's recruiting.

CINCINNATI - Despite official claims, Ohio State didn't leave Columbus to break even on a meaningless exhibition because the seats weren't fixed yet. The Buckeyes came south to ensure that the future of the Urban Meyer regime would enjoy as many Adolphus Washingtons as possible.

The former five-star Washington's high school, Taft, is less than two miles from Paul Brown, and the sophomore end was arguably the breakout star of the Scarlet's 31-14 win over the Gray. The Buckeyes will replace their entire starting defensive line in 2013, and Washington finished with four of the Gray team's nine "sacks" of quarterback Braxton Miller, who wore a no-contact jersey.

Ohio State played in front of an announced crowd of 37,643 between Paul Brown Stadium's Bengal-orange end zones Saturday afternoon. That's a staggeringly low count for any kind of Buckeye home game, because even spring ball averages over 60,000 fans in Columbus.

Yet head coach Urban Meyer didn't waste a second wrapping an otherwise newsless press conference in good tidings for his former hometown, a city once thought of as "hostile territory" for the state's flagship university and what Land-Grant Holy Land's Luke Zimmermann calls a "region historically unusually difficult for Ohio State to recruit." 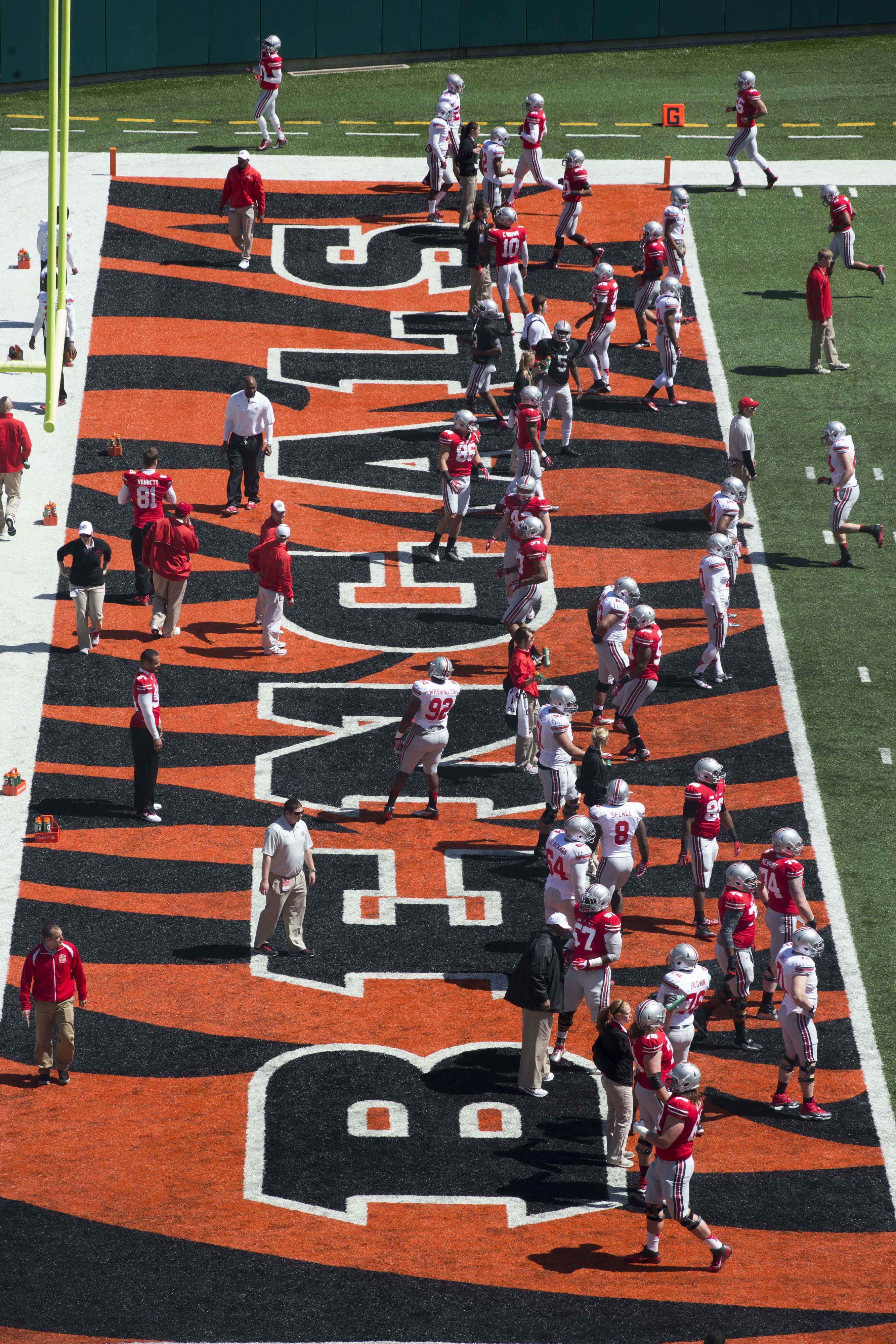 Columbus and Cincinnati are separated by only 100 miles. But culturally, the gap is much wider. Columbus is a center of state government and home to a massive university. Cincinnati is a big, semi-Southern city. Cincinnati is decidedly less Big Ten than Cleveland, Columbus, Detroit, Des Moines, Milwaukee or Indianapolis.
Now, Cincinnati is not Southern like the Deep South. When a Cincinnatian orders tea, it does not come sweet by default. And the accents are not thick. But it does border Kentucky, and there seem to be far more Southerners there than in other parts of Ohio. That creates a different culture, and while the Buckeyes are the No. 1 team in the city, it's not by the margin that it is in most other Ohio cities.
It only makes sense for Meyer to do this. If the Buckeyes had placed a greater focus on the Cincinnati region before 2010, would Springfield's five-star linebacker Trey DePriest have headed South to play for Alabama? I can't say for sure. But any exposure in a talent-rich city that is surprisingly not a stronghold is smart business.

Former head coach John Cooper once said Cincy was harder to recruit than anywhere else in state. The 2013 Buckeyes roster lists just four Cincinnatians, the same number as either Notre Dame's or Louisville's.

"To have almost 40,000 people show up for a scrimmage, there are so many things I wish we could do here [in Cincinnati]," the former Cincinnati Bearcats defensive back said. "Coach Hayes started the tradition years ago when they would go visit a place, he'd take them around and educated the players."

So OSU made it a point to announce it was hitting the Montgomery Inn and Skyline Chili, that the Buckeyes got a special tour of the Reds Museum, and that they even stopped by Bengals head coach Marvin Lewis' house. That's because this region is rich with BCS-level football talent, and for all its seemingly worldwide branding, OSU has yet to truly dominate recruiting it.

"I can tell you for me personally I couldn't be more proud of my town," assistant coach and Cincinnati native Kerry Coombs said. "There's something that fills your heart as a Cincinnati guy to come down 71, and then you turn and there are the buildings. For me, thank you to the people of Cincinnati. This was special for a lot of kids today."

Coombs joined Meyer's staff from UC and is still the area's lead recruiter for the Buckeyes.

"I've been to a lot of spring games when I was coaching high school ball, and to me an environment like that is special. You've got the band and the Jumbotron and you're in a NFL stadium. You're not even in your town. We're not in Columbus and we have a crowd like that. So if I'm a local kid -- if I'm any kid -- and I see that environment, I can't imagine why you'd pick anywhere else if you had the opportunity to come play here." 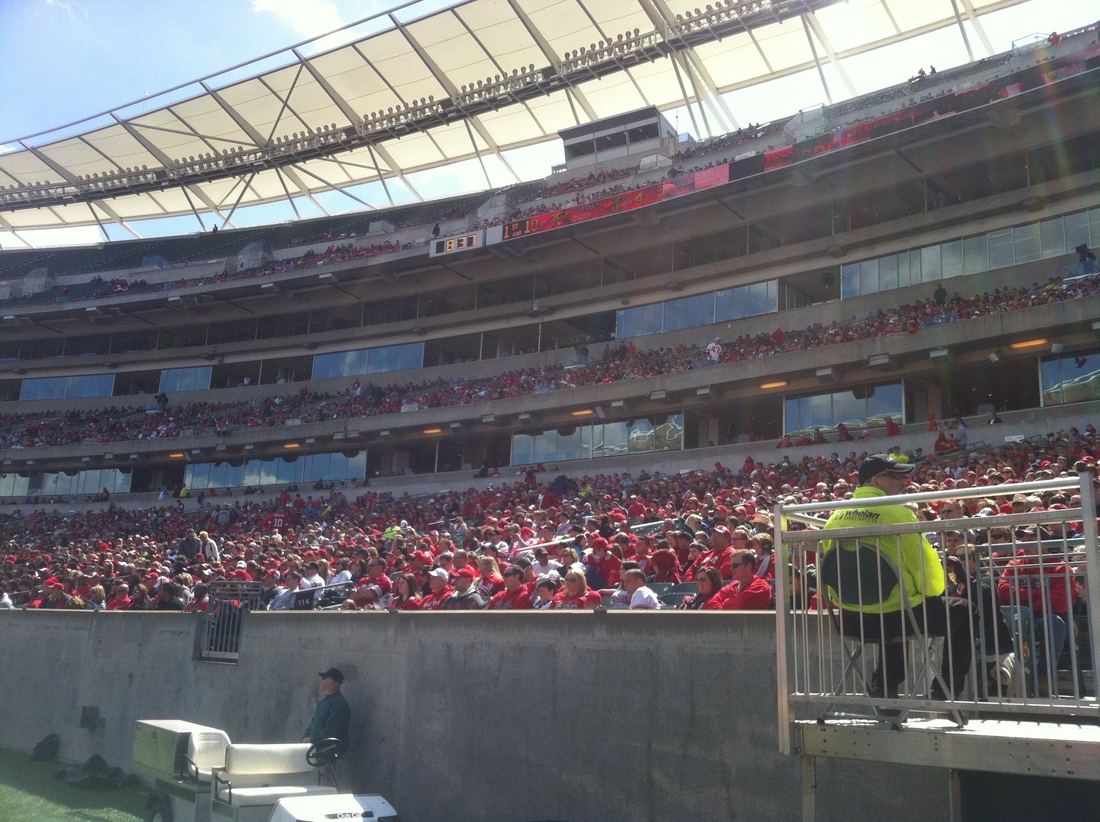 There are seven current commitments for OSU's 2014 class, and linebacker Sam Hubbard is the only current Cincinnati area player (Moeller High). Of the 2013 class, only wideout Jalin Marshall came from the area (Middletown, about 40 miles out). Meanwhile, local guard Dylan Weisman spurned an OSU offer for Tennessee (via Butch Jones leaving Cincinnati).

"Cincinnati kids have certainly always been aware of Ohio State, but their natural allegiances have been more spread out than other parts of that state, when you look at Cleveland or Dayton, for instance, those kids have historically accepted offers from Ohio State immediately," Rivals.com midwest recruiting analyst Josh Helmholdt said.

Helmholdt also pointed to some unusual competition, namely Catholic institutions like Boston College and Notre Dame having a historic backdoor into the city's Greater Catholic League stars like Luke Kuechly and Kyle Rudolph (Zimmermann calls the GCL the "de facto AAA" for the Irish), as well as the suddenly resurgent Kentucky Wildcats.

"Mark Stoops is an Ohio guy, and they're already starting to show a tremendous success in the area. I think [bringing the game to Cincinnati] is Urban making sure that they solidify the borders of Ohio more than anything else."

19 minutes until kickoff and EVERYONE is stomping on the logo. Meyer oversees a bull ring / cat drill. twitter.com/38Godfrey/stat…

Wide receiver prospect Derek Kief, among the five Cincinnati recruits invited to Paul Brown on Saturday, is a standout at GCL member LaSalle and just received an offer from Notre Dame to go along with 16 others. He's the Washington-type talent the entire program uprooted itself for a day to impress and part of the idea behind this national power's pointless April exhibition. They didn't aim for the GIF pool or the heartstrings -- the decidedly more football-centric matter of recruiting was paramount.

Helmholdt will be on hand April 20 for a Rivals-Under Armour camp in nearby Lakota West high school, and will gauge any lingering goodwill from the reinvested interest in the region by Ohio State.

"It shows that they care about the city. That might be a short-term gain though, and moving forward it’s something they’ll have to continue to work at. It was a smaller crowd on Saturday, but how many people there were future high school prospects? Or how many might not be legitimate prospects, but how many will be friends with those kids being recruited?"

• Star quarterbacks of tomorrow: what’s it take to win the Elite 11?