It never stops in Tuscaloosa.

Not that Alabama or the SEC needs any help with recruiting. But after the 2013 NFL draft, in which both the SEC East (32) and West (31) individually had more draft choices than any other conference, it's sure to be on its way. 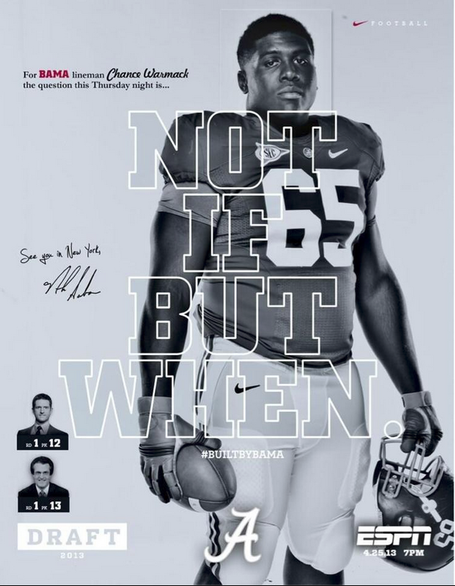 And the SEC's top program wasted no time in quickly letting recruits know about this news. In fact, the Alabama Crimson Tide began pumping up its draft success before its next crop of recruits was even selected. And selected they were, with nine Tide players being drafted. Another five could be signed by NFL teams as undrafted free agents.

Alabama assistant coach Billy Napier, one of Alabama's top recruiters, posted posters like the one of first-round guard Chance Warmack, at right, on his Facebook page Thursday. The caption reads:

"* Speaking of Chance Warmack, he became the sixth top-10 pick that Alabama has had in the previous three seasons. Nick Saban is in the midst of a jaw-dropping run. Since 2009, the Crimson Tide has had 14 first rounders -- doubling the next highest SEC team (Florida) and surpassing the Big Ten teams combined (13)."

There's no doubt as to the target audience here: recruits.

No team has recruited better than Alabama in the last five years, and the payoff is evident, with three national titles in four years and an unmatched draft lot numbering 33 draft choices.

Now Nick Saban has something of a self-sustaining cycle. Great recruits see how many players Alabama is sending to the NFL, which makes them want to come to Tuscaloosa, which fuels championship runs, and ultimately more NFL draft choices. Wash, rinse, repeat.

The Tide currently has four commitments in its 2014 class and will again make a run for the top class in the country.