The John Curtis deep threat is also an elite track athlete in his classification.

Ratings: A consensus four-star prospect in the 247Sports Composite rankings, Dupre is the no. 5 player in a strong Louisiana class, the no. 2 wide receiver nationally, and the no. 37 player overall.

There's a play on Dupre's highlights from his junior season where he breaks open on a post route, the quarterback heaves the ball down field, and a teammate on the sideline immediately holds his hands in the air to signal a touchdown.

And Dupre hauls in the pass for a touchdown, naturally.

Curtiss operates a run-heavy offense out of a base two-running back set, with only two wide receivers. So when they throw the ball deep, they throw it to Dupre, who is often running past overmatched cornerbacks and safeties headed towards the box to stop the running game.

The 2013 Louisiana 3A state champion in the high jump, long jump, and triple jump, Dupre demonstrates those aerial skills on the football field as well, outjumping opponents for the football and using his big, strong hands to bring it in. 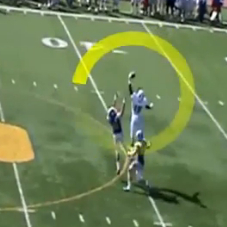 Because of that size and leaping ability, Dupre has a larger margin for error with his route running than smaller prospects who can't elevate as well as he does. It also makes his listed 40 time of 4.58 less significant since his quarterback can simply throw him open -- not that running a strong 40 is the most important skill for a wide receiver, anyway.

With his height and solid frame, Dupre is virtually unstoppable at the Louisiana 3A level when he gets a clean release off the line of scrimmage. On post routes, opponents don't really have a chance against him.

When Dupre arrives in college, he probably won't have command of the full route tree, but he still has a chance to contribute early because of his hands, leaping ability, and knack for getting open deep.